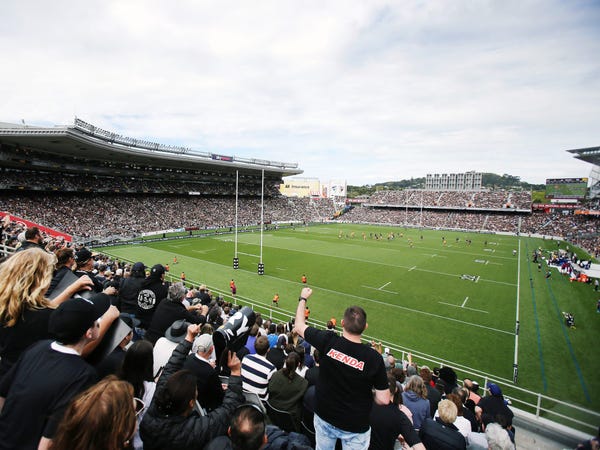 Sports fans around the world are anxiously awaiting the go-ahead to return to their home stadiums and cheer on their favorite teams in person.

But in New Zealand, that dream is already a reality.

New Zealand's government and medical leadership have been amongst the world's best at handling the coronavirus pandemic. The country has had fewer than 2,000 total cases since COVID-19 began devastating the rest of the planet earlier this year, and as of this week, Prime Minister Jacinda Ardern's nation has just one active case of the ultra-contagious virus.

As a result, New Zealanders have enjoyed a safe return to pre-pandemic normalcy — no masks, no fear of COVID-19 spread — that includes nearly 50,000 fans packing a stadium to support their beloved rugby team.

The rest of the world has not been nearly as fortunate. In the United States and Europe, cases of COVID-19 are surging at rates not seen since early in the summer. Still, most professional sports leagues have returned in some capacity, and in some regions, fans have been encouraged to return in person. Whether that's safe, however, is a different question.

After his Florida Gators lost to Texas A&M, head coach Dan Mullen called for fans to return to The Swamp in droves. But mere days after vocalizing that he thought welcoming 90,000 people to Ben Hill Griffin Stadium was a good idea, Mullen himself contracted COVID-19.

Similarly, NFL officials have said they're hopeful they'll reach full capacity at Raymond James Stadium for Super Bowl LV in February. And Florida Governor Ron DeSantis has given sports franchises the go-ahead to lift restrictions on fan volume in their stadiums.

As recently as Monday night, some 25,000 spectators packed into AT&T Stadium to watch the Dallas Cowboys lose big to Kyler Murray and the Arizona Cardinals. And while most fans appeared to respect socially distancing protocols and wear their masks, the risk of coronavirus spread remains much more significant than in New Zealand.