As bushfires continue to ravage the country and many within the political class spend much of their time firing potshots at their opponents in a sad and sorry blame game, our sports stars are helping the nation heal. 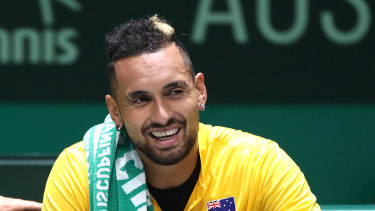 Nick Kyrgios has put his money where his mouth is.Credit:Getty Images

One of our most divisive and enigmatic stars, Nick Kyrgios was one of the quickest off the mark, calling on Tennis Australia to organise an exhibition "to raise funds for those affected by the fires". For its part, Tennis Australia responded swiftly, announcing an Australian Open Rally for Relief exhibition event to raise money for the bushfire relief and recovery efforts.

Kyrgios has also put his money where his mouth is, tweeting to his thousands of fans that he’ll be donating $200 for every ace he hits across all events he plays this summer. He then followed up by hitting 20 aces in his first match in the ATP Cup, raising $4000. Kyrgios’s teammates for the ATP Cup, Alex de Minaur, John Millman and John Peers also pledged to donate every time they hit an ace this summer. This led to organisers of the ATP Cup committing to donate another $100 per ace for the entire tournament, which will probably raise more than $150,000.

And on it goes: Australia’s highest-ranked tennis player, Ash Barty, will donate all of her winnings from playing in the Brisbane International to the bushfire relief and recovery efforts. If she wins the tournament, her donation will total $360,000. Go, Ash! 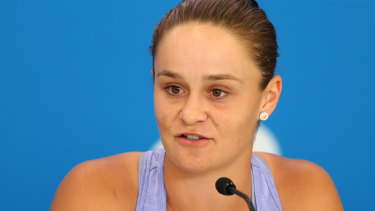 Ash Barty will donate all of her winnings from playing in the Brisbane International to the bushfire relief.Credit:Getty

But it’s not just Australians showing this remarkable generosity. Russian tennis star Maria Sharapova has committed to donating $25,000. Nor is it just the sport of tennis. Every player from the BBL’s Perth Scorchers will donate to the cause and the club has committed to match every dollar.

Across the ditch, New Zealand's NBL team, the NZ Breakers, will donate $1000 for every three-point basket scored during their win over South East Melbourne Phoenix on Sunday. They scored 13 three-pointers and their CEO and managing partner Matt Walsh matched the $13,000 donation with $13,000 of his own.

Professional Footballers Australia has committed to donate $1000 for every goal scored during this round in the A-League and W-League and Essendon’s Adam Saad and Darcy Parish helped a Pascoe Vale café by posing for photos with fans in exchange for a $5 donation to support the CFA Bushfire Disaster Appeal. No effort is too small.

When a disaster of this magnitude strikes our country, it is difficult to consider that sport really matters at all. But perhaps, symbolically at least, this is when sport matters most, for it illustrates just how much the games we play and those who play them represent our way, our culture and our values.

While a small few within society continue to use this disaster as a means of political point-scoring, most Australians, from t the outback to the in inner city, are thinking of those affected. And as those who have been affected by the fires shake their heads, cry and reflect on what they’ve lost with broken hearts, our hearts are breaking for them.

The sports stars of Australia, and indeed the world, reflect this. Today, more than ever, they have a powerful voice and they’re using it to tell those who have lost a little or all: "We’re thinking of you, we support you and we want to help."

Sam Duncan is a lecturer in sports media and marketing.