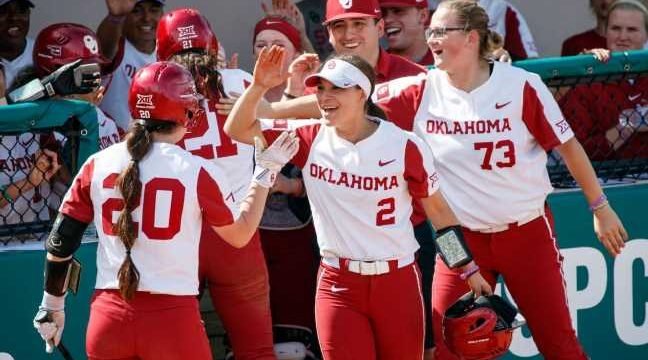 Oklahoma was unveiled as the No. 1 overall seed in the 2019 NCAA softball tournament when the bracket was revealed on Sunday.

The top-ranked Sooners (49-2) bring a 39-game winning streak into the tournament, which is a Division I single-season record and eight wins shy of the 47 consecutive games Arizona won across the 1996 and 1997 seasons.

Oklahoma’s most recent loss came on Feb. 22 to UCLA (46-5), which got the No. 2 seed on Sunday. The Bruins are led by reigning Pac-12 player and pitcher of the year Rachel Garcia, who is one of two collegiate players chosen to represent Team USA this summer.

Reigning national champion Florida State (51-8), the only other team to beat Oklahoma this season, is the No. 4 seed. The Seminoles defeated North Carolina on Saturday to earn their sixth consecutive ACC tournament title. Meghan King, who won both games of the championship series a year ago in Oklahoma City, led the Seminoles with a 29-5 record and a 1.36 ERA. FSU is the only seeded team from the ACC.

Washington (45-7), the runner-up a season ago, is seeded third this year.

For the third year in a row, all 13 SEC teams made the 64-team tournament field, with Florida (fifth), Alabama (eighth), LSU (10th), Ole Miss (11th), Tennessee (12th) and Kentucky (14) among the top 16 seeds. The six seeded teams mark the most seeded teams of any conference.

Florida, which won the SEC tournament title on Saturday with a 2-1 win over Alabama, seemingly got the most generous seeding of the SEC teams. Although they won the most recent encounter with the Tide, the Gators were swept in three games by Alabama last month in Gainesville. Alabama (52-7) was ranked fourth in the most recent ESPN.com/USA Softball Top 25, and Florida was ranked 11th. The Tide have the most wins of any team in the tournament.

The double-elimination regional round begins Thursday and concludes Sunday. The 16 winners advance to super regionals, which will be held at eight sites May 23-26. Eight teams advance to the Women’s College World Series in Oklahoma City, which opens May 30. The 2019 national champion will be crowned June 4 or 5.