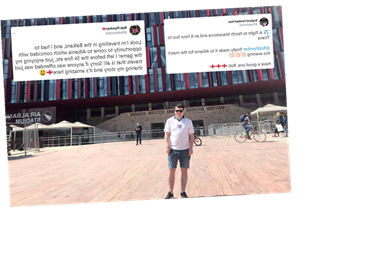 AN ENGLAND fan has not let the coronavirus pandemic prevent him from following Gareth Southgate's men to Albania.

Rob Pomfret posed for a picture in the sunshine outside the Air Albania Stadium just hours before kick-off.

But he'll have to enjoy a cold one in a local bar during the contest as no fans are allowed inside the stadium.

The passionate fan jetted to North Macedonia to travel the Balkans before the government imposed £5,000 fines for heading abroad.

He then took an eight-hour bus to Albania's capital Tirana to cheer on Southgate and Co on behalf of the nation.

Rob celebrated his arrival by posing in an England shirt outside the stadium and uploaded a picture of a pint of lager in a local bar.

His trip has received a mixed reaction with the majority of supporters jealous of his journey.

One wrote: "Ignore the jealousy, enjoy your travels."

Another added: "Enjoy it mate, ignore the hate you're getting. Very jealous."

But others were quick to point out on social media that he should receive a fine.

After a backlash, he defended his journey by writing: "Look I’m travelling in the Balkans, and I had to opportunity to come to Albania which coincided with the game!

"I left before the 5k fine etc, just enjoying my travels that is all!

"Sorry if anyone was offended was just sharing my story and it’s amazing here."

The World Cup qualifier was at risk of being postponed over police security fears.

Nearby bars and restaurants around the stadium remained open and police said they couldn't guarantee security as many of the venues have large window panels and outside tables and chairs.

But it was given the green light despite the Albanian Football Association's best efforts to have vaccinated supporters inside the stadiums.

The AFA asked the government whether 6,500 fans could attend the contest but it was rejected.