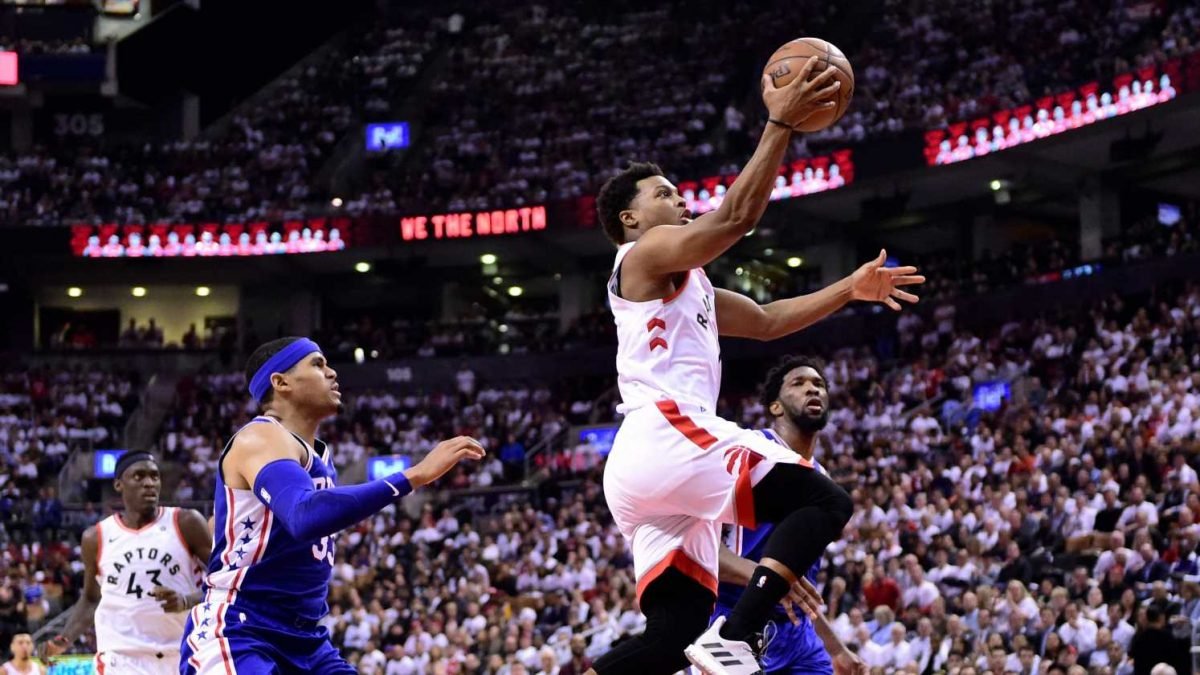 The Raptors put on a show for the home fans in Toronto on Tuesday night while taking firm control of their Eastern Conference semifinals series with a 125-89 drubbing of the Philadelphia 76ers in Game 5.

Six Raptors scored in double figures, led by Pascal Siakam with 25 points and eight rebounds. Kawhi Leonard added 21 points and 13 rebounds as the Raptors built a huge halftime lead and sailed the rest of the way as the 76ers never found a rhythm.

The Raptors will take a 3-2 series lead back to Philadelphia and can close out the series on Thursday (8 p.m. ET, ESPN). The winner of this series will play the Milwaukee Bucks or Boston Celtics in the Eastern Conference final.

Kyle Lowry (7), driving basket against the 76ers during the second half, scored 19 points in Game 5 in Toronto. (Photo: Frank Gunn, AP)

Jimmy Butler led the Sixers with 22 points, but the rest of Philadelphia's stars were nowhere to be found.

Joel Embiid (13 points) appeared less than 100%, and Ben Simmons (seven points) was a non-factor. Embiid started despite missing the morning shootaround because of flu-like symptoms. He also battled illness in Games 2 and 4. Simmons didn’t score his first points until a three-point play with 5:34 left in the first and his team trailing 44-32.

The Sixers looked listless for most of the contest, missing shots on the offensive end while allowing the Raptors too many open looks. Toronto hit the 100-point mark with more than nine minutes left in the fourth quarter, and it wasn't long before both teams took out their stars.

OPINION: Why the Celtics' season didn't go as expected

NUGGETS COACH ON SCHOOL SHOOTING: 'This is an epidemic'

The game was close in the first quarter with Toronto taking a 27-26 lead to close out the opening 12 minutes. But the Raptors let loose in the second, building a double-digit lead in the first six minutes before ending the half up 64-43.

The Raptors got a scare midway through the first quarter when Leonard inadvertently elbowed teammate Serge Ibaka on the forehead. Ibaka went down to a knee and grasped his head as the trainer came out to attend to him. Ibaka's hand revealed blood from the abrasion on his head.

Serge Ibaka heads to locker room with apparent cut on his forehead pic.twitter.com/Mag8RehYZW

He walked back to the locker room with a towel pressed to his forehead but returned early in the second quarter with a bandage on his head and no noticeable impairment. Ibaka needed three stitches to close the cut on his forehead.