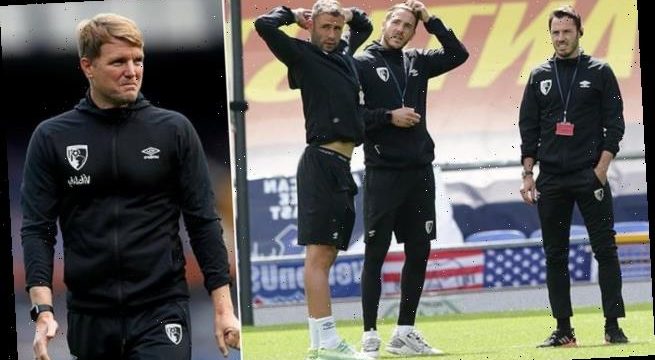 RELEGATION BATTLE LIVE: Latest score and updates from Arsenal vs Watford, West Ham vs Aston Villa and Everton vs Bournemouth

Aston Villa, Watford and Bournemouth all look to avoid relegation from the Premier League with only one of them not dropping to Championship next season.

Villa travel to London Stadium this afternoon to take on West Ham as they currently sit outside the relegation zone following their 1-0 victory over Arsenal last week.

Watford will be hoping they can have the same success over the Gunners as they look for a similar result to Dean Smith’s men with the Hornets behind Villa on goal difference.

Bournemouth will need a miracle and both Aston Villa and Watford to lose and a win against Everton with their fate then based on goal difference and if that does not separate them goals scored.

Sportsmail will provide live Premier League coverage of Arsenal vs Watford, West Ham vs Aston Villa and Everton vs Bournemouth.

Here’s what each of the three imperilled teams at the bottom of the table need to do this afternoon to stay in the Premier League.

They begin the afternoon one place above the relegation zone but by goal difference alone as they’re tied on 34 points with Watford. Remarkably, they’re just one goal better off.

To put it simply, Villa need to match or better Watford’s result this afternoon to stay up.

However, if Villa lose to West Ham AND Watford lose to Arsenal, then Bournemouth will condemn them both to relegation if they beat Everton.

If Villa win at West Ham, Watford would need to win and better Villa’s result by two or more goals to correct that goal difference and stay up.

If Villa draw, Watford will stay up if they beat Arsenal.

If Villa lose, Watford need only a point to survive.

It’s pretty simple for the Cherries. They need to beat Everton and hope that both Villa and Watford suffer defeats. 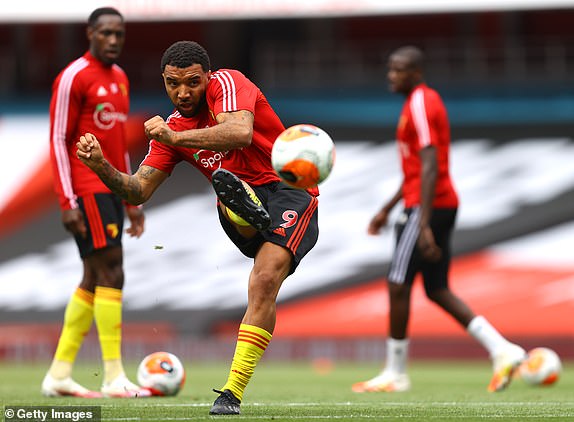 Just 10 minutes to go now and the action will be underway.

The Aston Villa players gather round for a huddle and final team talk on the pitch at the London Stadium. Some crucial last instructions, perhaps.

At Goodison Park and the Emirates Stadium, the team head back to the changing rooms for those final preparations. 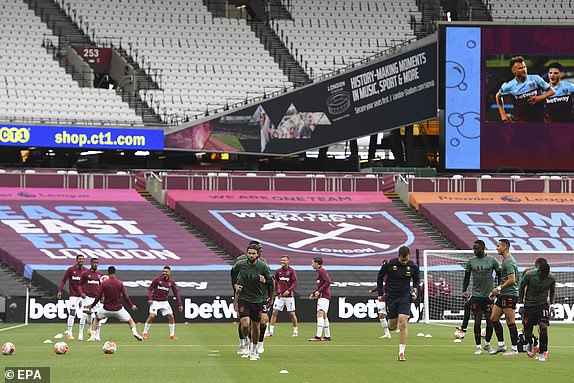 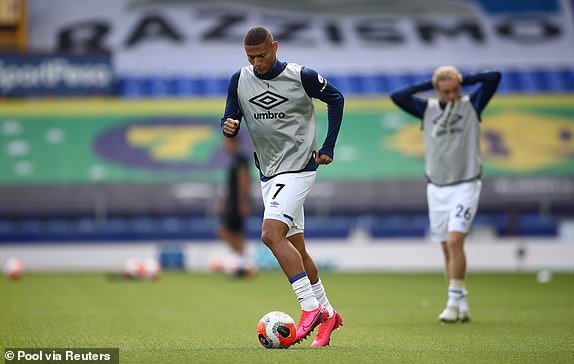 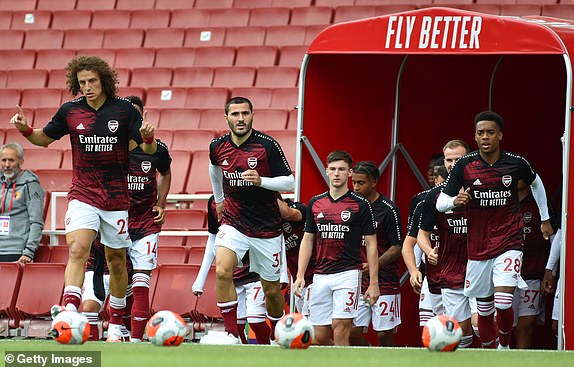 Watford will accelerate their plans to appoint a new manager after the Premier League season finishes on Sunday, according to reports.

The club sacked Nigel Pearson with two games remaining and put Hayden Mullins in temporary charge, but the academy boss faces a battle to keep the team in the top-flight.

The Evening Standard report that the Hornets are waiting to see which division they will be playing in next season but former Leicester boss Claude Puel has emerged as an early favourite.

Eddie Howe has hinted that he wants to continue as Bournemouth boss whatever happens in Sunday’s decisive Premier League relegation scrap at Everton.

In order to survive, Bournemouth must win and need Watford to lose at Arsenal and Aston Villa to be beaten at West Ham.

Howe, who joined the club as an academy graduate defender in 1994, said: ‘My commitment to the club has never changed, from day one onwards. I do my best for the club and that will not change.’

There really isn’t long to go now until we get underway in our three relegation battle games.

The Aston Villa manager Dean Smith has just been speaking on BT Sport.

‘We have shown a lot of character over the last few weeks. When we came back for project restart, a lot of people had us relegated already.

‘Our performance levels and the process we trusted what we were doing, we are tough to play against and tough to beat but small moments didn’t go our way. But they have in the past three games.’

On whether West Ham being safe might help Villa…

‘I don’t think David will allow them, he wants them to finish as high as they can and get as many points as they can. They won’t be laying down.’

On news from the other games…

‘I don’t really want to know in the first half as it won’t affect what we’re doing. We have to go and win a game.’

Let’s be honest, we absolutely love it when the relegation battle goes right down to the wire.

And there have been some terrific escape acts on the final afternoon during the history of the Premier League.

You can savour some of them here. 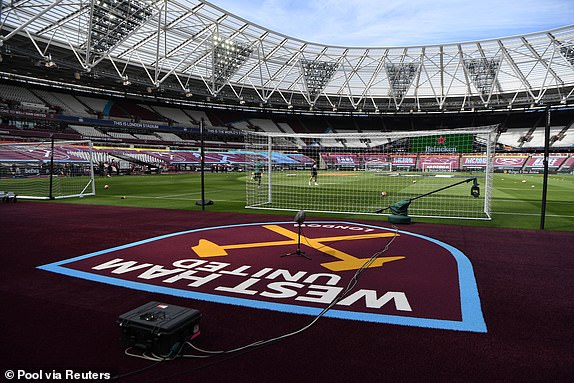 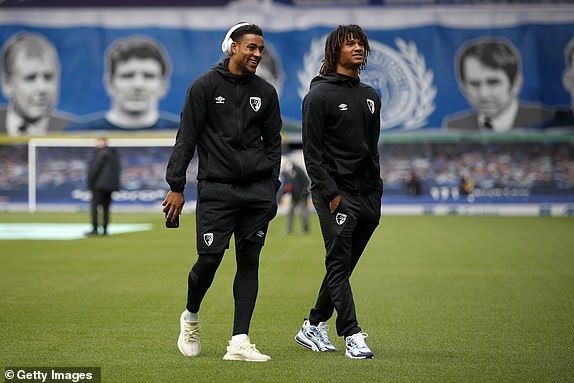 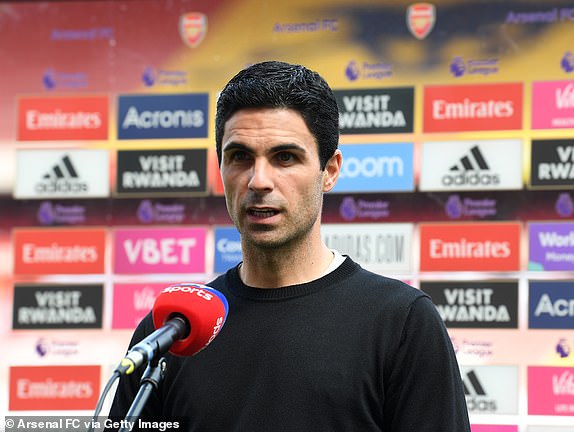 Never one to shy away from the spotlight, Troy Deeney’s feud with Arsenal started in October 2017, with a last-minute winner and an abrasive post-match interview.

‘Well, I’m not going to be one to tell Mr Wenger [Arsenal manager at the time] about himself, but there’s a reason that they lost and it wasn’t because of one penalty…’ began Deeney, in an interview which would overshadow every fixture between Watford and the Gunners in the years that followed.

‘It’s having a bit of cojones. Whenever I play against Arsenal, I’ll go up and think “let me whack the first one and see who wants it.”

We should have confirmation of the team line-ups for this afternoon’s games in the next few minutes.

West Ham are unbeaten in their past four home league games against Aston Villa without conceding a goal (W2, D2).

Aston Villa haven’t won their final league match in any of the past eight seasons (D2, L6).

Their only away league victory in 14 attempts came at Burnley on New Year’s Day, and they are on a current winless run of seven (D3, L4).

It’s 25 successive away games without a clean sheet in the Premier League for Villa since a 0-0 draw with West Brom in January 2016.

Dean Smith’s side have conceded 23 Premier League goals in the final 30 minutes of away matches this season, seven more than any other side.

Trezeguet has scored three goals in his last three appearances, as many as he had in his 30 previous Premier League games.

It really would be a miraculous escape if Bournemouth could pull it off this afternoon. Not only do they have to win but they need two other teams to lose! But stranger things have happened and their opponents Everton have been ‘on the beach’ for a while. 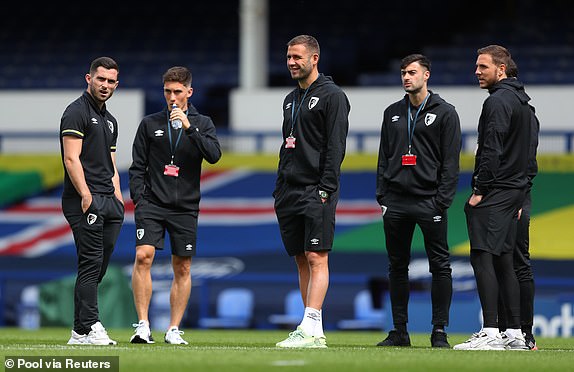 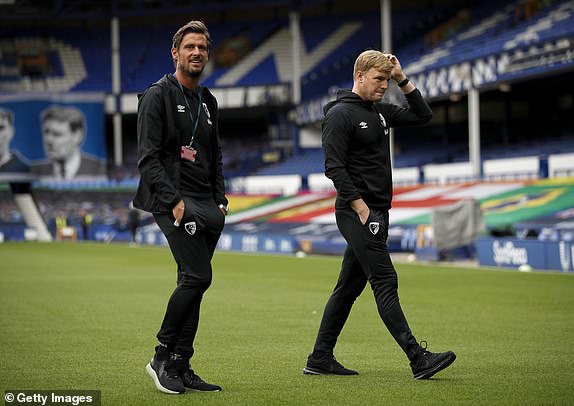 It seems like nearly anything can happen on the Premier League final day.

Players are just one game away from jetting off on their summer holidays and focus can be an issue – especially if their team has nothing left to play for. Historically, top flight stars have been accused of ‘being on the beach’ after a poor showing.

For others, the entire season could still be at stake, and the contrasting motivations can lead to some bizarre scorelines and stories as teams desperately scrap for the title, top four or relegation.

Ahead of the final day, Sportsmail has taken a look back at some of the strangest matches at the end of a Premier League campaign.

Everton have won all six competitive home matches versus Bournemouth – including four in the Premier League – by an aggregate score of 20-7.

Bournemouth defeated Marco Silva’s Everton 3-1 in the reverse fixture this season.
There have been 35 goals scored in nine Premier League meetings, an average of 3.9 per game.

Bournemouth will be relegated unless they win and both Aston Villa and Watford lose.
They have won eight of their 37 Premier League matches this season. The fewest wins by the Cherries in a full league campaign is nine in the 1933-34 Third Division South.

They could experience 10 successive away league defeats for only the second time in their history.

This is the Cherries’ eighth consecutive season playing their final league game away from home. They have won just two of the previous seven (D2, L3).

Callum Wilson has scored three goals in his past 27 Premier League appearances. 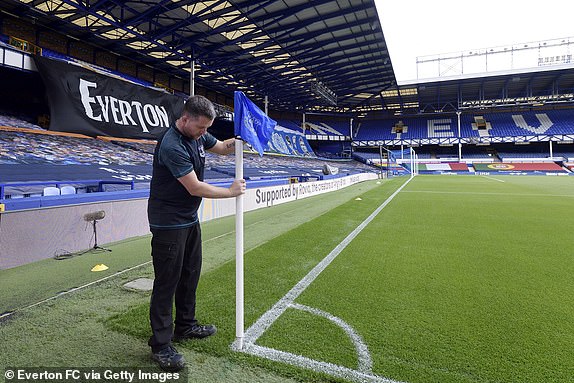 Love it or hate it, there’s no question it has changed the complexion of Premier League football and certainly affected the table.

But where would your club be in the standings without VAR? Take a look at this analysis by the Mail on Sunday Football Lab to find out.

All of the games will be played simultaneously. Kick-off is 4pm UK time

Burnley vs Brighton and Hove Albion

Arsenal have won five of their six Premier League home games against Watford, keeping a clean sheet in each of those wins.

Watford have scored the opening goal in just one of the 13 Premier League meetings between the sides – that was in their only league win at the Emirates Stadium on 31 January 2017, when Younes Kaboul and Troy Deeney netted inside the opening 13 minutes.

Their only other win at the Emirates came in an FA Cup quarter-final in March 2016.

The Hornets have only won their final match of a Premier League campaign once before, beating Coventry 1-0 in 1999-00.

Since then, they have drawn two and lost three of their five top-flight matches on the final day.
Watford are winless in seven Premier League away games, losing each of the last five, while their two wins on the road this season have come against the teams currently below them: Bournemouth and Norwich.

Their only clean sheet in 14 league matches came in the 3-0 win against Liverpool on 29 February.

Of course, I really hope you stay with me and follow all the relegation drama over the next few hours but if you’d rather keep tabs on the race for the Champions League places involving Manchester United, Chelsea and Leicester then click on the link below. 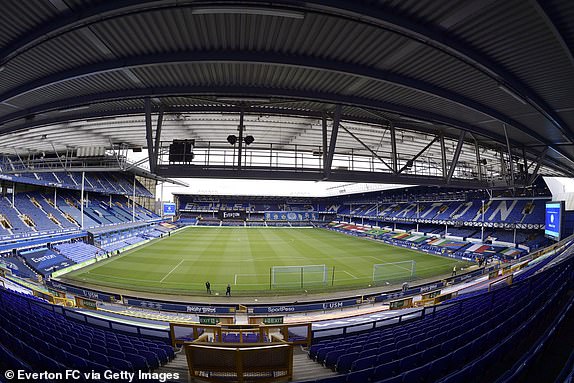 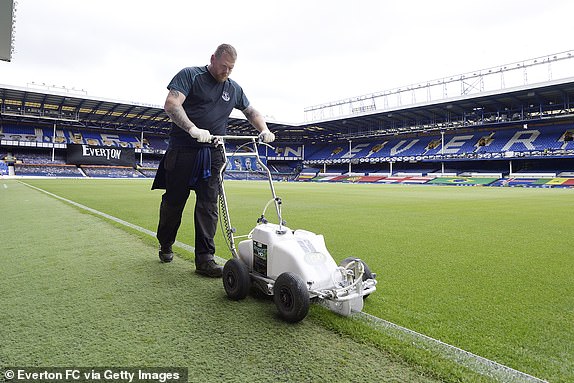 Here’s what each of the three imperilled teams at the bottom of the table need to do this afternoon to stay in the Premier League.

They begin the afternoon one place above the relegation zone but by goal difference alone as they’re tied on 34 points with Watford. Remarkably, they’re just one goal better off.

To put it simply, Villa need to match or better Watford’s result this afternoon to stay up.

However, if Villa lose to West Ham AND Watford lose to Arsenal, then Bournemouth will condemn them both to relegation if they beat Everton.

If Villa win at West Ham, Watford would need to win and better Villa’s result by two or more goals to correct that goal difference and stay up.

If Villa draw, Watford will stay up if they beat Arsenal.

If Villa lose, Watford need only a point to survive.

It’s pretty simple for the Cherries. They need to beat Everton and hope that both Villa and Watford suffer defeats.

It would be the obvious place to begin, wouldn’t it…

A reminder that the games we’ll be concentrating on, all starting at 4pm, are:

It’s been an extraordinary Premier League season that has lasted almost a full 12 months with the entire world changing beyond recognition in the meantime.

There may not be supporters in stadiums at the moment but that won’t make a final day relegation ding-dong any less nerve-shredding.

All we know for certain entering this final 90 minutes of the season is that Norwich City are definitely down and West Ham, Brighton and everyone above them are definitely safe.

But two of Watford, Aston Villa and Bournemouth will end the afternoon in the Championship. Only one will be a Premier League club next season.

It promises to be a shifting sand of a final afternoon, with the picture changing all the time as the goals go in.

So welcome along to our live blog as we try and make sense of it all. We’ll be focusing exclusively on the relegation battle in this live blog so stay tuned. 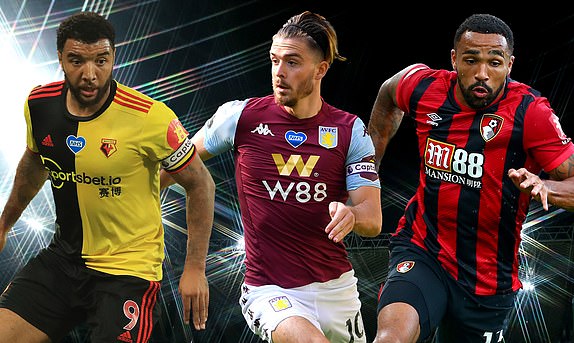