In a week awash with great sports stories, for my money the loveliest was about the beginnings of Peter Bol’s extraordinary career as an 800-metre runner. It was his former teacher at Perth’s St Norbert College, Helen Leahy, who as recounted by Heather McNeill, told the story to that city’s Radio 6PR on Monday.

“I had to organise my team for the athletics carnival,” she said. “As a lot of teachers will know, it’s difficult to fill races sometimes and I didn’t have anyone to run the 400m.”

What to do? At this very moment, one of her students speaks up.

Peter? The lovely lad who had fled war-torn Sudan and first came to Australia as an immigrant at the age of six? Well, there’s no doubt he looks like a runner.

Very well then. What does she have to lose?

“Go get him,” she commands. 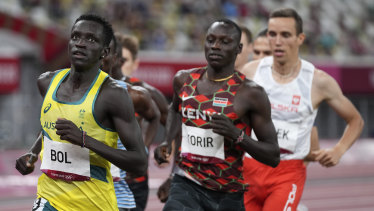 Peter Bol pushed hard in the 800m final in Tokyo.Credit:AP

The lithe, if now quizzical, 16-year-old is soon standing before her.

That’s once around the track.

And could he what. At the athletics carnival, he runs like a scalded hare to win by a country mile, whereupon she has another question.

Yes, Miss, he can do that too.

This time he wins by no less than 100 metres. Everyone is stunned, not least Peter Bol himself and Leahy. But she does not leave it there, quickly enlisting her father Brian Moore to take the lad in hand.

After securing the blessing of the Bol family, Moore starts to do some coaching, signs him up to the local athletics club, and gets him some running shoes.

In his discussions with the parents, Moore said his primary interest in helping was because Bol was such a fine young man, first and foremost, and the fact he could run so fast was a happy bonus.

And they all lived happily ever after, with Bol finishing a highly creditable fourth at the Tokyo Olympics on Wednesday evening, next man along from the podium. Lovely, yes?

Another week, another example of Novak Djokovic displaying a distinct resemblance to a definitive dickhead. It was not just throwing and smashing racquets around in the Olympics on his way to singles defeat in the bronze medal round. It was, in a fit of pique, suddenly pulling out of the mixed doubles bronze medal round, leaving fellow Serbian Nina Stojanovic – who had grown up with Djokovic as her hero – high and dry, with no chance to win a medal. What kind of idiot does that? And yes, I know of the subsequent claims of injury, but what else was he going to say?

Just imagine if Nick Kyrgios had done the same. There would have been an explosion, and rightly so. In the case of Djokovic, however, there seemed little more than a collective shrug and a reckoning that this was just, “Novak being Novak.”

You booze, you lose

TFF has already had a rant about the deep disappointment many in the rugby community have felt about the Australian sevens players disgracing themselves on the way home from the Olympics. I said, and I meant, the key offenders have to have their papers marked NTA, “Never to Tour Again”.

There was still more agony to come for the Wallabies with three of their number stood down in Auckland, for carrying on drinking after the coach had told them to shut it down.

Yup, I know that in the range of atrocities we have seen footballers get up to while under the influence, the Auckland one is about the mildest possible, but good on coach Dave Rennie for standing them down. Whatever the result of Saturday’s match against the All Blacks, you don’t want blokes out there who don’t get it, who have so little discipline they’re happy to get on the piss.

They are not NTA, but at least the whole team should get the message. 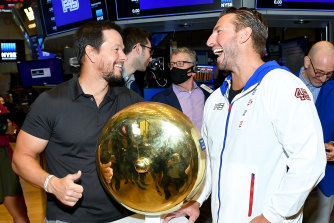 Not only is Gilchrist the owner of “the Giltinis”, the professional rugby team in Los Angeles that just beat Atlanta in the American grand final in the Los Angeles Coliseum, but he’s also a former Australian Schoolboy and Australian under-19 front-rower, who played with the likes of Phil Waugh and Stirling Mortlock, before injury cut short his rugby career and sent him into franchising.

When I asked Waugh about Gilchrist’s success, he laughed.

“I am not surprised. His business career was exactly like his rugby career. He was always one to lean in and have a crack with lots of energy and optimism. When rugby stopped for him, he just did the same in business, and look at him now.”

To which Mortlock adds: “He was an uncompromising, very mobile prop. A great team man.”

Former Australian Olympian Tamsyn Manou on Channel 7 commentary, after Australia’s Rohan Browning won his 100m heat despite it boasting previous world champions and record-holders: “We have a sprinter! Yohan Blake has looked across and you know what he’s thought? ‘Who is that in lane one? I’ve been beaten by an Australian!’ Yes you have, Yohan Blake!”

Cate Campbell on coming perilously close to being disqualified for jumping early in her triumphant last leg in the 4x100m medley relay team: “You’ve got to risk it to get the biscuit, and I’m glad we got the biscuit.”

Australia’s Ash Moloney on how he got through the 1500m to take bronze in the Olympics decathlon, with teammate and mentor Cedric Dubler, pacing him and screaming imprecations at him for the last lap, to “@$*[email protected] well go HARDER, mate!” : “[I was] just putting one foot in front of the other. I started hitting a wall at 800m and I was a bit concerned but I was like, ‘just stick to Cedric. Don’t let him get too far away’. I executed and he screamed like a . . . nutter. I could hear his voice bouncing in my cranium like a bat out of hell.”

Peter Bol after his fantastic run in the 800m: “I didn’t know if I was going to win but I knew one thing for certain, that the whole of Australia was watching. That carried me on. I loved that part.”

Megan Rapinoe after the USA lost to Canada in soccer: “So yeah, it’s a bitter one to swallow. Obviously we never want to lose to Canada. I don’t think I’ve ever lost to Canada.” Shades of Al Capone’s famous line:“I don’t even know what street Canada is on.”

Rafael Nadal on Novak Djokovic’s poor behaviour at the Olympics: “The image is not the best. It is important to avoid this type of situation, and more if you are a reference for many children.” Translated? Rafa thinks Novak is a dickhead.

The Russian Olympic Committee takes aim at trolls insinuating some of their winning athletes aren’t clean: “English-language propaganda, oozing with verbal sweat in the Tokyo heat. Through the mouths of athletes offended by defeats. We will not console you. Forgive us those who are weaker. God is their judge. He is our helper.” We are a long way from Kansas, Dorothy, and this is seriously weird shite.

Shane Gould is a fan of Ariarne Titmus: “I’d love to meet the family and Ariarne and congratulate her myself and answer any questions she had. She is going to have to grow into being Australia’s new sporting heroine.”

Australian high jumper Nicola McDermott: “I can have expectations on me but … I am like a Teflon stick-free pan – it just falls off me because I do it for God, I don’t do it for myself. If I come last I am still a champion and I know that. I am like ‘come on board with me let’s see what happens’.” 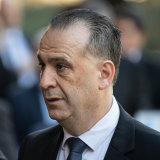 Peter V’landys after the northern hemisphere nations were unhappy with the Rugby League World Cup being postponed:“They have to understand that, like it or not, Australia is a sovereign nation that makes decisions as a sovereign entity.” Welcome to the Australian Republic Movement, Peter, great to have you.

V’landys gets bonus points for the historical quip: “I just can’t believe the amount of name-calling. I had to pinch myself to make sure Governor Macquarie wasn’t still in power.”

On ABC’s Australian Story, Michael Jordan on Luc Longley not being in The Last Dance: “I can understand why Australia would say, ‘Well, why wouldn’t we include Luc?’ And we probably should have. And if I look back and could change anything, that’s probably what I would have changed.”

Team of the week

Emma McKeon. I am not quite sure where she sits in the Australian sporting pantheon, only that it is right up there. Her four golds – count ’em, four – and three bronze in Tokyo, make her just the second woman ever to win seven medals of any colour in a single Games. Her overall Olympics tally of 11 medals makes her the most successful Australian Olympian ever. No other Australian has more than nine. And she’s still only 27.

Australian team in Tokyo. This could prove to be the most successful Games ever in terms of gold, if we beat the 17 from Athens, and we’ve left a few on the table. Swimming won 20 medals (nine gold, three silver, eight bronze) which is the same as the 20 of Beijing but a better split (six gold, six silver, eight bronze).

Keegan Palmer. The 18-year-old from – well, where else would he be from but the Gold Coast – won a gold medal for Australia in skateboarding.

Andrew Hoy. The 62-year-old Australian equestrian became our oldest Olympic medallist, after winning a team silver and an individual bronze in Tokyo.

Wallabies. Feast of rugby on Saturday as they take on the All Blacks at Eden Park. Then it’s the last men standing in the deciding Test of the Springboks v Lions series.

RIP Dr Bernie Curran AM. 1945-2021. The great man passed away this week. An integral part of the Newcastle Uni community for more than 50 years as a student, rugby player, sports leader, academic, mentor, fundraiser, active alumnus, donor, researcher and, most of all, a compassionate friend to many. I knew him through rugby, but he was great of heart, mighty of spirit and a champion of the uni for all of its days.

Never miss a medal or great sporting moment with our Olympic update emailed daily. Sign up for our Sport newsletter here.