Washington snapped New York’s winning streak at nine and point streak at 12. The Capitals have won six in a row and 10 of their past 11 to move ahead of the Islanders into first place in the East Division.

Ovechkin is a big reason for that. The longtime captain has goals in four consecutive games and five of six and is tied with longtime running mate Nicklas Backstrom, who also scored, for the team lead with 12 this season.

Goal No. 718 was classic Ovechkin: a one-timer on the power play from his favorite spot just inside the left faceoff circle. It came against former Capitals teammate and countryman Semyon Varlamov, his supporting actor in the classic Russian spy “This is SportsCenter” ESPN commercial. 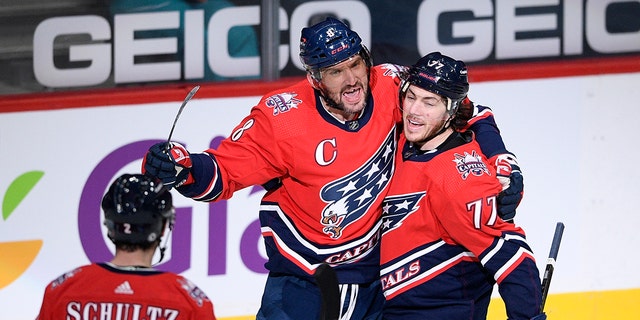 Washington Capitals left wing Alex Ovechkin (8) celebrates his goal with right wing T.J. Oshie (77) and defenseman Justin Schultz (2) during the second period of the team’s NHL hockey game against the New York Islanders, Tuesday, March 16, 2021, in Washington. This was Ovechkin’s 718th career NHL goal to put him at sixth place on the career list. (Associated Press)

“You are a fantastic hockey player,” Esposito said in a video message congratulating Ovechkin for passing him. “I don’t know how you score all those goals with the way these guys block shots with the great equipment that they wear. Good luck. Keep it going, but not against the Lightning.”

Fortunately for Esposito — who does radio for Tampa Bay — the Capitals don’t play the Lightning this season because of all divisional play. The next time Washington and Tampa Bay could face off is the third round of the playoffs.

That just means Ovechkin will continue tormenting the rest of the East Division. With Ovechkin leading the way, the Capitals handed the Islanders their first loss since. Feb. 27 and first in regulation since Feb. 20.

Ovechkin didn’t just score himself. He made a perfect pass to spring Evgeny Kuznetsov into the offensive zone and picked up the secondary assist when T.J. Oshie picked up the rebound and scored.

That was Ovechkin’s 1,300th career point, making him the 35th player in history to reach that milestone. Greybeard Joe Thornton is the only other active player on that list at 1,521.

With his 1,301st point on the power-play goal — his 264th, third all-time — Ovechkin also passed recently elected Hockey Hall of Famer Jarome Iginla for 33rd on the career scoring list.