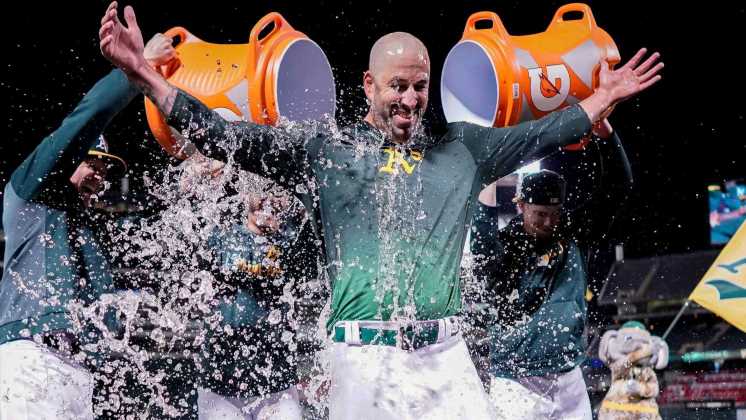 OAKLAND — It was nearly midnight and Oakland Athletics pitcher Mike Fiers sat behind the dais, trying to somehow explain what happened Tuesday night. He found himself struggling with his emotions.

This made no sense.

No darn sense at all.

The game was 15 minutes from not even being played because of a malfunctioning light bank in left field.

Fiers wasn’t even originally supposed to pitch, but the A's shuffled the rotation on their off-day.

Fiers entered with a 6.81 ERA, but here he was trying to explain how he just threw a no-hitter against the Cincinnati Reds in Oakland’s 2-0 victory at the Oakland Coliseum, the first of the major-league season, and the 300th in major-league history.

Athletics catcher Josh Phegley said he knew it was going to be a bizarre day the moment he walked into the clubhouse.

“I saw Mario and Luigi when I walked in," he said. “I saw the light tower not working. Mike throws a no-hitter. And I got covered with steak seasoning."

Yep, a weird day starting with Athletics slugger Khris Davis buying all of his teammates Nintendo Switches in celebration of his recent two-year, $33.75 million contract. He brought in a couple of guys dressed as Mario and Luigi to hand them out before the A’s got ready for the game, only to wonder if there would be one.

The left-field bank of lights were mostly out. Each team's manager and general manager met at home plate with the umpire crew, with Major League Baseball officials on stand-by, debating whether the game should be played.

“We wanted to make sure the other team would be ok with it," Athletics manager Bob Melvin said. “Major League Baseball didn’t want to start after 9 p.m."

The game started 1 hour, 38 minutes late at 8:45 p.m., and 2 hours and 25 minutes later, Fiers was being mobbed on the field after striking out Eugenio Suarez on a 75-mph curveball. He became the 35th pitcher in baseball history, and only the fifth active pitcher, to throw multiple no-hitters, with his first in 2015 pitching for the Houston Astros against the Los Angeles Dodgers.

"It’s pretty cool," said Fiers, who has a career 57-58 record and 4.11 ERA, pitching for his fourth team in five years. “I saw a little bit of the list. I’m just grateful to be here and get the opportunity to play.

“I remember when I was drafted, I wasn’t too high on the charts. I was a guy throwing 88 to 90 (mph), down in South Florida. I’m one in a million down there.

“You almost get emotional, man. I could be working 9-to-5. I could be doing so many other things. And just playing this game I love.

Fiers had third-highest ERA among American League pitchers entering the game, with an 0-2 record and 9.41 ERA and .358 batting average against in his last five starts.

But on this cool evening, he looked like Greg Maddux. He was carving up the Reds, mixing in his 88-90-mph fastball with pinpoint control, to go along with his changeup, slider and curveball. He struck out six batters and walked two in his 131-pitch gem.

Really, it was his pitch count that looked like it may be his biggest obstacle. He had 109 pitches after the seventh inning, and Melvin told Fiers that if he permitted anyone reached base, he was coming out of the game.

“I broke every rule in the book," Melvin said. “It was no fun for me once he got past 120 pitches, I promise you that, but he deserved it.’’

The biggest break for Fiers, Melvin said, was when second baseman Jurickson Profar hit a two-out homer in the bottom of the seventh Melvin had the bullpen warming up the entire time in the final two innings.

Perhaps the most nerve-wracking moment came with one out in the ninth when Joey Votto worked the count to 3 balls and 1 strike. Fiers came back with a changeup, and Votto grounded to first base.

“That’s the first time I realized he had a no-hitter," Athletics center fielder Ramon Laureano said. “Really, I didn’t know."

Well, if not for Laureano’s brilliant catch in the sixth inning that robbed Votto of a home run, Fiers would have been only a footnote.

Votto hit a towering fly ball to center field in the sixth inning when Laureano raced back to the fence, leaped, and snared the ball just as it appeared it might clear the fence.

“I don’t give credit to myself," said Laureano, who spoke at length before the game with Hall of Famer Rickey Henderson on playing defense. “He was the story."

There was also Profar’s play with one out in the sixth inning on Kyle Farmer’s shallow fly ball in right field, only for Profar to make a diving catch.

“Those usually fall in," Farmer said, “but I think the stars aligned tonight. Once we saw those two plays happening, we said this might be his night."

Fiers also benefited from a close scoring call in the fourth inning when Jesse Winker hit a ball up that middle that bounced off A's third baseman Matt Chapman’s glove. No announcement was made for nearly 20 seconds before it was ruled an error.

“It was way more nerve-wracking then when I was doing it," said Sean Manea, who had thrown the A's last no-hitter in 2018 and doused Fiers with Gatorade. “I was shaking on the bench. I don’t know, it was crazy seeing him do it.’’

And for the paltry crowd (announced at 11,794) that stayed after the lengthy delay, with perhaps less than half remaining, they were treated to history.

It was only the 13th no-hitter since the Athletics moved to Oakland.

“Amazing, that’s all I can really say,’’ said Fiers. “A bunch of stuff just happened."

On a night when he wondered if the game would even be played.

“I was worried there,’’ Fiers said. “I’m just glad we got those lights working."