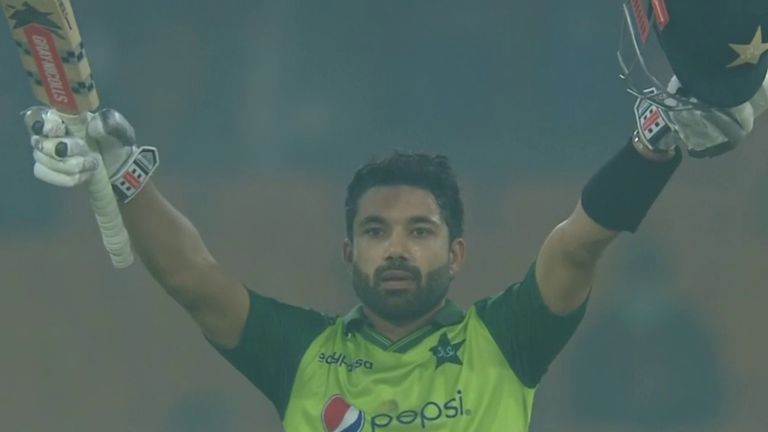 Mohammad Rizwan struck his maiden IT20 century to pave the way for Pakistan’s tense three-run win over South Africa in the series opener in Lahore.

Rizwan became only the second Pakistan player to register three figures in the shortest format of the game, behind Ahmed Shehzad who scored 111 against Bangladesh in 2014 in Mirpur, reaching the landmark off 63 balls with seven sixes and six fours.

South Africa mounted a strong chase on the back of 54 from Reeza Hendricks but the opener was denied the chance to see his side across the line when wicketkeeper Rizwan collected a loose ball and broke the stumps with Hendricks short of his ground.

Is this the game right here? 🤔

Earlier, Rizwan took up the mantle for Pakistan after his opening partner Babar Azam was run out for a duck by a direct hit from Bjorn Fortuin, the bowler dashing after the ball off his own bowling and throwing down the stumps one-handed as he slid across the turf.

Targeting the leg-side, the opener posted his 50 off 35 balls before accelerating towards a second international hundred in as many innings after chalking up his first Test ton in Pakistan’s 95-run win over the Proteas in the second Test in Rawalpindi.

South Africa chipped away at the other end with Andile Phehlukwayo picking up 2-33 but Rizwan remained firm, bringing up his century with a magnificent six.

💯 for Rizwan – and he gets there with a magnificent 6⃣!

The tourists’ chase began strongly as Janneman Malan (44 off 29) dominated a first-wicket stand of 53 with Hendricks before losing his off-stump to an Usman Qadir (2-20) beauty.

Debutant Jacques Snyman (two) and David Miller (six) departed in quick succession to leave the Proteas on 83-3 and Pakistan further tightened the screw with the wicket of Heinrich Klaasen, caught off Haris Rauf (2-44) at deep square as he looked to clear the rope.

Hendricks brought up his fifty off 38 balls and with 37 runs needed off three overs the game remained very much in the balance only for Rizwan to intervene again, this time running out Hendricks as he dallied over whether or not to sneak a quick single.

The match still went down to the last ball thanks to some late hitting from Dwaine Pretorius (15no) and Fortuin (17no) but with six needed off the final delivery, Faheem Ashraf conceded just a couple to see Pakistan home.

Watch the second T20 between Pakistan and South Africa live on Sky Sports Cricket from 12.50pm on Saturday.