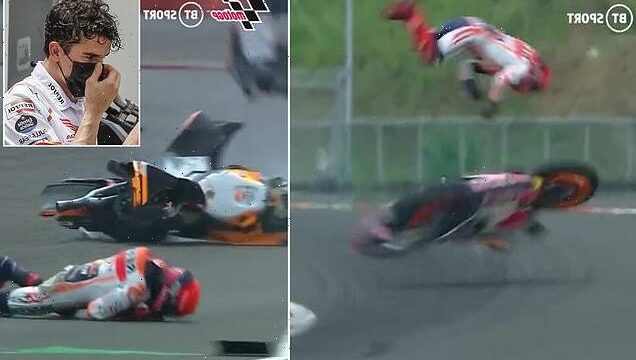 MotoGP star Marc Marquez walks away from SHOCKING 115mph crash as he is thrown over his bike, flips while 15 feet high in the air, lands heavily and rolls on the track… but escapes with only a concussion

The eight-time world champion was taken to hospital and suffered a concussion after a violent high-side during the 20-minute session at around 115mph.

Marquez was launched from his Honda through the Turn 7 right-hander in the closing moments of the session at the Mandalika International Street Circuit.

Both the rider and bike were sent flying through the air, with the Spaniard somersaulting over his machine before landing heavily on his arm.

Marquez was up to 15 feet in the air when he somersaulted before crashing onto the track.

The force of the crash sent him sliding and rolling across the track before eventually coming to a stop. 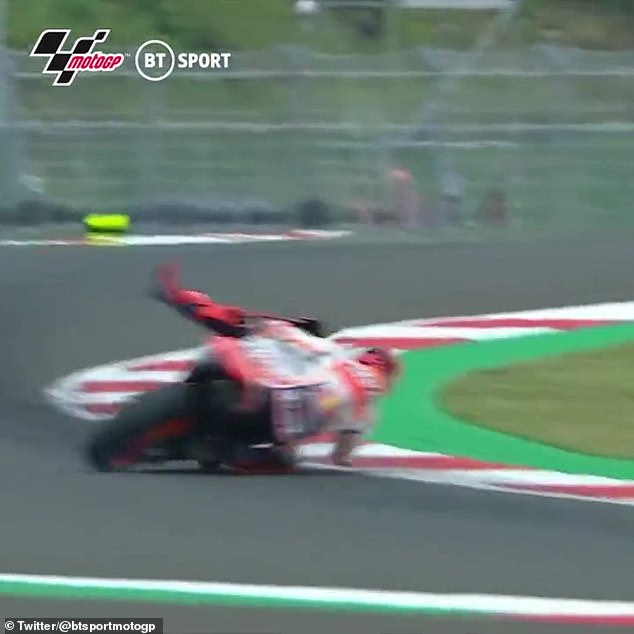 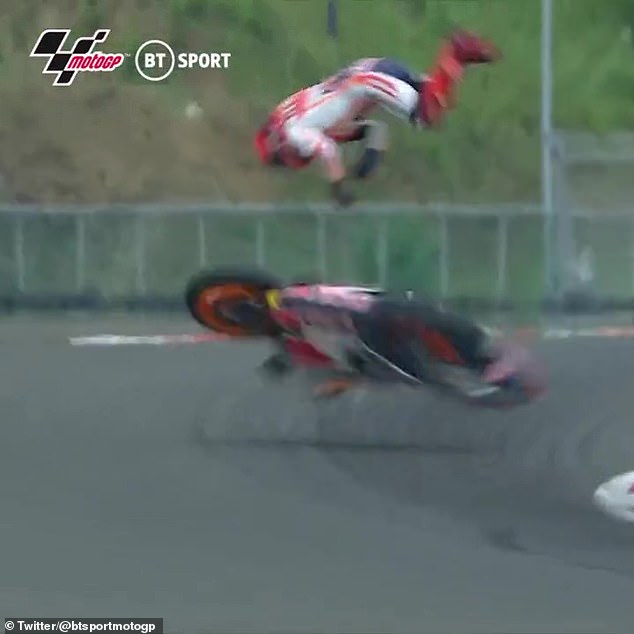 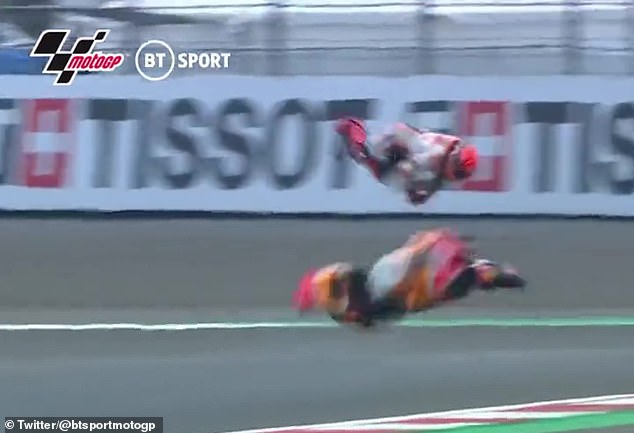 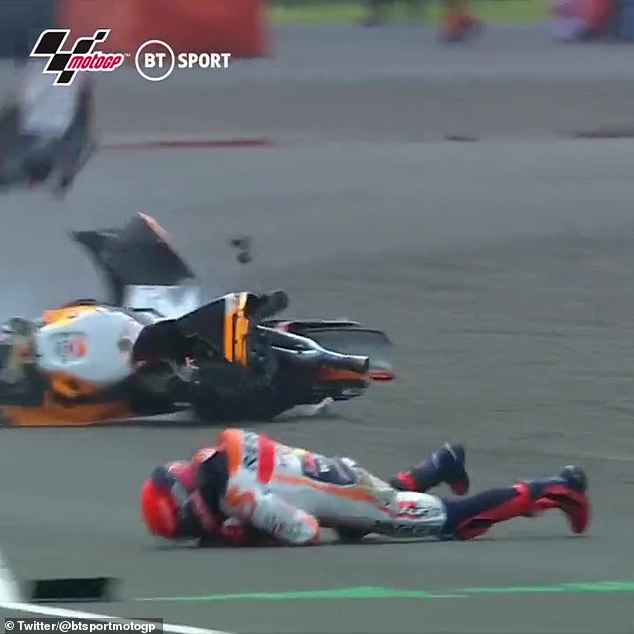 BT Sport commentator Gavin Emmett said on commentary after replays were shown: ‘That’s a shocking crash for Marc Marquez. That’s one of the biggest high-sides I’ve seen in 25 years covering this sport.

His bike was destroyed and his mechanics had their hands covering their mouths as they gasped in shock at the violence of the crash.

Miraculously, he was able to get to his feet, albeit gingerly, and he stumbled away looking unsettled and dazed.

He was eventually met by medical personnel who drove him back to the paddock before he was taken to hospital. 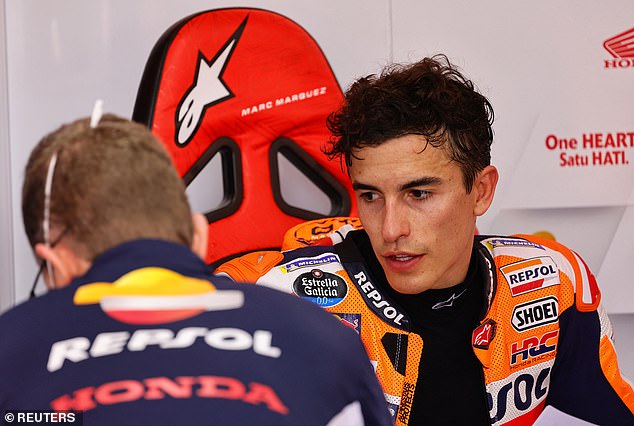 He was taken to hospital for checks and MotoGP’s official website confirmed he had been declared medically unfit for the race after suffering a concussion.

Doctor Angel Charte said: ‘Marc is fine. He had a high energy crash in the warm up, which resulted in a head injury. Initially, we examined him here and then referred him to the hospital in Lombok.

‘He underwent several radiological tests, which were negative. In agreement with the rider and the team, and due to the fact that this type of pathology requires a period of observation between 12 and 24 hours, the rider, the team and the MotoGP medical staff have decided to declare him as unfit.’ 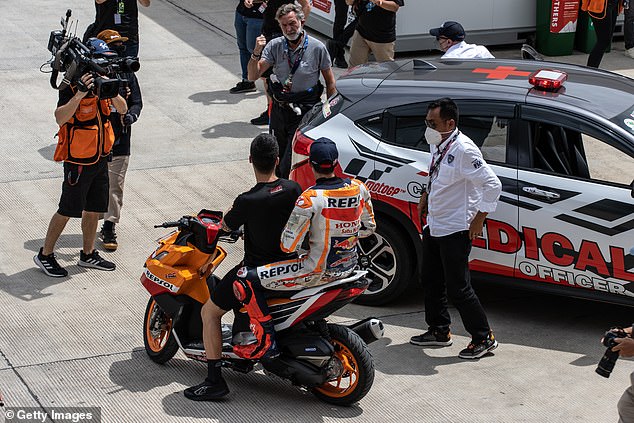 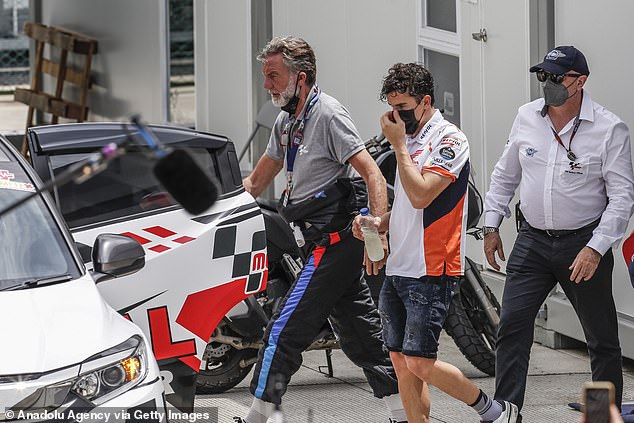 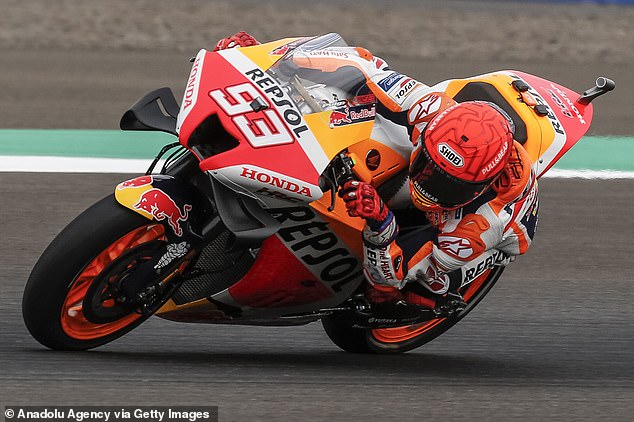 Marquez has endured a bruising weekend in Indonesia, suffering two front-end crashes during qualifying as he tried to get out of the Q1 session.

Due to the extreme temperatures at Mandalika, Michelin has brought a stiffer tyre casing last used in 2018 to try to cope with the conditions after it encountered problems in the pre-season test in Indonesia on its 2022 tyre design.

However, the stiffer casing has caused major rear grip issues for a number of riders.

The lack of rear grip for the Honda has been evident throughout the Indonesia weekend as Marquez suffered numerous rear-end moments through the sessions – including in warm-up before his massive crash.

Marquez, who has won the senior MotoGP world championship on six occasions, missed the majority of the 2020 season after breaking the humerus in his right arm after a nasty fall.