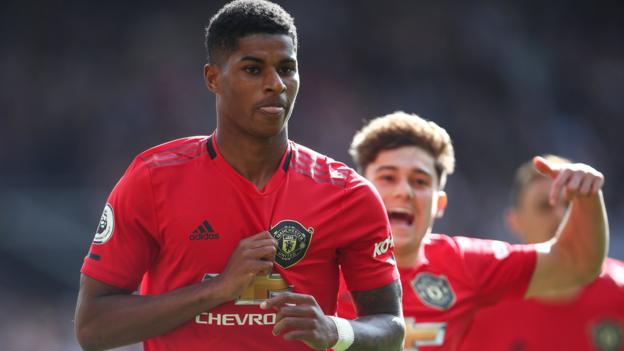 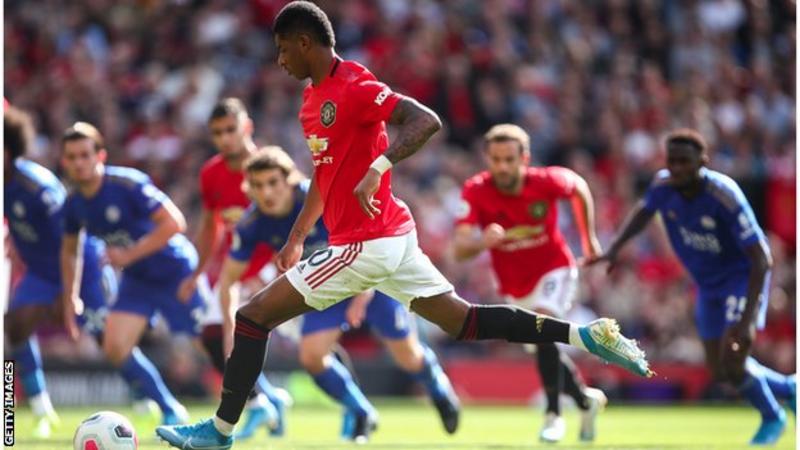 Manchester United returned to winning ways and ended Leicester’s unbeaten start to the season by edging to a Premier League victory in a pulsating contest at Old Trafford.

After thrashing Chelsea 4-0 on the opening day, United had failed to win any of their last three games but took all the points to inflict Leicester’s first defeat of the campaign.

Marcus Rashford scored the only goal from the penalty spot in the eighth minute after being tripped by Leicester defender Caglar Soyuncu.

Rashford could have got another in the second half, but his wonderful free-kick from 30 yards curled over the wall and onto the angle of crossbar and post.

Defender Harry Maguire, given a torrid reception by the Leicester supporters, came close to scoring against his old side but headed straight at Kasper Schmeichel.

The result means United leapfrog their opponents into fourth place, while Leicester drop down to fifth.

United came into the game on the back of 1-1 draws at Wolves and Southampton, as well as a home loss against Crystal Palace but boss Ole Gunnar Solskjaer had spoken beforehand about his side performing well without the positive results.

They managed to hold on to victory, which was just their second in their previous 10 league games.

England international Maguire became the world’s most expensive defender when he joined the Red Devils from Leicester for £80m in the summer and played his part as his side kept only their second clean sheet in the last 15.

Jeered by the travelling fans throughout, Maguire would have silenced those taunting him, but saw his towering header from a corner collected by Schmeichel.

On one occasion, he showed good pace to keep up with the fleet-footed Demarai Gray, dispossessing the winger before turning away with the ball, greeted by rapturous applause from the home supporters.

With the Leicester fans singing “we don’t need you, we’ve got Soyuncu” from the first whistle, the Turkish defender fouled Rashford right on cue inside the box, allowing the England forward to send Kasper Schmeichel the wrong way from the penalty spot.

Out-of-favour Nemanja Matic had a decent showing in his first start of the season – in place of the injured Paul Pogba – attempting 41 passes, the most of any home player, while the industrious Scott McTominay had two interceptions and won the ball back seven times.

Andreas Pereira’s free-kick in the opening minute, whipped towards the top corner, was brilliantly pushed away by Schmeichel, watched on by his father Peter, and Daniel James came close to equalling his manager Solskjaer’s record from 1996.

The Welshman was looking to score in his first three Premier League games at Old Trafford with – what is turning into – his trademark skill, cutting in from the left and arrowing a right-footed strike narrowly over.

Away day blues for Leicester

Leicester began the day in third place, harbouring hopes of breaking into the top six for the first time since their league-winning campaign in 2016.

But Brendan Rodgers’ side have work to do as they continued their horrific run against United, now losing 18 times against them – more than any other opponent.

Their frailties lie at the back away from home, failing to keep a clean sheet in their last 11 games on the road and it was a defensive error which cost them this time.

Soyuncu has started the season in impressive fashion but was given a difficult afternoon by Rashford, sticking out a foot to trip the United forward in conceding the penalty and fouling the Englishman on three occasions in the first half. He did improve as the game wore on, winning the ball back a total of nine times.

Leicester could have taken the lead when a long ball from Schmeichel bounced all the way through to Maddison, whose low shot was saved by David de Gea and the England midfielder also curled a free-kick agonisingly wide. 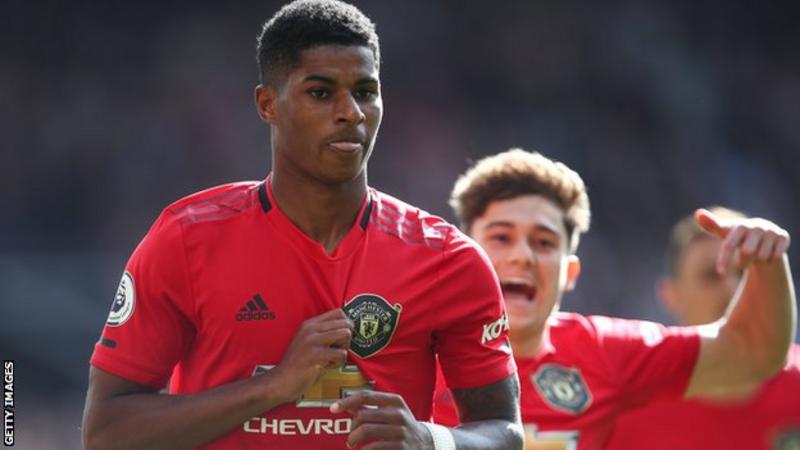 Ben Chilwell (Leicester City) wins a free kick in the defensive half.

Attempt missed. Wilfred Ndidi (Leicester City) left footed shot from the centre of the box is close, but misses to the right.

Jonny Evans (Leicester City) wins a free kick in the defensive half.

Daniel James (Manchester United) is shown the yellow card for a bad foul.

James Maddison (Leicester City) wins a free kick in the attacking half.

Marcus Rashford (Manchester United) hits the bar with a right footed shot from outside the box from a direct free kick.

Scott McTominay (Manchester United) wins a free kick in the attacking half.

James Maddison (Leicester City) is shown the yellow card for a bad foul.

Scott McTominay (Manchester United) wins a free kick in the defensive half.

Ashley Young (Manchester United) wins a free kick in the defensive half.

Attempt missed. Daniel James (Manchester United) left footed shot from outside the box is too high. Assisted by Andreas Pereira.

James Maddison (Leicester City) wins a free kick in the defensive half.

David de Gea (Manchester United) wins a free kick in the defensive half.

David de Gea (Manchester United) wins a free kick in the defensive half.

Attempt missed. Youri Tielemans (Leicester City) right footed shot from outside the box is high and wide to the left. Assisted by Demarai Gray.