Magpies Netball coach Rob Wright is seeking ‘‘a big response’’ to Sunday’s eight-goal loss to the Giants in which no player was judged to have won their position and key internal performance measures added up to a collective team rating of just 2.5 out of seven.

That compared unfavourably with the 3.75 for the opening round defeat of the Sunshine Coast Lightning and the 4.25 for Collingwood’s subsequent draw against the Queensland Firebirds.

While the Magpies are fourth on the ladder with 12 points heading into Friday night’s clash against the injury-hit Adelaide Thunderbirds at Melbourne Arena, the key number from round three for Wright was the amount of turnovers: 36. 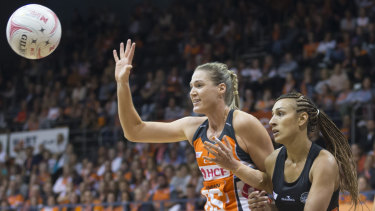 Caitlin Bassett takes the lead over Magpie Geva Mentor in the Giants eight-point Super Netball win on the weekend.Credit:AAP

Labelling the performance the ‘‘worst game of our campaign, including pre-season’’, the Pies’ new coach nevertheless welcomed the five-day turnaround.

‘‘It’s a blessing, because we haven’t swept it under the carpet, we’ve already addressed that stuff, but we want to move on quickly, and we want to see some change in what we did.

‘‘We just need to tweak a few things around our attack, so that’s probably our focus, because we haven’t quite got that right, structurally. Then again we can’t turn over that much ball and expect to beat anybody – it’s much higher than I would ever expect or accept.

‘‘But we haven’t thrown anything out, we’re literally just tweaking it, and I think if we can get it right then hopefully we’ll see a dramatic improvement.’’

Wright said he wanted to see goal attack Nat Medhurst and centre Kim Ravaillion ‘‘impose themselves on the game more’’ to help share the offensive load being borne by shooter Simona Nelson and wing Kelsey Browne, but also accepted blame for some indecision and lack of clarity in his own messaging against the Giants.

"I thought especially in the third quarter I was rubbish,’’ Wright admitted, with refreshing candour. ‘‘I was just not very clear and so I don’t think the players went back going, ‘Oh, we’re really set on that’.

‘‘So I take responsibility for that because that’s my job, and I can’t expect them to be clear if I haven’t been clear in the first place, so that’s a good learning for me.’’

Wright also backed the introduction of a formal match review system after the disciplinary procedures currently in place required the Magpies to file a report over the round three clash in which Medhurst was hit in the face by Tara Hinchliffe’s elbow.

Wright said he was a ‘‘massive fan’’ of a weekly review system similar to those used by the AFL and NRL, given the increasingly physical nature of Super Netball.

‘‘In the world’s best domestic competition I don’t really think it should be up to teams to be having to put in reports about other teams.’’