KHABIB NURMAGOMEDOV has so-far proved to be the unstoppable champion reigning the UFC’s lightweight division. 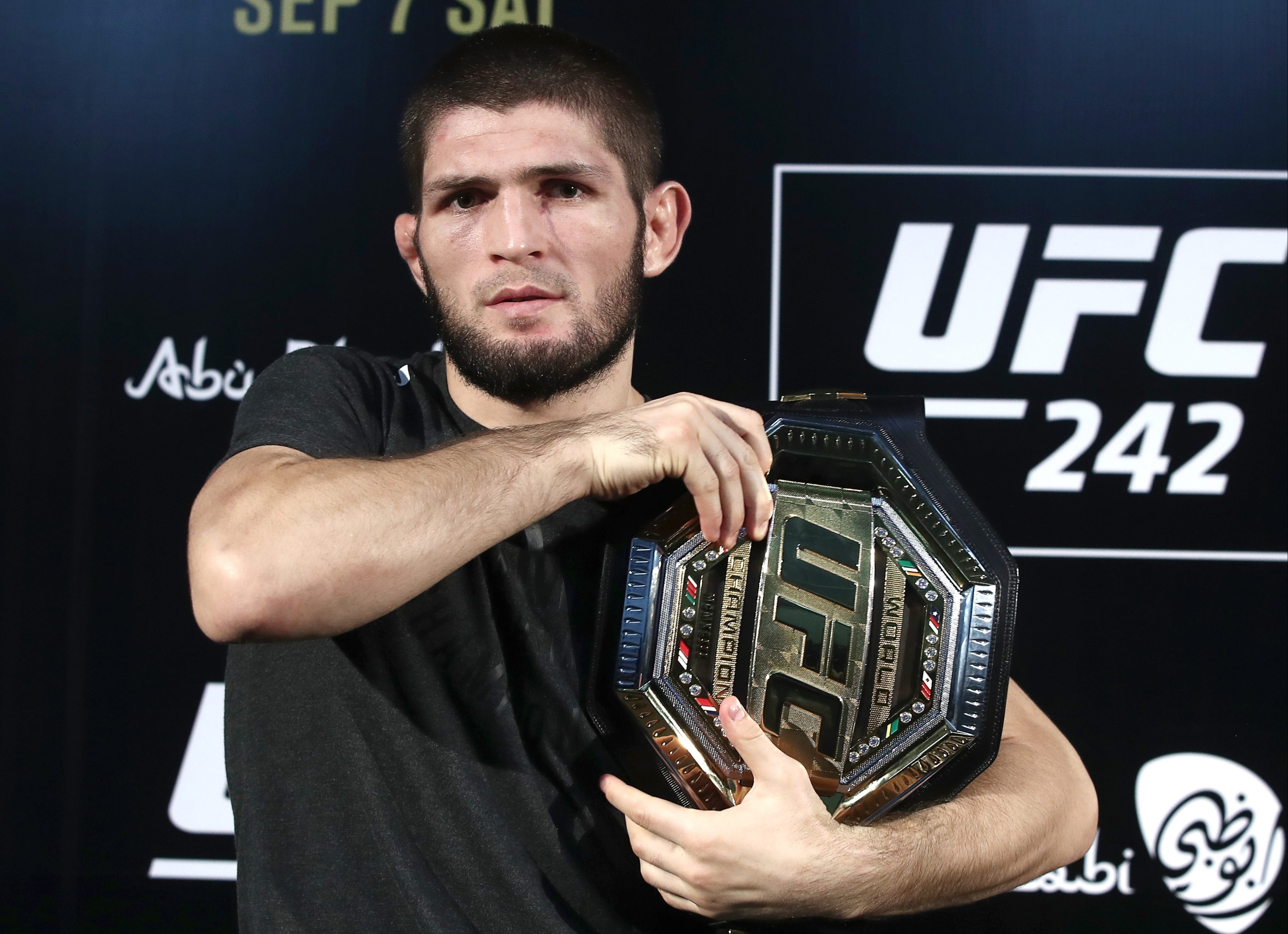 The Russian is so dominant, he only lost his first ever round in the octagon in 2018, against Conor McGregor.

But despite his seemingly unblemished career, Nurmagomedov, 32, has had to endure rare and brief moments of threat in the cage.

In Nurmagomedov's last fight, back in the Middle East, he submitted ex-interim champion Poirier in round three.

But just minutes before, he looked moments away from defeat as Poirier himself locked in a guillotine choke.

Nurmagomedov desperately fought off the American as his adoring fans were left with their hearts in their mouth.

Amazingly, the Dagestani hero escaped and reversed take Poirier's back and force the submission.

It capped off two thrilling minutes and provided Nurmagomedov with the greatest adversity of his championship run. 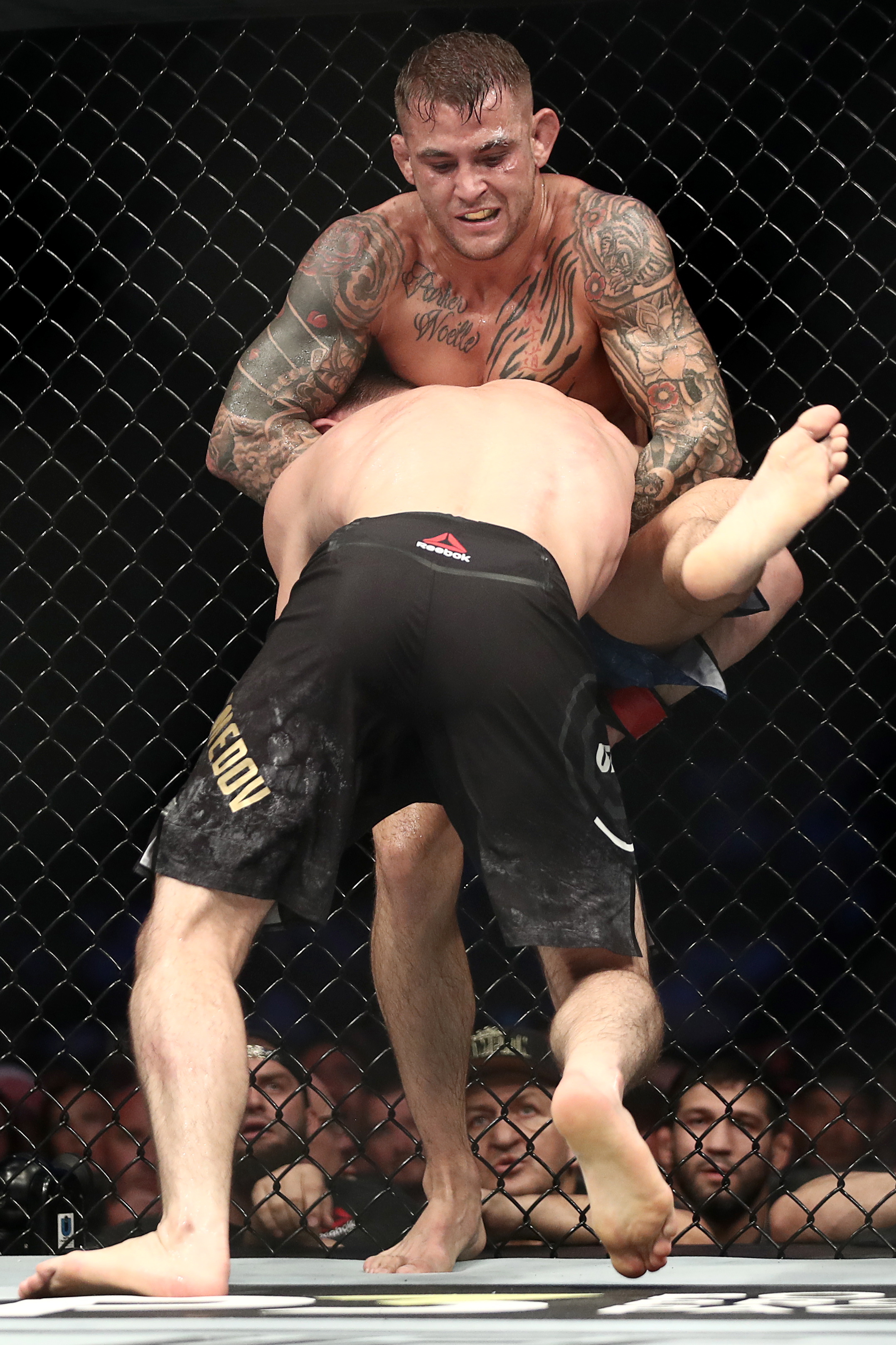 McGregor and Nurmagomedov sold a UFC record 2.4million pay-per-views in 2018.

And it proved to be a classic matchup between striker and grappler, despite Khabib flooring the Irishman with a right hand in the second.

The following round Nurmagomedov shocked all as he decided to stand and trade with McGregor, going toe-to-toe with his rival.

It was the only session he lost, and in the fourth he would revert back to grappling, before choking The Notorious out.

Despite his dominance, McGregor was able to defend four of Khabib's seven takedowns and landed 51 of 81 significant strikes.

Nurmagomedov's trainer Javier Mendez credited McGregor as their toughest challenge to date, leaving the door open for a rematch. 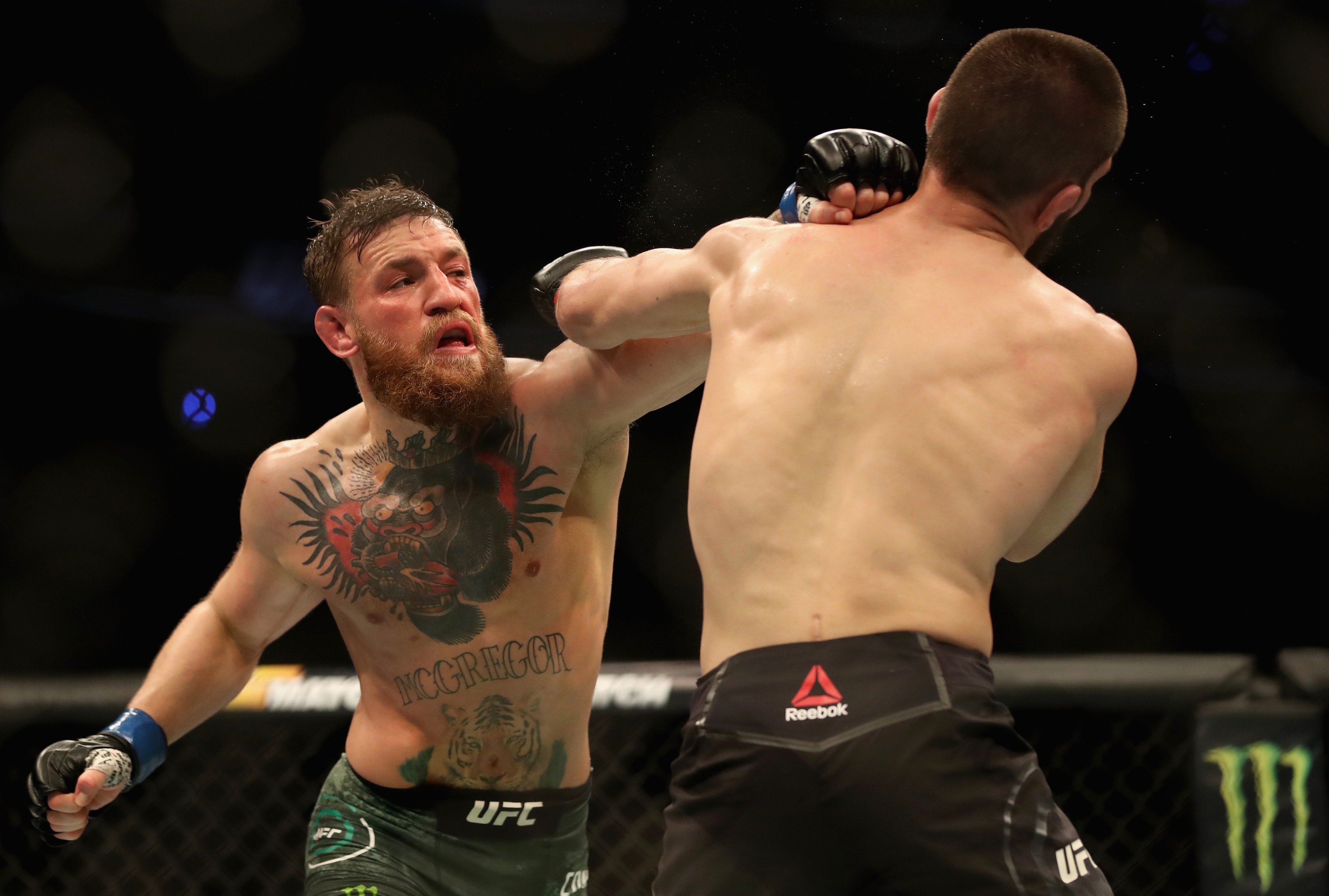 In only Khabib's second UFC fight, he took on Tibau, who was making his 16th appearance in the octagon.

Nurmagomedov won all three rounds on every judges card, but failed to land a single takedown in the fight.

It was the only time Khabib was taken the distance without taking his opponent down.

Tibau even took the feared grappler down and did land more strikes during the fight.

But Nurmagomedov was rewarded for his pressure and octagon control, despite being statistically bettered on the floor and feet. 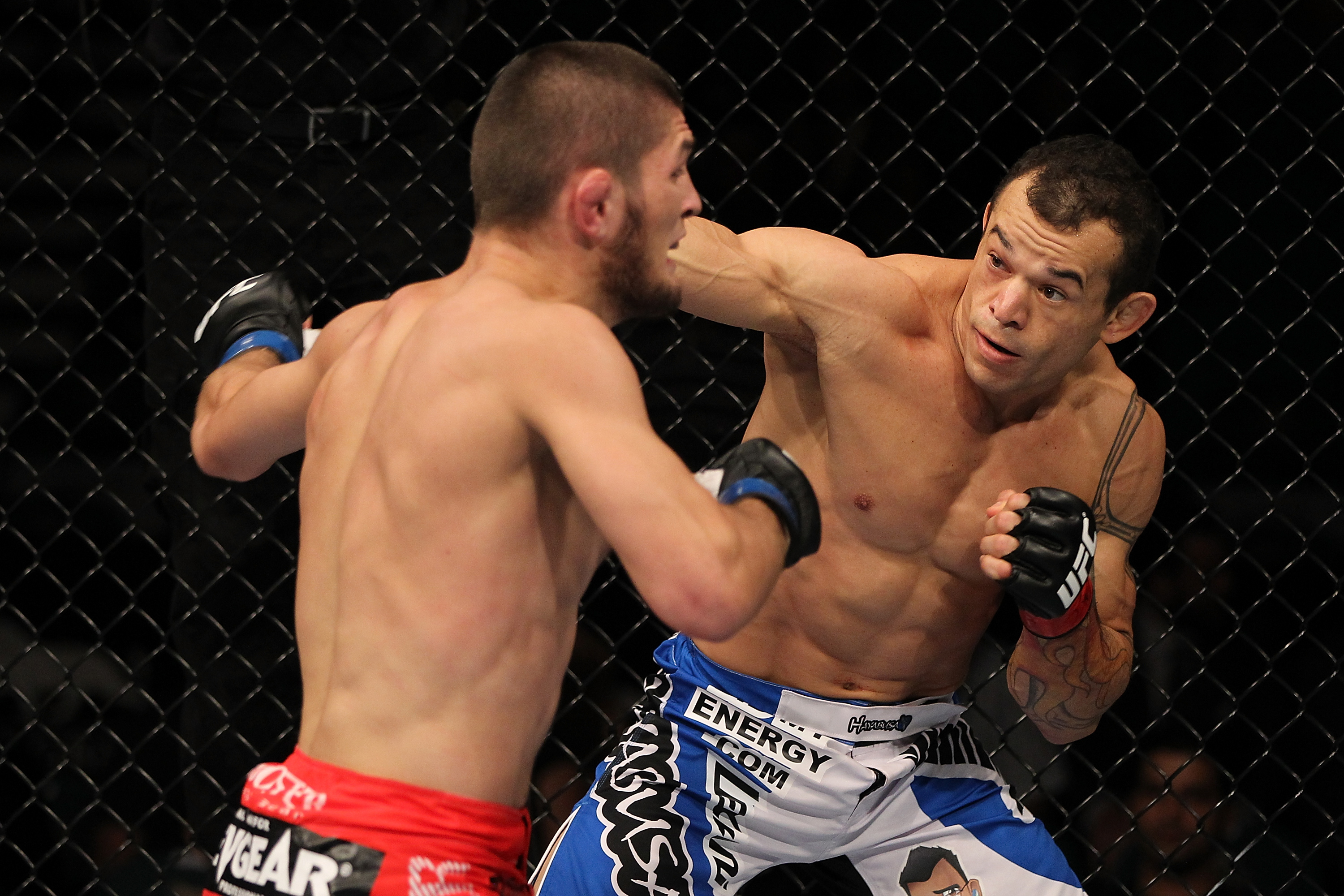 On the night McGregor beat Eddie Alvarez to win the lightweight belt – becoming the first to hold two titles at the same time – Khabib was also victorious.

He dominated southpaw Johnson over three rounds, winning by arm bar in the final two minutes.

But in round one, Johnson caught Nurmagomedov with a flush left hand and forced him to back up.

The American was unable to follow up after momentarily stunning Khabib – who would go on to talk to Dana White WHILE punching Johnson in the fight.

Nurmagomedov was clinical throughout the rest of the bout, and proved he could take a shot clean on the chin, having recovered seconds after. 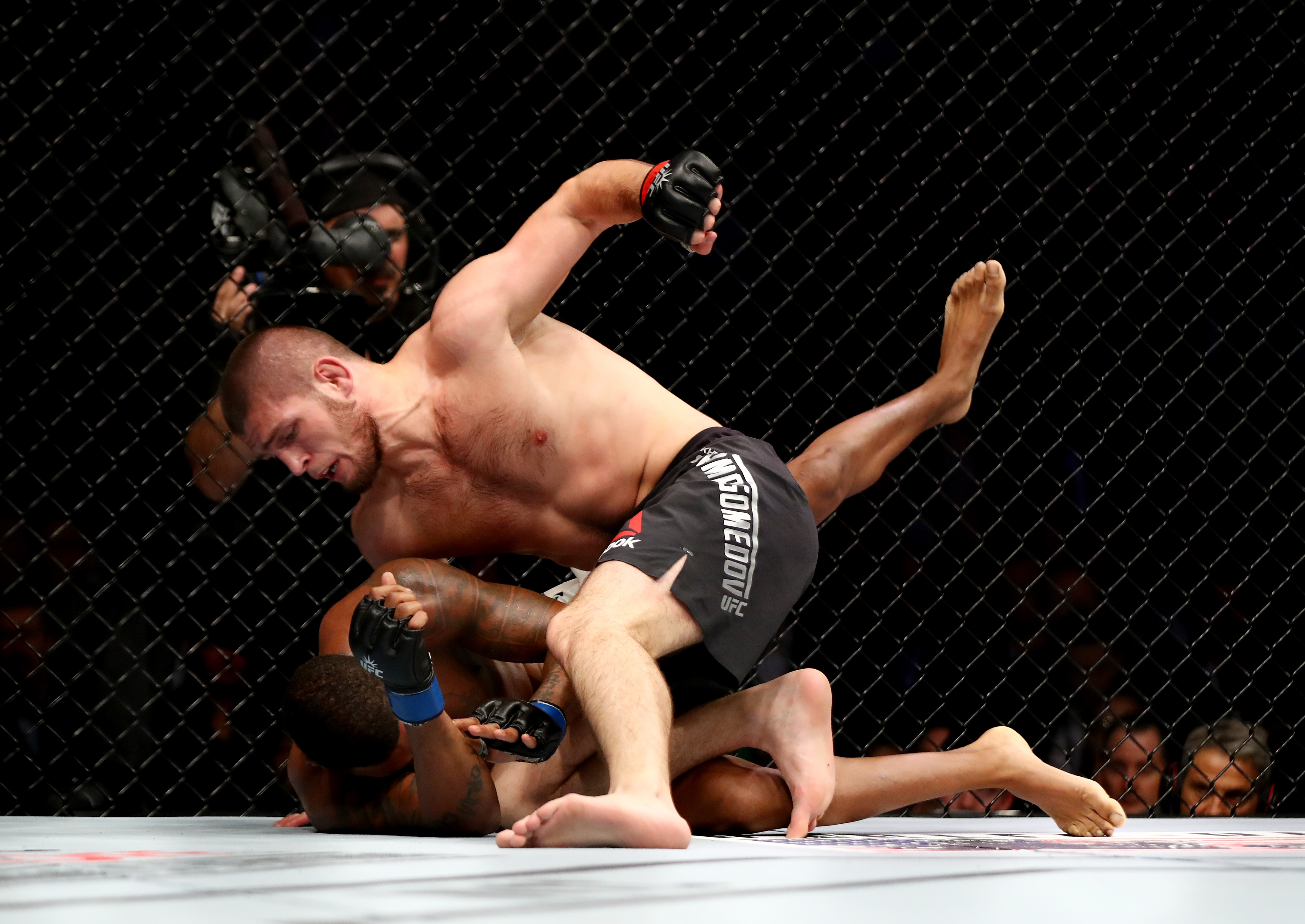 Iaquinta was a late replacement to face Khabib, after Tony Ferguson and Max Holloway pulled out on the week of the fight.

Khabib would comfortably win all five rounds, but was given a much tougher challenge than expected.

Iaquinta was able to prevent nine of Nurmagomedov's 15 takedown attempts and landed 41 strikes.

During the latter stages of the fight, Khabib began to strike more, showing off an impressive jab, and seemed content to go points.

Iaquinta was left with a battered face and trounced on the scorecards, but his durability was praised as Nurmagomedov slowed down towards the end. 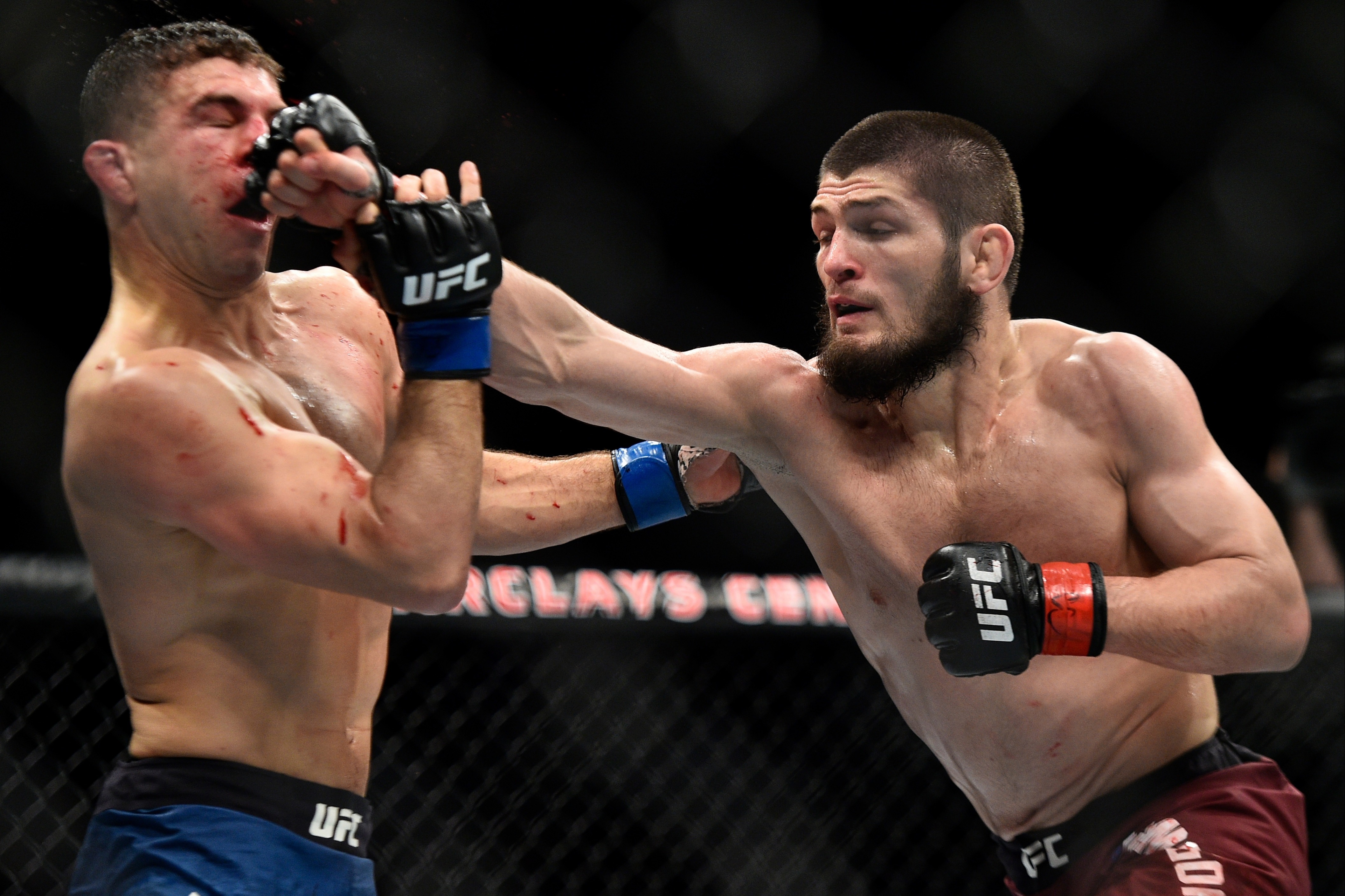