Our quick guide to how karate works in the Olympics – and who to watch out for.

Some 50 million people practise karate around the globe but the history of the martial art is inextricably linked with Japan. Hailing from the southern island of Okinawa in the 17th century, it wasn’t formally recognised by the Japanese Martial Arts Committee until 1933. By then, Japan’s father of modern karate, Gichin Funakoshi (1868-1957), was giving public displays in Tokyo.

After World War II, US soldiers returning home from Okinawa took with them a passion for karate. It went global. When it was announced in 2016 that karate was going to the Tokyo Olympics, World Karate Federation president Antonio Espinos said, “This will be a fiesta for the entire karate world”. 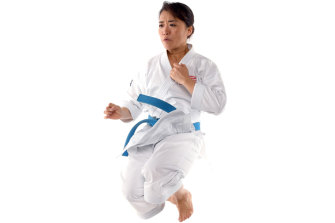 Karate differs from other popular martial arts in that, for example, it generally has less kicking than taekwondo, less grappling than jiu jitsu and more quickness and precision than muay thai, which places a greater emphasis on power of impact. In Tokyo, there are two karate events, Kata and Kumite. Kumite, which translates to “grappling hands,” is combative – expect punches, elbows, kicks and some grappling. Kata is more style-oriented, an individual event that translates to “form”.

Sixty athletes will compete in Kumite, 20 in Kata, with an even split of men and women. One gold each for men and women is up for grabs in Kata and six in total in Kumite: weight divisions are 67, 75 and over 75 kilograms for men and 55, 61 and over 61 kilos for women.

What is karate doing in the Olympics?

Karate was Japan’s pick, just for its Games; other new sports for these Games – skateboarding, sport climbing, surfing and three-on-three basketball – will also be staged in Paris in 2024 (along with breakdancing, France’s pick), part of a push to appeal to younger audiences.

Softball and baseball are back again, too, having featured at Olympics before. Baseball had an unofficial debut at the Missouri Olympics in 1904 and was part of the program from 1992’s games in Barcelona until London in 2012. Softball didn’t come on the scene until the 1996 Atlanta Olympics and was played until 2008’s games in China. The two sports are the only ones in the Olympics that have only men (baseball) and only women (softball).

The karate will be staged at the Nippon Budokan Hall, a temple-shaped stadium built to host judo at Tokyo’s 1964 Olympics, and the venue for Muhammad Ali’s mixed-martial-arts stoush with Antonio Inoki in 1967 (as well as concerts by the likes of ABBA and Bob Dylan). 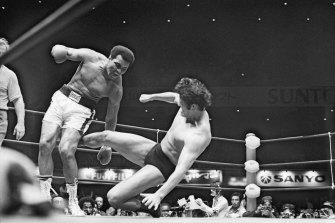 Antonio Inoki and Muhummad Ali fought in the stadium that will host karate in Tokyo.Credit:Getty Images

How do you win gold?

The Kata event is equal parts grace, a show of incredible strength and balance, and intimidating, as you can see below in this fierce yet flowing demonstration from Spaniard Damian Quintero. Athletes perform a series of moves for between two and three minutes and are judged on stances, techniques, timing, breathing, transitional movement and so on. Seven judges each award a score between five and 10. The two highest and two lowest scores are eliminated and the three in between are added up to make an athlete’s final score.

Kumite is about sparring: two athletes, an eight-metre by eight-metre area and three minutes, tops, in which karateka kick, punch and strike opponents on the head, neck, back and belly. Above, you see Eygpt’s Giana Lotfy in action against France’s Lucie Ignace in the 2016 world championships; then notice how Azerbaijan’s Rafael Aghayev appears to be on the back foot until he puts Luigi Busa of Italy on the mat in the World Combat Games in 2013.

The object of the Kumite event is, basically, to either land a blow on your opponent’s body or swiftly sweep or throw them to the floor. Competitors win by opening up an eight-point lead or being in front on points at the end of the three minutes. If it is a tie, whoever scored first wins. A nil-nil draw is decided by judges.

Who’s the best at it?

Apart from Japan, a surprising array of nations are handy on the mat: Turkey, Kazakhstan, Italy and Iran are some of the strongest karate countries across both men’s and women’s events. Of those going to Tokyo, Rafael Aghayev is considered one of the best of all time. A national hero in Azerbaijan, he has won five Kumite world championships and 11 European championships along with 14 silver and bronze medals at the two events.

Japan’s best medal hopes are Ryo Kiyuna, above, who said in early 2020 that he would train every single day of the year to realise his golden dreams for Tokyo, and Miho Miyahara, who wants not only to win but entertain with her “offensive moves to give the spectators some excitement”. Turkish stars include Serap Ozcelik, who teaches phys ed in a primary school Istanbul, and Eray Samdan.

Are we any good at it?

Australia has just one Tokyo-bound competitor: Tsuneari Yahiro, above, will compete in the men’s 75-kilogram Kumite class. Yahiro was born in Japan, moved to Sydney with his family when he was 18 months old, and took up karate as a child. Now 34, he will retire after the Olympics. “For us karatekas to be able to come back to Japan where karate started and showcase our skills is amazing,” Yahiro says. “Fighting in Japan for my first Olympic Games feels like it’s destiny. It was a goal I set five years ago [and] now I’ve actually achieved it.” Ranked 40th in the world in his weight division, a medal would be an incredible result.

More quick guides to the other new Olympic sports …