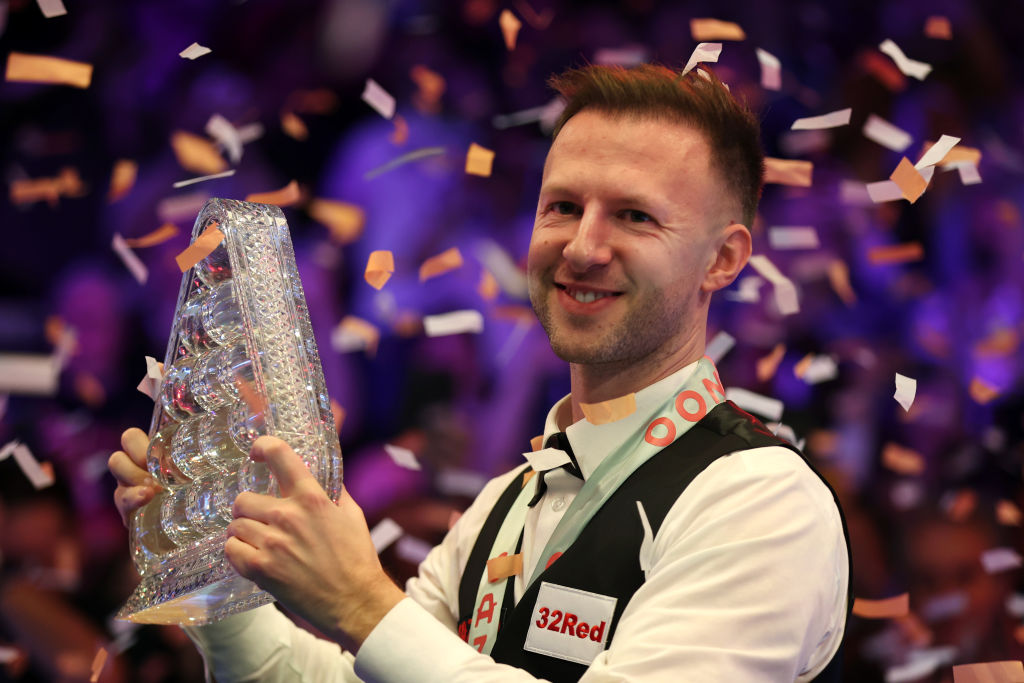 As Judd Trump scrapped, fought and battled his way to a second Masters title on Sunday night, he displayed a side to him that once seemed unthinkable, a side he described as ‘put you to sleep snooker’.

Trump was rarely at his brilliant best all week in north London, digging in to come through deciding frame wins over Ryan Day and Barry Hawkins, before beating Stuart Bingham to set up a final with Mark Williams.

‘The way I played this week, not my best, but this is my best ever performance to grind out to win this.’

The 33-year-old is an awful long way from the youngster who burst into the big time in 2011, reaching the World Championship final and winning both the China Open and UK Championship.

It was that year that he declared: ‘I want to play naughty snooker. It’s a hard thing to describe and define.’

It seemed like a definition would include all-out-attack, with near constant fireworks, but the naughtiness didn’t quite bring the success that 2011 had suggested would follow. Trump picked up wins but it wasn’t until a few years later that he really started to fulfil his immense potential.

There were more trophies on the mantlepiece by the time he won the 2019 Masters but it was that 10-4 thrashing of Ronnie O’Sullivan in the final that pushed Trump into a spell as the best player on the planet.

‘Hopefully it’s a major turning point in my career,’ Trump said after downing the Rocket in 2019 at Alexandra Palace. ‘It’s easily the biggest event I’ve won now. Back then [in 2011] it was all-out-attack, but the way I played this week, I was pleased to come through against world class players.

‘I need a new word for it now. It’s granite snooker now, not naughty snooker.’

As naughty snooker was put to rest, Trump went on to win the World Championship in 2019 and then rack up ranking titles with ridiculous regularity, but over the last 18 months tournament wins have been harder to find.

The relentless good form was trickier to rustle up and the Bristolian was not enjoying himself nearly as much as he was when everything was coming so easily to him.

However, he has developed a taste for the battle, a sort of bloodlust on the baize, which started at the World Championship last year when he reached the final despite being largely below-par.

He didn’t quite get over the line at the Crucible but he did at Alexandra Palace last week and after entering the granite era in 2019, he has now found his third phase, and he doesn’t care how it might look.

‘It’s Cliff Thorburn snooker, Grinder snooker, put you to sleep snooker. If it means I win this tournament, I’ll always do this,’ he said after lifting the trophy at Alexandra Palace.

‘At the World Championship it was a big thing for me to get to the final the way I played. But to win, there’s a big difference between the final and winning. To feel like you were outplayed and feel like I was out of the tournament so many times, in my head I was preparing what I’d say if I lost.‘

Not only did Trump channel the Canadian legend Thorburn, but also felt he showed the hallmarks of a Mark Selby win, relying on a B Game that can compete with the elite when the best stuff is not available on tap.

‘I am proud, I’m super proud,’ said Trump on calling upon Selby-esque skills. ‘The way he’s able to stick in there, I’ve got a lot of admiration for.

‘He’s the player that over the last couple of years I’ve grown to admire what he did in his prime, and not in his prime he was still winning the World Championship. Just digging in, never falling more than one frame behind, I just put that down to trying to have the mindset and mentality as someone as good as him.

‘I think it is just about mentality. I was missing so many easy balls and normally that would really annoy me, get me down and carry on and carry on, but I was able to have a terrible frame and back it up with a break in the next frame. I was able to put up with it.’

Victory in this manner may not have been as spectacular as how he cut down O’Sullivan four years ago, but it means more to Trump as it comes after a spell of doubts and criticism.

Such was his dominance over 2019-20 that returning to winning a couple of titles a year rather than five or six has seemed underwhelming, as was not winning a Triple Crown title since that 2019 visit to the Crucible.

Critics circled, despite him clearly still being one of the very best in the world, and he is glad that he will keep a few people quiet, at least for a while.

‘This is definitely more special for me,’ said Trump on his ’23 Masters triumph compared to his first. ‘The first event I’ve won twice. It’s been a tough season or 18 months after winning so much. Even though I’ve still won a few events and been in the mix, it’s been so hard to come back down with everyone writing you off.

‘I’ve read a lot of stuff about my best days being behind me, so to do that not playing my best, similar to the Worlds, just digging in and beating somebody like Mark Williams is just incredible.

‘It doesn’t bother me as such, but obviously it would be nicer to put myself in a position where they can’t say that and they have to find something else, which they will do, but it is nice.

‘When you win a major, you feel like for two or three years you’re on a free roll. You want to win one every couple of years. When you go through a spell without winning it the pressure builds and builds. You want to keep ticking them off, it’s my aim that I can be a multiple winner of all three.

‘I always have to remember that I’m playing to my own pace and my own level. If I look around at people my own age I’m way ahead of them. It’s important to not get down on myself. I’d like to have won 20 majors already but it’s extremely tough. I do feel like there’s way more top players now, there’s 10 people that are really, really good. I feel like I’m going along at a nice pace, but hopefully I can keep winning.’

Known as the Ace in the Pack and the Juddernaut over his career so far, Trump suggested he was like a cat at the Masters last week, so could that be his new moniker?

‘The Cat? That’s kind of what happened this week,’ he said. ‘There’s definitely been a few lives lost, but hopefully this can put me back to the form, somewhere near where I was.

‘The confidence and the manner that I won I can take something into the tournament next week.’

After falling back into the pack over the last year, the cat-like display and a second Masters win could see the Ace turn back into the king of the jungle once again.