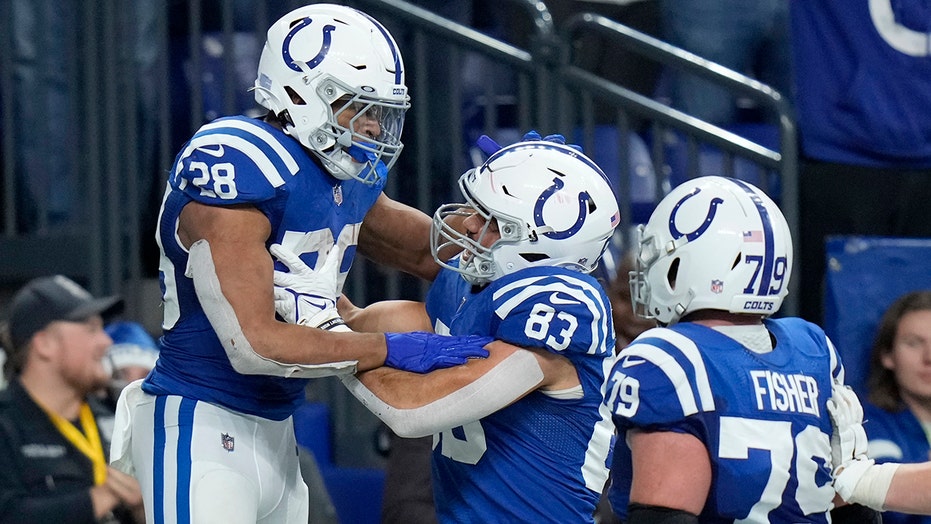 Jonathan Taylor ran for 170 yards and scored on a 67-yarder with 2:01 left to help the Indianapolis Colts seal a 27-17 victory over the New England Patriots on Saturday night.

The Colts (8-6) solidified their playoff hopes by winning for the fifth time in six games — and ending an eight-game losing streak to the rival Patriots (9-5).

Taylor has run for a touchdown in 11 straight games to tie Hall of Famer Lenny Moore for the longest streak in franchise history. 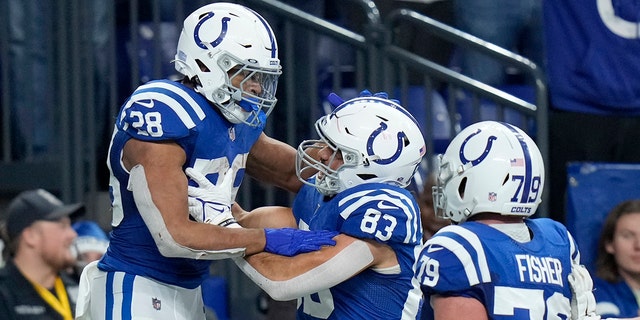 Indianapolis Colts running back Jonathan Taylor (28) is congratulated by Kylen Granson (83) and Eric Fisher (79) after scoring on a 67-yard touchdown run during the second half of an NFL football game against the New England Patriots Saturday, Dec. 18, 2021, in Indianapolis.
(AP Photo/AJ Mast)

The game had a little bit of everything — drama, physical play, shouting matches, even a fight that led to the ejections of Patriots safety Kyle Dugger and Colts receiver Michael Pittman Jr.

But Indy won this one by stealing a page out of Bill Belichick’s playbook — using the ground game to chew up the clock and closing it out with a back-breaking play in the waning minutes. It was Indy’s first win over New England since 2009.

And yet, it didn’t have to be this close.

The Colts and Taylor sent an early message by starting their second series with seven straight running plays before Taylor took a direct snap, handed off to Carson Wentz and then Wentz flipped the ball to Nyheim Hines for an 8-yard scoring pass and a 7-0 lead.

Matthew Adams followed that by blocking Jake Bailey’s punt that E.J. Speed recovered in the end zoner for a 14-0 lead — New England’s largest deficit since a Week 3 loss to New Orleans.

The Colts added a 25-yard field goal before halftime and another early in the third quarter to make it 20-0.

Rookie quarterback Mac Jones finally got the Patriots righted in the fourth quarter. He threw a 12-yard TD pass from Jones to Hunter Henry and after Nick Folk’s short field goal made it 20-10, Jones hooked up with Henry for a 7-yard scoring pass with 2:21 left.

Two plays later, Taylor eluded one tackle and sprinted to the front corner of the end zone.

Patriots: Played without top rusher Damien Harris (hamstring) and lost linebacker Ja’Whaun Bentley (ankle) in the first half. Receiver Nelson Agholor left late in the third quarter with a head injury. Agholor eventually was taken to the locker room.

Colts: Center Ryan Kelly missed his second straight game after being a late scratch. He was activated off the reserve/COVID-19 list Tuesday but was listed on the injury report with an injured knee and missed time because of a personal matter. Linebacker Darius Leonard left briefly in the first half with a right shoulder or arm injury and cornerback Xavier Rhodes walked off the field early in the fourth quarter.

Colts: At Arizona next Saturday night.