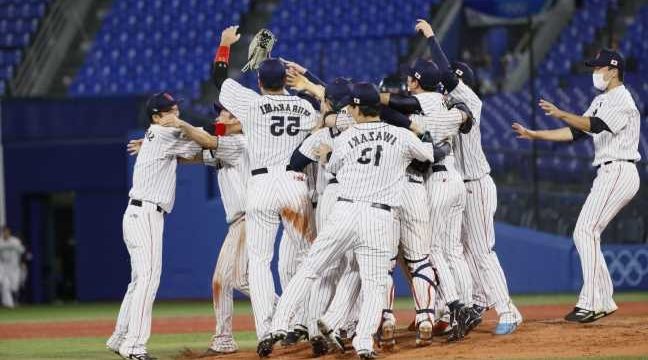 Masato Morishita and four relievers combined on a six-hitter, and the Japanese men (5-0) matched the accomplishment of the women’s softball team, which upended the Americans for their second straight gold medal.

Several hundred people who appeared to be Olympic volunteers cheered on Japan in a largely empty 34,000-capacity Yokohama Stadium, some wearing orange Japan jerseys and matching facemasks on the warm and humid night.

America, the nation that introduced baseball to Japan in 1872, finished 4-2. Teams were denied access to all 40-man roster players and many eligible top prospects by Major League Baseball and its clubs, hindering the U.S. and other countries whose top players are in MLB.

Murakami, at 21 the youngest player in Japan’s starting lineup but already a two-time All-Star in four seasons with the Central League’s Yakult Swallows, reached out for an 85.2 mph offspeed pitch with a 2-2 count from Nick Martinez (1-1). He drove the ball to the opposite field, over the 16-foot wall in left-center, and Martinez winced as it landed in the fourth row of the empty blue seats.

Japan added an unearned run in the eighth when Masataka Yoshida singled off reliever Scott McGough and center fielder Jack Lopez heaved the ball past the plate for an error that allowed Tetsuto Yamada to score. The Japanese beat the U.S. for the second time in six days, also rallying in the ninth and winning 7-6 in 10 innings on Aug. 2.

Morishita (2-0), a 23-year-old right-hander on the Hiroshima Toyo Carp who is the reigning Central League Rookie of the Year, held the U.S. to three hits over five innings, struck out five and walked none.

Kodai Senga, a 28-year-old right-hander on the Pacific League’s Fukuoka SoftBank Hawks viewed as a possible future MLB pitcher, followed with 98 mph heat in the sixth.

Hiromi Itoh pitched the seventh and gave up a leadoff single to Tyler Austin in the eighth.

Suguru Iwazaki, a 30-year-old lefty with the Central League’s Hanshin Tigers, relieved and struck out Boston prospect Triston Casas, retired Todd Frazier on a popup and got Eric Filia to ground into a forceout.

Ryoji Kuribayashi, a 25-year-old first-time All-Star for Hiroshima, finished with a perfect ninth for his third save, gave up a one-out single to Nick Allen, then retired Lopez on a forceout.

Japanese players streamed onto the mound, the relievers rinning in from the bullpen. At one point, manager Atsunori Inaba was hoisted into the air by players and thrown up and down on the mound as if on a trampoline. Players also lined up on the third base line and bowed to their supporters.

Martinez, a 31-year-old former Texas right-hander in his fourth season pitching in Japan, allowed five hits in six innings with seven strikeouts and one walk.

Former Los Angeles Angels manager Mike Scioscia was denied in his attempt to match the feat of his mentor, late Los Angeles Dodgers manager Tommy Lasorda, who led the U.S. to a baseball gold medal in 2000.

And while second baseman Eddy Alvarez became just the third American and sixth athlete overall to win medals at the Winter and Summer Games, he failed to gain gold and matched the silver he earned as a speedskater in 2014.

Baseball was contested in the Olympics for just the sixth time, the first since 2008, restored at the request of Japan as the host nation. It already has been dropped for the 2024 Paris Games but may return for 2028 in Los Angeles and 2032 in Brisbane, Australia.

Japan stopped its major league season on July 17 and allowed top players to assemble for the Olympics. MLB executives scoffed at the concept of sending top players to the Olympics, saying it was impractical and uneconomical to stop the season and many GMs rejecting out of hand the thought of risking players to injury for any game other than with the club that pays their checks.

While the Japanese team lacked MLB stars Shohei Ohtani and Yu Darvish, they still had enough might to twice beat the resulting U.S. roster that was a dubious mix of prospects from Double-A considered not close to big league ready, released major league veterans and career minor leaguers.