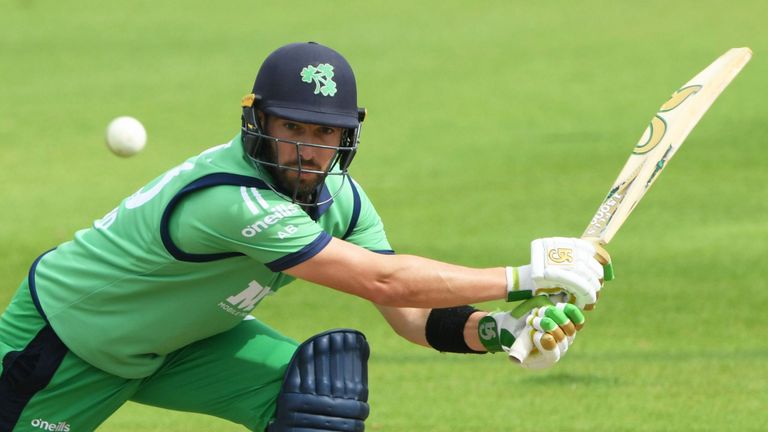 Ireland captain Andrew Balbirnie is convinced England remain a “dangerous animal” even though they will be without several of their World Cup winners during the Royal London series.

Ben Stokes, Joe Root, Jofra Archer, Jos Buttler, Chris Woakes and Mark Wood are all absent for the three day-night one-day internationals at the Ageas Bowl – the six players being part of the Test squad instead ahead of next week’s first Test against Pakistan.

However, the aggressive mindset that led to England’s historic triumph last year has filtered down, as Sussex opener Phil Salt showed as he flayed a 58-ball hundred for the Lions against Ireland last weekend.

Salt’s innings was not enough to earn selection to a 14-man squad for a series which gets under way on Thursday on Sky Sports Cricket at 1.30pm, highlighting the batting reserves England are able to summon.

Balbirnie said: “You just have to look at the Lions game and Phil Salt’s hundred was outstanding batting.

“The way (England captain) Eoin Morgan’s brought this team forward with this exciting brand of cricket, I think that’s probably had a knock-on effect in county cricket.

“Everyone trying to get into the England team has to bat at that sort of a tempo so you do get that sort of competition for places and anyone who does come in plays that sort of game.

“It is a dangerous animal, there are people with points to prove in this team for England, we’ve just got to make sure we do our things as well as we can and stop them from showcasing how good they are.”

The task facing Ireland ahead of their date with the world champions was emphasised when a largely second-string Lions outfit chased down 297 with more than 15 overs to spare.

Balbirnie said: “There’s no doubt about it that the batters the England squad have available to them are world class and they have this over-aggressive way when they come and bat.

“It’s great for the spectator to watch but it certainly puts our bowlers under the pump. Hopefully our guys can put that out of their mind, go out and enjoy themselves and do their skills.”

The series marks the start of the inaugural ICC Cricket World Cup Super League, a two-year tournament involving the 12 full member nations and Holland which serves as part of the qualification process towards the next 50-over World Cup.

While Ireland will avoid Australia, India, Sri Lanka and Pakistan, Balbirnie knows sealing direct entry to India 2023 through the competition will be extremely difficult.

But given the circumstances of the past few months, with the coronavirus pandemic threatening to wipe out the entirety of Ireland’s summer schedule, Balbirnie is content just to get back on to the field.

He added: “It’s World Cup qualification and my aim when I came (in as captain) was to qualify for that World Cup.

“First and foremost the Super League is our opportunity to get in, it’s going to be super tough, it will be this team’s greatest achievement if we qualify through the top seven. We’ve got a lot of tough cricket to play.

“But first and foremost we’ve got these three games which I didn’t think we’d have so we’re going to go out with a smile on our face and the sun shining down here, it will be a great occasion for cricket.”