Two key Hockeyroos players remain barred from the squad at the governing body’s behest more than 100 days since they appealed their axings and their requests to train with the squad in the meantime are also being repeatedly rejected.

The players, who want to compete at the Tokyo Olympics in June, remain frozen out of the squad despite the fact the selectors who dropped them have all resigned from their roles since the appeals were launched. 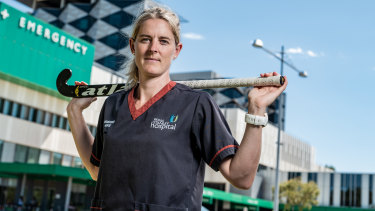 Current world goalkeeper of the year Rachael Lynch is one of two players appealing their Hockeyroos axing. Credit:Tony McDonough

Their omissions were a flashpoint in the current unrest in the Hockeyroos camp. An independent report recently described HA’s practices and the culture surrounding the team as “dysfunctional”. Coach Paul Gaudoin resigned hours before the report was released.

But as the players’ wait for their appeal result drags on – it is now 113 days and counting – Morgan and Lynch have had repeated requests to train with the squad rejected by Hockey Australia.

The most recent rejection occurred days ago, with the players barred from intra-squad matches and a training camp that has followed, according to sources with knowledge of the requests.

With the Tokyo Olympics set to start in June, they’ve been forced to train away from the squad for months (although the WA Institute of Sport has provided some training facilities) and want to be ready for the Olympics in the event their appeals are succesful.

The delay has also prompted the Australian Hockey Players Association to plead for the matter to be quickly resolved.

“The AHPA recognises the importance of a thorough process, however, would call on all parties involved for a swift resolution to this matter for the wellbeing of our members including Rachael, Georgina and the current Hockeyroos playing group.

“Our members have demonstrated incredible resilience over the past five months, and we hope that a decision will provide much sought closure and enable them to direct their focus on the upcoming Tokyo Olympic Games and the sustained success of the Hockeyroos.”

Reasons for the delay include problems allowing access to documents relevant to the appeal. The appeals have been launched on the basis that selection policy was not followed in coming to the decision to drop Morgan and Lynch.

Three of the 29 recommendations in the report into the Hockeyroos’ culture suggested the selection process at Hockey Australia needed to be strengthened.

HA chief executive Matt Favier told Fox Sports this week that he is “hoping that this matter will be resolved quickly” and that “we are operating as quickly as possible to resolve these appeals”.

Last week players were further angered when Favier suggested legendary coach Ric Charlesworth could make a return to the Hockeyroos.

Players have been angry with Charlesworth since late last year when he spoke publicly about having to deal with “loud voices that do not reflect the team’s will or wishes” from his time as Hockeyroos coach. He referred to their behaviour as “group think”.