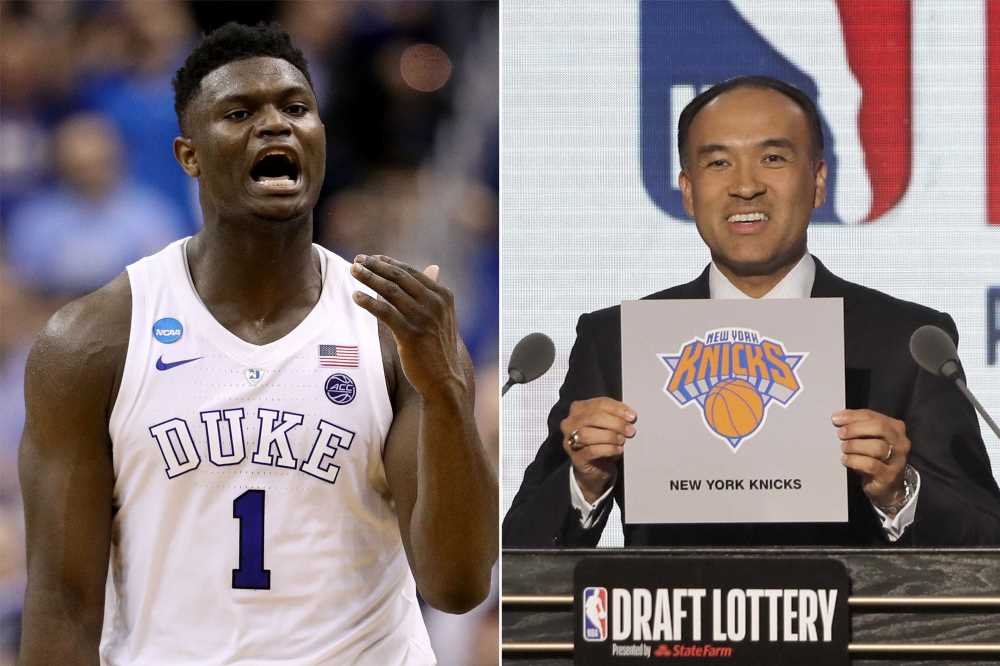 Just show us the draft order.

That was the general sentiment from fans last year as ESPN’s hour-long NBA draft lottery special went nearly 40 minutes before revealing a single pick. Tuesday’s coverage is designed to bring clarity with two lead-ins for the lottery — “NBA Countdown” (7-8 p.m.) and “The Jump” (8-8:30 p.m.) — before the show starts, with the envelopes being revealed approximately 10 minutes later.

“Regardless of what happened last year, our mission is to serve sports fans and to make content as consumable and as easily accessible as possible and set their expectations,” said ESPN vice president of production Mike Shiffman, who is overseeing the coverage for the first time.

“I think having these distinct shows the way they are laid out accomplishes that.”

Less suspense does not mean less drama, particularly for Knicks fans. They are one of three teams — along with the Cavaliers and Suns — with the best chance to win the No. 1 pick and the ability to draft Duke star Zion Williamson with it.

Rachel Nichols will host both “The Jump” and the lottery broadcast surrounded by NBA and college analysts, with Jay Williams and Maria Taylor being added to this year’s coverage.

“Each year we are trying to innovate and evolve all of our shows and obviously lottery night is one of them,” Shiffman said when asked if Tuesday is getting special attention because of Williamson.

“We are aware, we are not naive, we know there’s interest in Zion. But any show we go into, we want to be at our best and look to innovate it. Our real goal and strategy is to be as fan-friendly as possible as to what to expect with the coverage both before and after the lottery.”

ESPN’s coverage will include live shots of fan watch parties in New York as fans cry tears of joy or sadness before going to coverage of Game 1 or 2 of the Western Conference finals.

“They’re clearly one of the lead stories going in based on the fan interest, being one of the team’s with the highest percentage and having one of their former superstars [Patrick Ewing] as a rep,” Shiffman said of the Knicks.

MSG Network will not have the actual lottery reveal, but it will have 2 ¹/₂ hours of Knicks-focused coverage on its “MSG 150” show that launched Monday and airs four day a week and runs for 10 weeks. Their coverage will include an interview with Ewing, the Knicks’ No. 1 pick in 1985, who is representing the team on the dais.

“We are going to be live for that, and if they get the fifth-overall pick we are all just going to walk off the set,” joked host Bill Pidto, who will be joined by analysts Alan Hahn, Swin Cash and Wally Szczerbiak.

MSG will have 90 minutes to break down the Knicks’ landing spot — which is the chance for an hour-and-a-half of Zion dunking highlights or debating the traits of Ja Morant against RJ Barrett.

“The interesting thing is no one is a lock,” Pidto said. “Who knows, you may get a star at No. 4 or 5. No matter where they land with this draft pick it’s going to be a huge talking point, not only next week when we are on live, but the whole summer.”

Since its debut Monday, “MSG 150” has had interviews with the Knicks hierarchy of coach David Fizdale, team president Steve Mills and general manager Scott Perry.

“There will obviously be an initial reaction to all this, but the endgame we won’t know for a few years,” Pidto said. “It just makes it all so fascinating.”