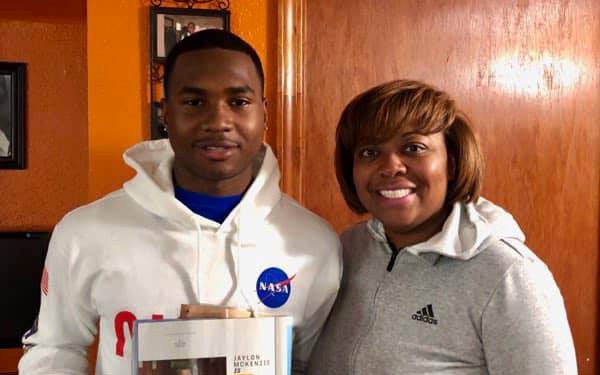 A 14-year-old recently featured in Sports Illustrated as one of six teens “who will rule the future in sports” died after he was shot at a party in Illinois on Saturday night, according to police.

The shooting killed Jaylon McKenzie, 14, an eighth-grade student at Central Junior High School in Belleville, Ill., not far from East St. Louis. A 15-year-old girl was critically injured, police said, adding that no arrests have been made.

McKenzie’s mother said witnesses told her Jaylon was hit by a stray bullet after a fight broke out at the party, The St. Louis Post-Dispatch reported.

“It’s so hard to fathom that someone took my baby from me because he dreamed so big,” McKenzie’s mother, Sukeena Gunner, told the Post-Dispatch. “I can just remember him coming into my room and telling my husband to call his name. ‘We have a 5-6 running back, Jayyyyy-lonnnn MacKenzieeee.’ And he would run into the room after his name was called.”

In November, McKenzie told Sports Illustrated his goal was to “Make the NFL,” and his dream was to be “a star in LA — for the Rams or the Chargers.”

Officers were responding to a report of a disturbance and shots fired at a large party. They said when they arrived they found McKenzie and the other teen were shot and needed medical attention. Police said officers immediately began life-saving measures before both victims were transported to nearby hospitals.

McKenzie was pronounced dead a short time after arriving at the hospital.

Gunner told the St. Louis Post Dispatch that her son had been to his school’s eighth-grade dance earlier that night. She said he later went to another school’s post-prom party in Venice.

On Sunday, State Rep. LaToya Greenwood, D-East St. Louis, posted a picture of McKenzie on her Facebook page and wrote: “There is a sacredness in tears. They are not the mark of weakness, but of power. They speak more eloquently than ten thousand tongues. They are the messengers of overwhelming grief, of deep contrition, and of unspeakable love. #JaylonMcKenzie”

McKenzie played running back, receiver and defensive back. According to Sports Illustrated, he drew national attention in August when he caught five passes for 161 yards and two touchdowns to help the East team to a victory at the NFL’s 8th Grade All-American Game in Ohio.

He’d drawn the attention of college football coaches at the age of 14, the Post-Dispatch reported. He also reportedly got his first verbal scholarship offer in December from the University of Missouri and the University of Illinois reached out to him about a week ago.