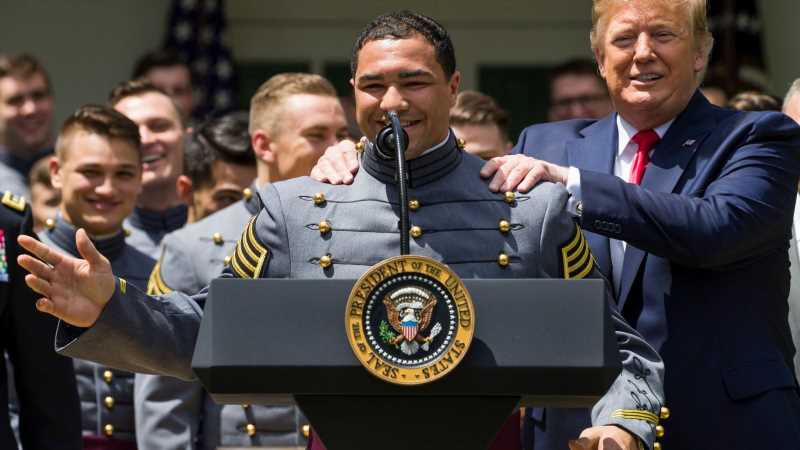 When Donald Trump’s administration decided in April of 2017 to overturn a rule that had allowed athletes from the service academies to defer their military commitment until after their professional sports careers were over, it wasn’t for any of the starchy reasons laid out in a memo from the–Secretary of Defense James Mattis, most of which came down to those athletes having been educated at taxpayer expense. As a matter of principle, Trump doesn’t like to see other people getting things at what he perceives to be a discount, but also the real reason he rescinded the rule was because the rule had been put in place by Barack Obama back in 2016.

“It kind of just sucked,” former Air Force linebacker Ryan Watson told USA Today in April. Watson had signed with the Cardinals as an undrafted free agent, but the rule being overturned meant that he would still have to spend his next two years on an air base in Ohio. “You either gave up on your dream, (or) you were put in a situation where it was a lot harder (to reach).”

On Monday, while hosting the Army Black Knights football team at the White House for the presentation of the Commander In Chief Trophy, Trump proudly announced that he’d had a big new idea and would you like to hear it?

“It’s a big deal,” Trump told Army’s team and coach. “I hope it doesn’t become the story but it is a big story because I’m going to look at doing a waiver for service academy athletes who can get into the major leagues, like the NFL, hockey, baseball. We’re going to see if we can do it and they’ll serve their time after they’re finished with professional sports. And that’ll make things, can you imagine this incredible coach with that little asset?” Trump had by that point turned away from the microphone so that he could honk the last few words at Army coach Jeff Monken.

“And so on behalf of the coach, who’s a tremendous guy, we’re going to look at a waiver for the service academies,” he continued. “I think it sounds good, right? I always watched, it used to be five years, then four years, it’s a long time, now it’s two years, but it’s another four years, four or five years, that you have to do things. I think it’s a great idea.”

It’s one of the undeniable achievements of his presidency that Trump has not altered his lifestyle at all since ascending to the most important job on earth. Everything that Trump did before he was president he still does now, and does just about as much. Trump clearly believed that being president was fundamentally a simple job that a series of idiot weaklings had failed at because they overthought and overcomplicated it; as with many things that Trump believes, that’s an argument that could almost be made to work, but which he is fundamentally incapable of and uninterested in making. There’s no deeper critique to find: He just didn’t understand why everyone wasn’t doing the Good Smart Deals instead of the Bad Stupid Deals. Trump clearly still thinks all this is true—he thinks that everything that he’s ever thought is true—and gets very angry when he is forced to do things like “work” or “listen,” both because they are things he dislikes and because they are outside what he understood to be the job description for President Of The United States.

Conveniently if unsurprisingly, Trump clearly thought that everything he already did every day was what presidents already do, and that he therefore would do it well. And that is not a long list. He is squinting thoughtfully at a large TV in an air-conditioned room while it blares a Raymour & Flanigan advertisement at paint-peeling volume, or he is getting upset about things he sees on cable news between those commercials and then posting online about how upset he is, or he is crowing triumphantly that someone on TV is talking about him. Or maybe he is driving a golf cart into and out of sand traps on a golf course he owns. Or he is on the phone, barking out unworkable orders to confused underlings or cold-calling various wealthy acquaintances to gossip and complain about other people from the golf club. Always, always, he is at the center of a roiling cloud of lawsuits, some serious and others spurious, all of which reflect his lifelong dedication to ripping people off whenever and wherever he can.

There is one other component to the job, as Trump understood and understands it, and that is throwing parties. These are not fun parties, but he is not a fun guy. They are big gilded formal-dress affairs with shitty music and a gleaming beef lump perspiring under a carving station heat lamp and someone going around taking photos. At some point, Trump will get up to Make Some Remarks. He has always done this—he famously did this at various weddings and parties at his clubs even when he didn’t know anyone involved—and now that he is president he continues to do it. To see him comfortable, in his job and in his own skin, you should check him out pivoting at random and chuckling at his own jokes in his ceremonial role as Toastmaster In Chief. In what he perceives to be a friendly crowd, in a role that he knows pretty much by heart, Trump is … well, still very weird, but decidedly in his element. This was how it went when Army visited the White House.

The problem is that this isn’t all Trump’s job is. It’s part of it, and it’s clearly the part that he enjoys—even when surrounded by people who transparently think he’s an oaf and a joke, he is not just comfortable but delighted to be doing this sort of holding forth. The big guy loves to talk, and clearly considered Army’s football team to be his dear friends and sincere admirers. It’s one of his favorite formulations, one of the stock phrases that his gluey dumpling of a brain periodically shoves towards his mouth: [Other person] likes me, and I like them.

All of this can be done by rote. The trouble doesn’t start when Trump has to stop talking, because he can’t listen and can’t learn and doesn’t really remember things that don’t have to do with him. He remembers every slight and has spent his life cultivating and pursuing various opaque feuds, but what that pursuit does to other people doesn’t stick in his mind if it ever even alights there in the first place. The service academy athletes that Trump boned out of NFL training camp invites on a whim back in 2017 were just more collateral damage in Trump’s lifelong campaign against every perceived offense he’s ever endured.

There’s no guarantee that this waiver for service academies will ever actually happen. When Trump says he is going to “look into something” he means nothing at all; his concern with the cadets squinting and shifting their weight behind him is negligible, whether they are bound for war or the Detroit Lions rookie minicamp; he seemed to have forgotten the coach’s name by the end of his presentation. If Trump follows through on the waiver, it will be because he sees it as a Win, which is the same reason he overturned the rule in the first place. It’s axiomatic that he doesn’t give a shit—he stops caring about what he’s saying the moment that people stop applauding for it.