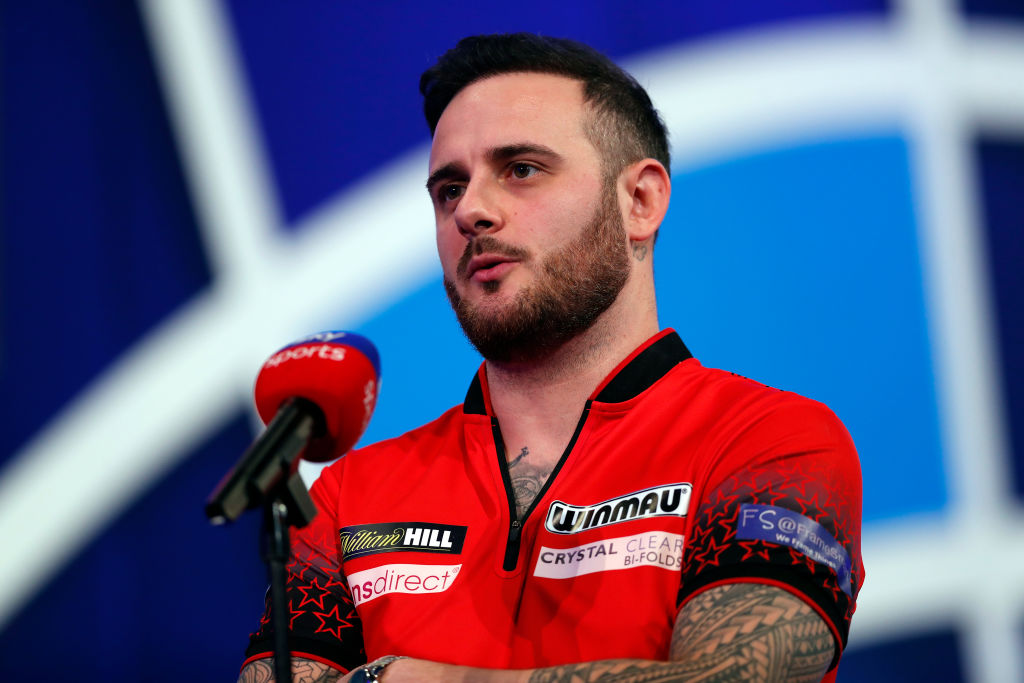 Joe Cullen feels he is in a select group of players that believe they can win the World Darts Championship, despite coming through the pain of losing his mum earlier this year.

The 32-year-old ended 2020 and began this year in fine fettle on the oche, but things derailed in June when his mum was diagnosed with cancer and darts was suddenly no longer a priority.

The Yorkshireman was understandably keen to spend as much time with his family as possible and darts took a backseat, with the disease tragically taking his mother’s life in October.

Cullen turned up and threw arrows as much as he could manage during this tragic time, but his mind was elsewhere and results inevitably suffered.

‘It’s been a really difficult year for me away from the darts,’ he told Metro.co.uk. ‘I think start of the year I was probably top five in the world on form, I don’t think anyone could disagree with that.

‘I was getting to quarters, semis, finals and winning regularly. Towards the end of June my mum started to be unwell and, to put it bluntly, I just didn’t give a s**t about darts then.

‘I wanted to spend as much time as I could with my mum, so I wasn’t practicing, darts was irrelevant.

‘Life goes on and you’ve got to try and dig in but June onwards if you look at the results you can pinpoint exactly where my mum’s illness started. My mum passed at the start of October so I’m just trying to look ahead now and get my mind back on darts.

Remarkably, just days after the tragic death, Joe produced one of the finest runs of his career, making the European Championship semi-final, and says that darts meaning so little to him at the time could have helped.

‘It was detrimental but sometimes it worked for me,’ he explained. ‘I played in the Europeans four days after my mum passed away, I played Ted Evetts first game and beat him 6-0, but if he’d beat me 6-0 I couldn’t have cared less. I think that carefree attitude helped sometimes.’

It was an emotional time for those months that meant it was remarkable Cullen won any games, including a first round win at the World Matchplay in July which was especially poignant.

‘I played in Blackpool and beat Chris Dobey first game, I was nearly in tears when I won and people didn’t know why,’ said Cullen. ‘That was the last game my mum came to watch me, she said she might not have chance to come again and she didn’t.

‘I’ve never been one to show much emotion but when I won and looked over, things hit you don’t they? We’re only human.’

Cullen didn’t want the public to know about his family matters, but as results dipped, he got the inevitable idiotic abuse from people on social media.

It is a problem that Joe has dealt with before, ridiculously even seeing his son targeted by online trolls.

‘People don’t know. I was getting messages saying I should be preparing for TV events more, but I didn’t want people to know,’ he said.

‘I was a bit upset it got mentioned on TV. But then I got messages from people who had slagged me off, one of them apologised which I then thought, fair enough, but someone else tried to justify it. It’s mental.

‘Someone messaged my son once, when he was 10, I can handle people messaging me but my 10-year-old son, f***ing hell!

‘He’d had Instagram for about a month, he was moaning about his mates having it, so we had log-ins, me and my wife. People are just weird aren’t they, it’s hard to know what goes through their heads.’

Now back trying to concentrate on the dartboard, Cullen goes to Alexandra Palace this year more confident than when he has previously arrived at the World Darts Championship.

The Rock Star’s first run as far as the fourth round last year was only ended in one of the greatest matches ever on the Ally Pally stage, when Cullen was edged out 4-3 by Michael van Gerwen despite hitting a record-equalling 19 180s.

That run ended a dire run of results for the Yorkshireman at the World Championships and he intends to continue to improve his record there.

‘I’ve had a shocking record there over the years, but last year was probably the first year I’ve shown I can play a bit there,’ he said.

‘This year is a bit different, I’ve gone in years past just hoping I can win at least one game. But last year, not just the results but the way I played…the Van Gerwen game didn’t go my way but I think it was game of the year. I think it showed that it takes something special to beat me nowadays, so I’m looking forward to it.

‘Immediately after the game I was gutted, inconsolable, but I think in the grand scheme of things it was just one game in hopefully a long career for me. I think my stock rose from that game, I had Premier League players messaging me – Declan Rice, James Maddison – so if you’re getting that sort of recognition then it’s good for me and the sport.’

While it’s tough for youngsters to make an impact on the sport’s biggest stage, Cullen was at a loss as to why his record at Ally Pally was quite so bad, having lost the opening game on his first six visits to the venue.

‘I did have tough draws but it was more…it was a really strange one,’ he pondered. ‘I think I lost nine out of 10 first round games and a couple of those times I was more hoping to win than thinking I would. But the other times I was genuinely feeling good. It just didn’t happen, it’s a really odd one.

‘Ironically, the first win I had there was against the best performance I’ve had against me, Corey Cadby [at the 2017 World Championship].’

Into the world’s top 16 and a multiple-time tournament winner Cullen has got plenty of monkeys off his back, but still feels the pressure that he puts on himself as he knows how good he can be.

Still only 32, despite embarking on his 12th World Championship campaign this year, Cullen knows there is more to come from him, and that could well be a world title.

‘It’s more the pressure from within now, everyone’s desperate to do well at the Worlds, the whole year builds up to it,’ he said. ‘If you do well you can get in the Premier League, the Worlds can change your life. If Gerywn Price never wins another game for the rest of his life he’s still a world champion.

‘Everyone is aiming at being world champion. You have different goals each year from the start, but the last three years I’ve felt I’m good enough to win it.

‘Before that you’d think, “if someone offered me a last 16 now I’d take it” but your mindset changes as you get better and more mature. I’ve got more big stage experience then a lot of people much older than me.

‘There’s a handful of people that genuinely think they can win it, and I’m definitely one of them.’

Cullen gets his campaign underway against Jim Williams on Wednesday afternoon.