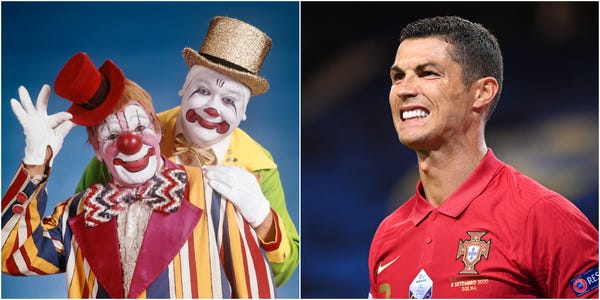 There are plenty of ways you could describe the feeling of playing soccer in an empty stadium: desolate, eery, noiseless.

Cristiano Ronaldo, however, says it is like going to the circus and not seeing any clowns.

The 35-year-old scored scored twice as Portugal beat Sweden 2-0 in the UEFA Nations League on Tuesday night, with his brace taking his total of international goals to an astonishing 101.

While it was a landmark occasion for the Juventus forward, he was unable to share the moment with fans, with the match in Stockholm being played behind closed doors due to the coronavirus pandemic.

"When I do something I like to be whistled because it gives me chills," Ronaldo told RTP after the match. "But health comes first, if the WHO [World Health Organization] says that these aren't safe conditions, that's it. The most important thing is the human being.

What Ronaldo meant exactly by the strange comparison is unclear, however read literally, it would mean the fans are the clowns, which a number of people were quick to point out on social media.

"Ronaldo literally called his fans clowns," said one Twitter user, while another said: "So football is a circus and your fans are clowns? Nice choice of words."

Great at scoring goals, not so great at analogies.