CONOR McGREGOR looked in phenomenal shape as he shared topless training pictures with his fans.

The Notorious shared snaps of himself midway through a cycle along the beach as he prepares for his rematch with Dustin Poirier. 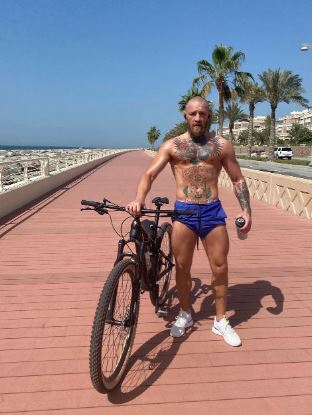 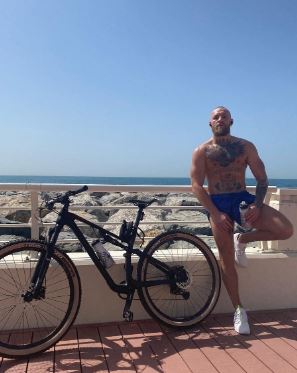 The American KOd the Notorious in January, exacting revenge seven years after McGregor floored him in Las Vegas.

But the 32-year-old turned it down leaving Michael Chandler to take on Charles Oliveira for the belt on May 15.

The UFC initially wanted to arrange the duo's third fight in May but were unable to finalise a deal with both fighters.

According to ESPN's Ariel Helwani, the third instalment is now being targeted for July.

Despite the delay, McGregor is training hard to make sure he is ready for the summer showdown.

And he shared progress shots with his 39.5million followers as he cycled along the beach in a mystery sunny hot spot.

The topless Irishman posed topless next to his black bike and wrote: "Green zone on the @mcgregorfast program. The foundation!"

BETTING SPECIAL – GET 30/1 ON FRANCIS NGANNOU TO WIN VIA KO, TKO OR DQ

McGregor was pictured signing an autograph for a young fan on Friday.

And his former opponent Eddie Alvarez said he needs to 'harden up' in order to beat Poirier this summer.

Dana White labelled Poirier smart for accepting the rematch instead of taking the title fight.