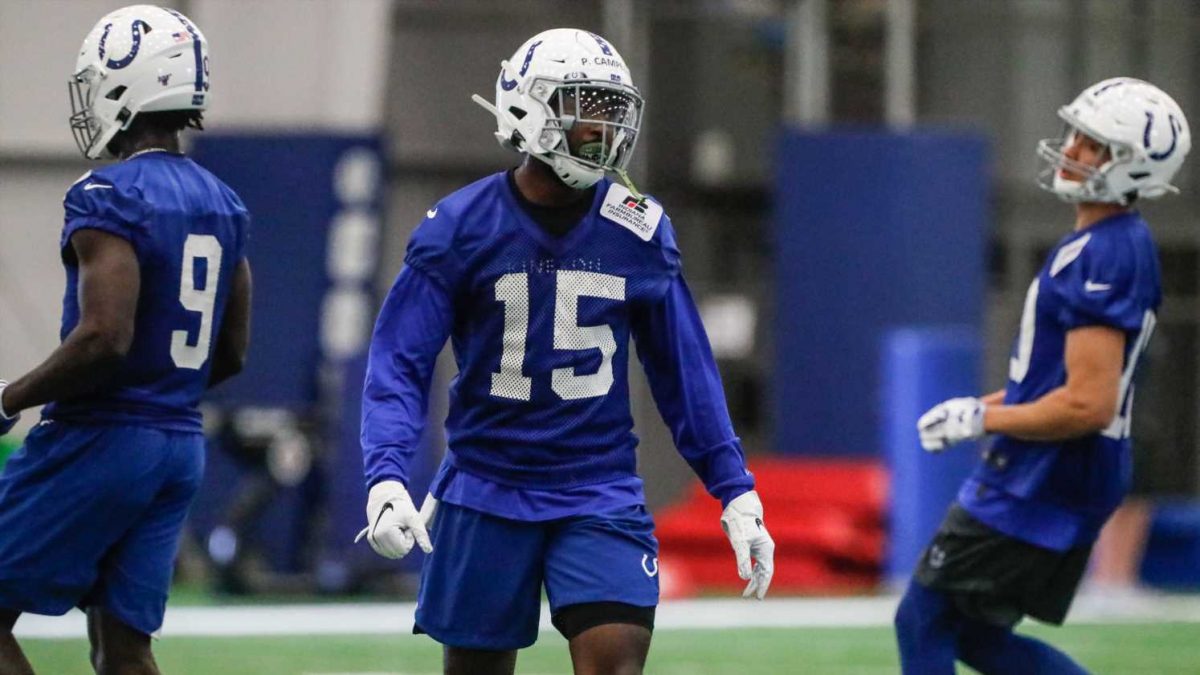 INDIANAPOLIS – It’s May, they’re in shorts, and half the players on the field with him Friday probably won’t ever see a meaningful snap in the NFL. A proper amount of perspective is needed.

That being said: you can already see it in Parris Campbell — the size you didn’t expect, the speed you can’t teach, the hands that’ll serve him well at this level. You can see what had Frank Reich giddy in the draft room; you can see why he has the Indianapolis Colts so excited.

Campbell, the second-round pick out of Ohio State, flaunted his receiving repertoire Friday afternoon at the team’s first workout of a three-day rookie minicamp. For most of the practice he was the best player on the field, and it was an early glimpse into how Reich envisions using Campbell once the real football arrives: Shots deep, slants across the middle, screens they hope No. 15 turns into massive gains.

“I’m just excited to come into an explosive offense and add another piece,” Campbell said Friday.

Parris Campbell,15, a Indianapolis Colts rookie wide receiver and second-round pick out of Ohio State, runs drills with his new team during practice at the Indiana Farm Bureau Football Center, on Friday, May 3, 2019. (Photo: Michelle Pemberton/IndyStar)

Don’t be surprised if in a few years the Colts are credited with getting a steal at No. 59 in last week’s draft. Campbell’s skillset figures to slide seamlessly into Reich’s multiple offensive scheme, and one of his greatest talents — his ability to pile on chunk yards after the catch — adds a much-needed dimension to a unit that struggled in that area last season. Reich desperately wants to change that in Year 2.

Enter: Campbell, his 4.31 speed, and his past experience at the running back position.

“The guy’s run-after-catch is exceptional,” said the Colts’ area scout who graded Campbell, Chad Henry. “There’s some plays you can turn on over the past few years, and you’re like, ‘Holy cow’ … He’s got that dimension you’re looking for.”

It’s probably no coincidence the locker they picked out for the rookie at the team’s training complex is right next to T.Y. Hilton’s.

“I’m gonna be attached to his hip,” Campbell vowed Friday.

It’s part of the design: By grabbing Campbell in last week’s draft, the Colts hope the former Buckeye develops into enough of a weapon that opposing secondaries can’t key in on Hilton, for years the Colts’ only real downfield threat. Indy’s lack of depth at receiver was a glaring issue for most of 2018, band-aided only by the midseason signings of Marcus Johnson and Dontrelle Inman. GM Chris Ballard doesn’t want to find himself in that spot again, scouring the free agent market for help in October, asking new arrivals to absorb Reich’s layered offense in a matter of days before kickoff arrives on Sunday.

That’s why Ballard went out and signed Devin Funchess to a one-year deal, and that’s why he drafted Campbell in the second round last week. The more capable targets for Andrew Luck, the better.

The one knock Campbell kept hearing during the draft process stemmed from his limited use at Ohio State. Relied almost exclusively as a slot receiver, Campbell said NFL teams questioned if he could run a full route tree, or if he could regularly win matchups on the outside. He aims to put those doubts to rest come this fall.

“Since I never done it, everyone just kinda put a ‘no’ on it,” he said. “But I’m not going to lie to you, it’s something I need to work on just because I didn’t have experience.”

If Friday was an early indication, the Colts won’t keep him stationary: Campbell saw plenty of snaps in the slot but also worked outside, including a few reps against fellow second-round pick Rock Ya-Sin. He made a handful of contested catches, and broke a few open for healthy gains. No. 15 wasn’t just active; he was productive.

“Dream come true,” he said of getting his first taste of the NFL. “I think this place is a perfect fit for me. Just love the energy, love the vibe, it reminds me a little of Ohio State, just the way the culture is.”

A reminder: It’s Practice 1, and Week 1, of his NFL career. Minicamp isn’t for another six weeks. Training camp’s not for another 10. The start of the regular season is four months away.

Parris Campbell is just getting started with the Indianapolis Colts. One workout in, and returns are promising.

QB Kelly in town trying out

Former Mississippi quarterback Chad Kelly, nephew of Hall of Famer Jim Kelly and a former seventh-round pick of the Denver Broncos who was released by the team last fall after being arrested on suspicion of criminal trespassing, is among the 34 tryout players in Indianapolis this weekend.