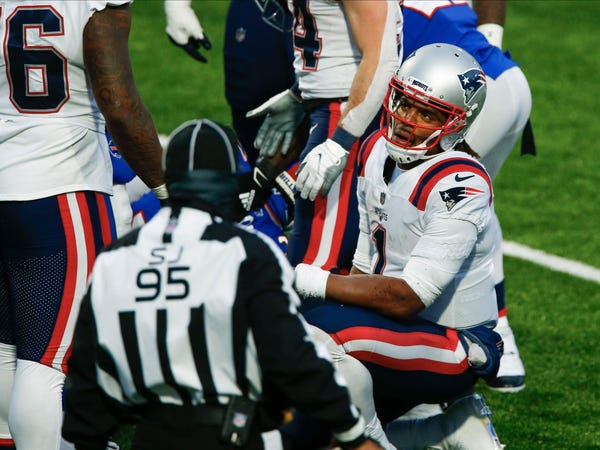 The New England Patriots lost a heartbreaker to the Buffalo Bills on Sunday, falling 24-21 to cap off their first four-game losing streak in 18 years.

Sunday's loss was especially heartbreaking, as the Patriots looked to be in control of things in the final seconds of the game.

Trailing the Bills 24-21, the Patriots took over possession with just over four minutes left to try and drive for a game-tying or even game-winning score. After a sustained march downfield, the Patriots found themselves at the Bills 19-yard line with just under a minute remaining — comfortably in position to attempt a field goal to force overtime, but with enough time left to take a few shots at the end zone to win the game.

But the Patriots dreams were dashed when quarterback Cam Newton fumbled the ball while attempting to finish a run.

The Bills took over possession and knelt away the final seconds of the game, finally snapping a seven-game losing streak against their division rival.

For Newton, it was another brutal play in a season that has fallen apart mid-flight. After a hot start to the season that made it appear as though both the Patriots and Newton were back to being contenders, New England has fallen apart over the past month, losing four straight games for the first time since the 2002 season.

Now 2-5 on the year, and a full three games out of the division lead, it looks as though the Patriots two-decade reign atop the AFC East is coming to an end.