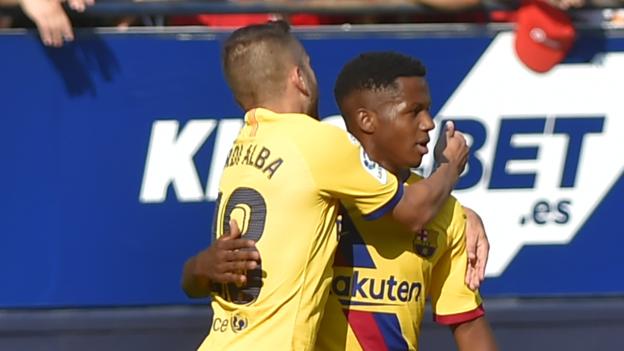 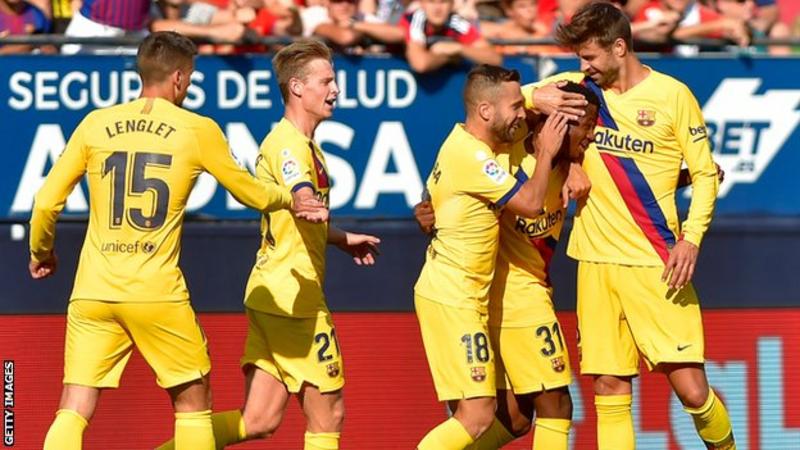 Roberto Torres gave Osasuna the lead early on with a sweet volley from Brandon’s cross.

Fati came on at half-time for his second Barca appearance and headed in Carles Perez’s cross six minutes later to equalise.

Perez then set up Arthur to put Barca ahead with a 16-yard shot but Torres equalised with a late penalty.

That kick was awarded after Gerard Pique handled Oier’s cross.

Winger Fati has been with Barcelona’s youth academy since 2012. He was born in Guinea-Bissau but moved to Spain at the age of six with his family.

He has not played for the country of his birth at any level, and Spanish media claim that Spain want to call him up to their youth teams.

Fati was the youngest player to make his Barca debut since 1941 when he came on last Sunday, with 12 minutes remaining, in a 5-2 win over Real Betis.

And this time he was brought on at a crucial point – when Barcelona were behind – and he got them level with a towering header from Perez’s cross.

Barcelona really missed star forward Lionel Messi, who is yet to play this season because of a calf injury, in another disjointed performance.

They lost on the opening day to Athletic Bilbao before coming from behind to beat Betis last weekend.

After their draw with Osasuna, they have collected just four points, their worst return from three games since 2008-09. However, they went on to win the league that season under Pep Guardiola.

That they needed two goals from substitutes in Fati and Arthur, neither of whom had scored for Barcelona before, and blew a lead late on after battling back will be a concern for boss Ernesto Valverde.

Osasuna, who won last season’s second division title, are yet to lose in three games since their La Liga return.

Clément Lenglet (Barcelona) is shown the yellow card for a bad foul.

Chimy Avila (Osasuna) wins a free kick in the defensive half.

Clément Lenglet (Barcelona) wins a free kick in the defensive half.

Jon Moncayola (Osasuna) is shown the yellow card for a bad foul.

Arthur (Barcelona) wins a free kick in the attacking half.

Attempt missed. Roberto Torres (Osasuna) right footed shot from a difficult angle on the right is too high. Assisted by Chimy Avila.

Penalty conceded by Gerard Piqué (Barcelona) with a hand ball in the penalty area.

Nacho Vidal (Osasuna) wins a free kick in the attacking half.

Attempt saved. Juan Villar (Osasuna) right footed shot from outside the box is saved in the top left corner. Assisted by Oier Sanjurjo.

Attempt missed. Roberto Torres (Osasuna) header from the centre of the box is too high. Assisted by Brandon with a cross.

Sergi Roberto (Barcelona) wins a free kick in the defensive half.

Sergio Busquets (Barcelona) wins a free kick in the defensive half.

Attempt saved. Roberto Torres (Osasuna) right footed shot from outside the box is saved in the top right corner. Assisted by Brandon.

Offside, Barcelona. Arthur tries a through ball, but Antoine Griezmann is caught offside.

Arthur (Barcelona) wins a free kick in the attacking half.

Clément Lenglet (Barcelona) wins a free kick in the defensive half.

Attempt missed. Brandon (Osasuna) header from the centre of the box misses to the right. Assisted by Roberto Torres with a cross.

Goal! Osasuna 1, Barcelona 2. Arthur (Barcelona) right footed shot from the centre of the box to the bottom right corner. Assisted by Carles Pérez.