The sports gravy train in Australia will slip most of its carriages following recent filings, both here and in the US by News Corporation, signalling spending cuts by Foxtel on "non-marquee sporting content".

The subscription TV service, owned 65 per cent by News Corporation, funds approximately 80 per cent of broadcasting fees paid to Australian sports, with its most recent $1.2 billion cricket deal with Seven West Media the catalyst of the coming train wreck. 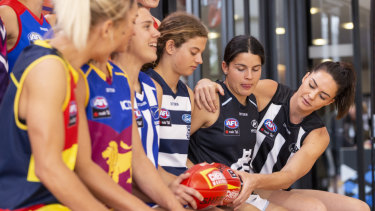 AFLW players attend a launch last year of a four-year broadcast deal with Foxtel and Seven.Credit:AAP

Foxtel’s cost-cutting represents an immediate challenge for Rugby Australia, a crisis for FFA in two years time and a problem for Supercars.

Even the major winter codes, such as NRL and AFL, will flatline revenue wise and be forced to increase attendance, sponsorships and membership sales if they want to sustain players' salaries at current levels.

The NRL and AFL have wisely developed their own online media services in order to create competitive tension with Foxtel when the current rights deals expire at the end of 2020 but cannot expect the doubling of revenue that has occurred in the past.

The statement by News Corporation to the Australian Stock Exchange that Foxtel lost $417 million in 2018 and needs to refinance a debt of $US1.68 billion comes less than a week before a federal election where Labor has signalled its fury with the Rupert Murdoch-controlled media empire.

Labor’s communications shadow minister, Michelle Rowland, has indicated a Shorten Government would strengthen anti-siphoning rules which are designed to give Australian viewers access to premium sporting content for free.

Foxtel’s chief executive, Patrick Delany, who initiated TV coverage of the inaugural Big Bash season, sought a return of this property from Channel Ten, rather than an expensive package which includes Test matches.

A Shorten Government would prefer to fund the burgeoning female sports leagues around Australia through their federations, rather than duplicate the $30 million given to Foxtel by the Turnbull Government to televise womens’ sport. 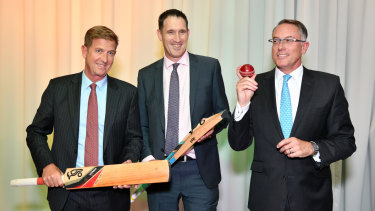 The only saviour for sports rights is if the so-called Four Horsemen of the Apocalypse – Apple, Google/YouTube, Facebook and Amazon – become mega players for the acquisition of sports media rights globally. However, other than Facebook’s unsuccessful $US660 million bid for the domestic IPL digital rights, they have only been minor bidders.

Furthermore, these big digital players would look at global sports, such as soccer, where they can spread rights fees over multiple countries.

However, this did not deter the AFL sending a small contingent of executives, led by chief executive, Gillion McLachlan, to Los Angeles last month to tease interest from the online behemoths. 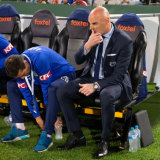 Foxtel branding is prominent on A-League pitches but the FFA could have a problem when the current deal runs out.Credit:AAP

Foxtel’s problem is the global occurrence of consumers moving away from pay TV, a phenomenon called “cord cutting".

Media consumption globally is continuing to evolve due to a proliferation of platform access across FTA TV, STV and OTT, either free or subscription service.

Low-cost subscription models on OTT like Netflix, Stan and now Kayo are cannibalising the traditional STV model of Foxtel.

A desperate Foxtel is even eating its own, with its wholly owned OTT service, Kayo Sports, needing five additional subscribers to compensate for the loss of one Foxtel subscriber. Kayo, designed to capitalise on the expected growth of cricket watchers, has only 290,000 subscribers.

In the USA three years ago, ESPN had 100 million subscribers but now has 80 million. Even before the online challenge, Fox Sports had a virtual monopoly for two decades yet could not grow its subscribers past 30 per cent of Australian households. The loss of the EPL rights was a further blow to Fox.

Firstly, there are two dominant football codes (NRL and AFL) that have a geographic bias with AFL being dominant in the south and west and NRL being strong in the north. The only football competition that has some Australia-wide interest is the NRL’s State of Origin. Even the two codes' grand finals are biased to their core geographies.

Secondly, the professional sports club network in Australia is one of the most concentrated in the world. There are currently 64 (next year 65) mens’ professional teams and 45 womens’ teams, soon to be 49 teams.

The cost to even a monopoly organisation like Foxtel to cater for such diverse sporting interest of a small population across a vast geographical spread has always been a gargantuan challenge, even for an engine driver like Rupert.

The sports gravy train, a beneficiary of Murdoch using them as what he described as a “battering ram" to expand his global pay TV network, has run off the rails in Australia as competition splinters online, internationally.