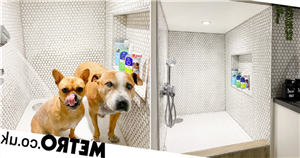 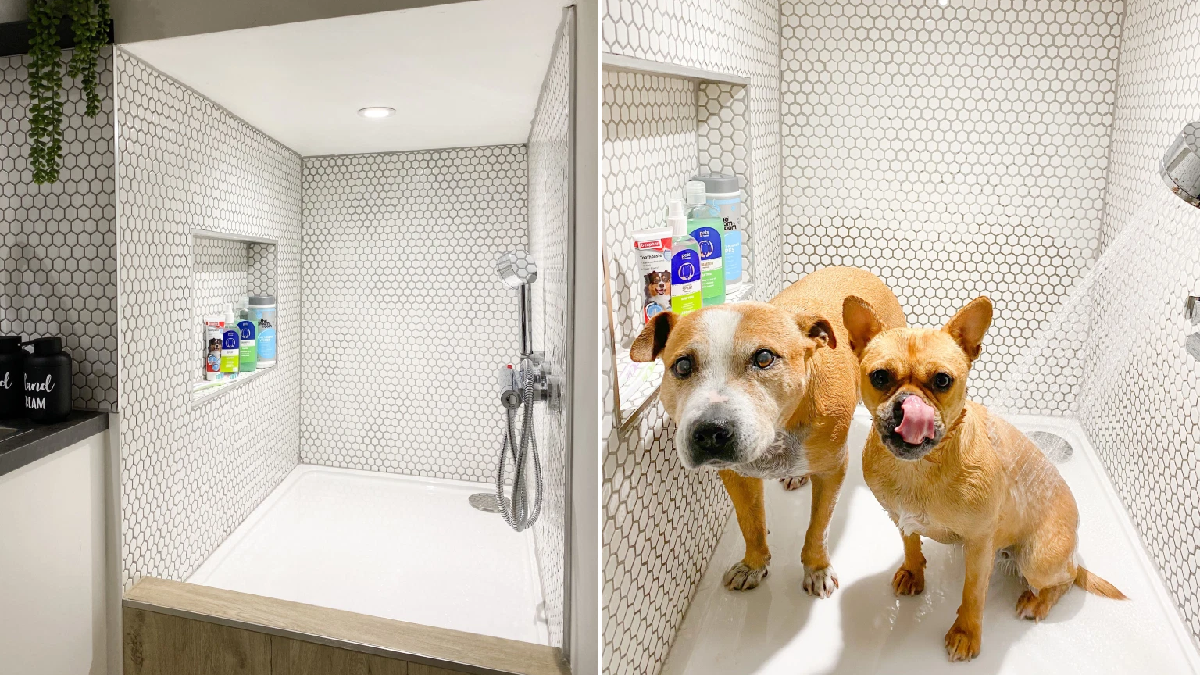 Dogs are great, but they can be seriously messy – particularly when they get back from a walk.

But one woman has created a super stylish solution that gets her dogs clean as a whistle before they enter the house – in the form of their own dog-sized walk-in shower.

Zoe Marquis created a stunning shower for her two dogs Martel and Henny.

Zoe, from Windsor, Berkshire spent £500 building a shower area for her dogs in her recent garage renovation – and she says it’s a fantastic use of the space.

The 33-year-old recently transformed her whole house in one go. She even started a home interior Instagram account to document the changes to her new four-bedroom home @homestuffonly.

The savvy PA only moved into her new home in October 2020, and already it is looking incredible.

‘We bought our house at the end of 2020 and knew it needed a full refurb before we could move in,’ Zoe tells Drench.

‘When planning a project like that you have to think ahead, decide what you need from your home and imagine how you’d use each room.’

Zoe explained her reason for building the dog shower – and it makes sense given that she is so house-proud.

‘I love to take my two dogs on walks in the local fields whatever the weather and them coming home muddy is inevitable so showering them is a regular occurrence,’ she explains.

‘Once we had ordered a freestanding stone bath for the family bathroom, cleaning the dogs in that room became a no-go, and so the dog shower idea was born.

‘I had been combing Instagram for months looking at home accounts to gain inspiration and saw a lot of American homes have dog washes. At first, it was just a wacky idea, but I soon realised it was actually possible and not at all expensive to create.

‘Every tradesman laughed at the idea and it’s still a running joke today, but now it’s built and they’ve seen it in use they all agree it’s been a good and creative use of the redundant space.’

Zoe was able to keep costs low by buying her materials direct from the builder’s merchant to cut out the middle man.

‘A close friend of mine is also a builder so his “mates rates” for labour were a godsend,’ she adds.

She continued to save money through DIY efforts in this utility room.

‘Other ways we saved money were by finishing off the smaller jobs ourselves like grouting the tiles and silicone sealing the dog shower instead of hiring a mastic man,’ she says.

‘Our garage was integral and we’d have never used it to store our cars so once we decided to convert it into a utility room the idea was even more attainable, there was this huge void under the stairs that needed filling.

‘Several people suggested making it a storage cupboard but we really didn’t need another cupboard in the house and let’s be honest, cupboards are boring. I thought to myself, “that’s where the dog wash will go!”

‘This isn’t our “forever home”, so I did wonder if installing something so niche would be a hindrance when we do decide to sell up and move house, but with something crazy like 33% of UK households including a dog I highly doubt that will be the case.

‘In fact, it’ll probably be a good selling feature!’

Do you have a story to share? We want to hear from you.

Get in touch: [email protected]