Look to Australia's most successful crime writers – names like Peter Temple, Jane Harper and Michael Robotham ­– and you'll find a dark chapter in their resumes: they all once plied their trade as journalists.

The same is true of much of our top crime writing talent, including former The Age writer and SBS correspondent Chris Hammer, whose Scrublands won a UK Dagger Award in 2019, and former ABC reporter and Q&A host Tony Jones, whose inside knowledge has fuelled a series of political thrillers.

It's not an entirely new phenomenon; hardboiled crime titan James M. Cain famously began his writing career pushing pen at the Baltimore Sun. But why do so many journalists turn to crime fiction? Not enough thrills in the day job? Such unlikely questions are the subject of a panel at the BAD Sydney Crime Writers Festival, to be held at the State Library of NSW this weekend. 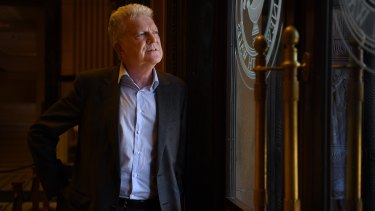 As part of this year's festival, two prizes will be awarded: the Danger Prize to Tanya Bretherton for her true crime book The Killing Streets, about Sydney's first serial killer in the 1930s, and the Danger Lifetime Achievement Award to The Sydney Morning Herald's Kate McClymont for a career spent "exposing corruption and cronyism in many unlikely places".

Veteran journalist and crime writer Michael Duffy, who is also chair of the festival, believes journalists have often turned to fiction as "a kind of natural progression."

"But I think they've turned increasingly to crime novels because crime novels themselves have become more important to us in recent decades," he said.

"My theory is it's the decline of religion. Human beings do have a preoccupation with death and morality and they used to deal with that by turning up to church and listening to a reading from the Bible and maybe a sermon, but I think a lot of people now get that from reading Michael Robotham or Chris Hammer or Jane Harper."

ABC journalist Michael Brissenden, who will appear on the festival's panel, says crime writing is liberating after the considered constraints of reporting work.

"You don't really have to worry about facts, you don't have to worry about libel, if you want to make a story go in a certain direction you can make that decision. For people who are trained to write faithfully about things that have happened, it's a different way of approaching writing and it's a lot of fun," he says.

"I also think sometimes in good crime fiction you can learn more about a cultural moment than you might do from heavily-drawn history," he adds. "If you read, like, Adrian McKinty's books about The Troubles in Northern Ireland in the 1980s, I think you learn as much, if not more, about what was going on for ordinary people at that time, even though they're fiction."

Sydney Morning Herald journalist Jacqueline Maley says, while not strictly crime fiction, her debut novel The Truth About Her, due out in April, has "some elements of mystery and thriller". Much like its lead character, a reporter who finds out the subject of one of her exposes has died by suicide, she says journalists possess traits that may be suited to crime writing.

"Journalists are usually pretty independent, quite lone-wolf types, they're reasonably cynical and they're very good observers. They're things that make for an interesting character, but they're also good skills you can take to writing a novel."

Now in its fourth year, the festival will also mark the first in-person writers' festival held in Sydney since the pandemic forced shutdowns in March.

"It's difficult for us because you can only have 30 people live in each room, but we thought we should do it as a mark of confidence in the return to normality for Sydney," says Duffy.

Guest speakers set to attend include ex-cop Gary Jubelin, Gold Dagger winner Michael Robotham and Tom Keneally, who will give a wide-ranging talk on the nature of evil.

"[The festival] is about what crime tells us about human nature and how bad behaviour affects people and societies and our culture," says Duffy. "Once you start looking at that you realise, especially in a city like ours which was founded by criminals, you can't understand Sydney unless you understand its crime. It's as simple as that."