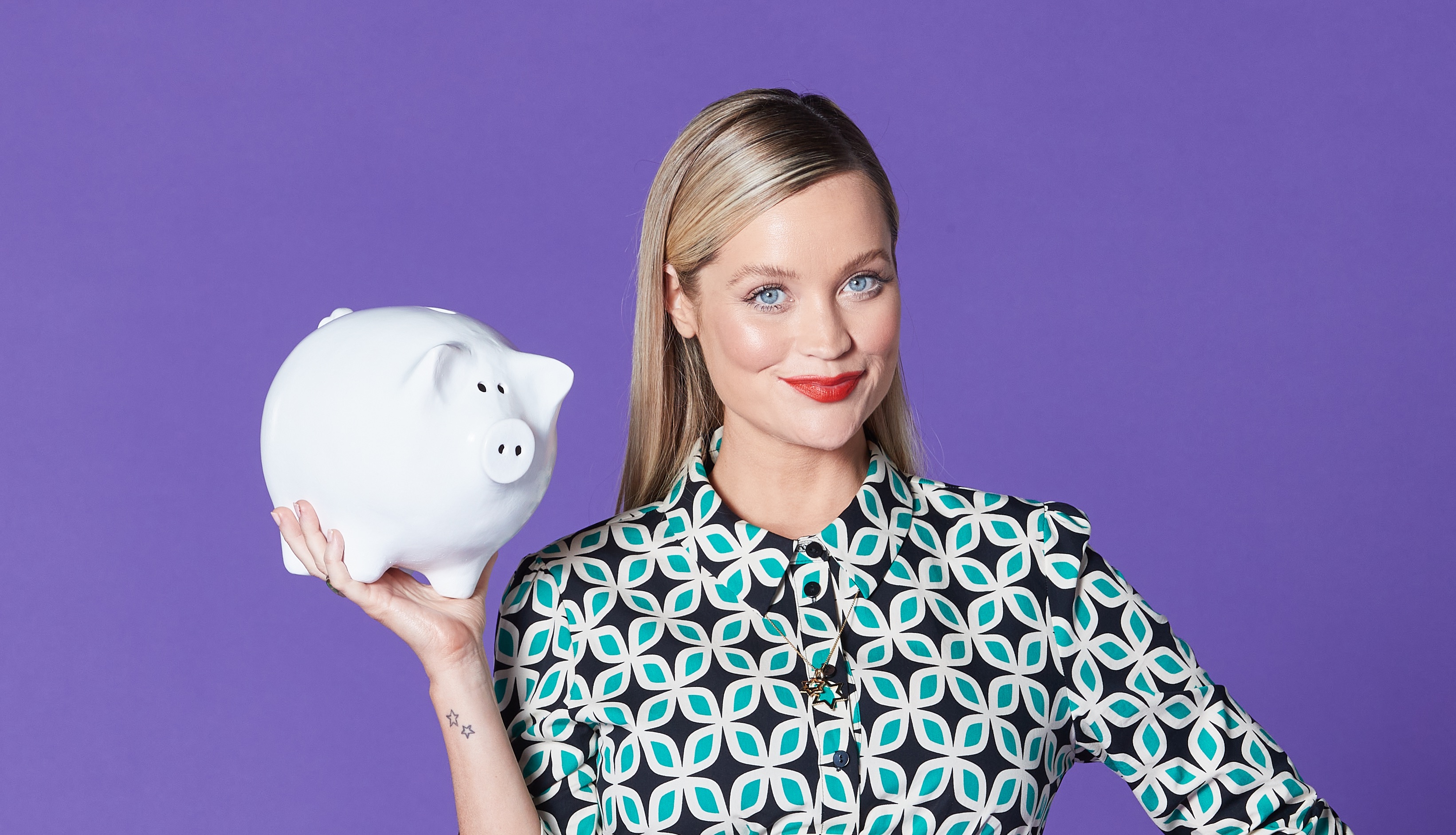 When I was born my grandmother, ‘Nanny May’ as I called her, gave me a Post Office savings account that she put £10 in every birthday.

Nanny May sadly passed away later that year and I don’t think I ever took the money out. I just topped it up, feeling good it was there.

I realise now that she wasn’t gifting me just money but the mentality of saving – having a financial safety net has always given me reassurance.

Arriving in London over a decade ago for my new job as a presenter on MTV, I began living ‘in the now’.

I came from a student lifestyle in Dublin, where I could get a pint for €2 at a student bar, to London. I got a big shock when I saw the price of a drink.

Plus, the rent in London was astronomical even then – I wanted to be in Camden near the MTV Studios and couldn’t believe the price for a small room in a house-share.

I remember the landlord asked for a month and a half’s rent up front – I hadn’t been paid yet. So, I had to ask my dad if he could lend me money. I’ve always hated asking for loans as I never want to rely on someone else. Dad was brilliant about it but I insisted on paying it back when I could, which I did.

To an outsider, my job probably seemed really luxurious but maintaining an extravagant lifestyle cost a lot – I knew I had to rein myself in and start budgeting.

I’m lucky as awareness of budgeting definitely came from my mum (as well as my Nanny May!). Raised by a single mother, she worked full time and was very much all about having your own cash and being independent.

People think presenting is glamorous but when I started I was doing my makeup in the toilets and borrowing friends’ clothes. I didn’t have a clue what I should be getting paid – I loved my job, I’d have done it for free.

Once I got an agent I realised you need to ask for more money in order to get it. But a lot of my friends in the arts or fashion industries confided that they didn’t feel they could ask for what they were entitled to – too embarrassed to ask for a higher wage or admit they were struggling to make ends meet.

I’d been there too, attending gigs back in the day, I remember the jolt in my stomach when the free bar ended and I saw how much the drinks cost.

Not to mention the dating scene; it must be the stubborn Irish woman inside me – but I’ve always insisted on splitting a bill 50/50. Women are equal so it’s only fair but the London dating scene is intense, and for my single friends, the costs add up.

Early on in my job at MTV, we flew out to LA and the crew split the bill for a meal – it was so expensive my entire budget for the week was blown! That was a big wake up call that I couldn’t afford to go out all the time – certainly not after every shoot day.

Of course, when the FOMO is real, you try to keep up with your friends but if we aren’t talking to each other about our money worries it can become isolating.

For women in their 20s and 30s there’s a bit of discomfort talking about money with friends but it’s important to factor in your income when making plans. I was aware that my mates were earning varying amounts, so we would often decide to do meals at home instead of fancy restaurants to make it easier on everyone.

One of my friends has always talked about what she calls the ‘runaway fund’ – having a bit put aside so she has the financial freedom to up and leave a situation if unhappy.

I remember a pal of mine told me about their parents – it wasn’t a good relationship – but their mum couldn’t afford to leave. Sadly, it happens, but no woman should feel forced to stay somewhere they are miserable.

Which is one of the many reasons why I’m getting behind the Master Your Money campaign by Laybuy.

Research has shown that the barriers females under 40 say are stopping them from taking control for their finances include stress (29%), a lack of understanding (25%), feeling overwhelmed (24%), and not knowing where to start (20%).

More concerningly, despite being stressed about their personal finances, the women surveyed also said they are reluctant to seek advice or talk to their friends about their money worries. Women are more than twice as likely to discuss intimate details of their relationships (16%), an embarrassing medical problem (11%) or politics (17%) than discuss their finances with their closest friends.

The campaign aims to empower women to take control of their finances after the study of 5,000 UK adults revealed that UK women under 40 are in the midst of a financial crisis.

We talk about physical and mental wellness often and it’s time to acknowledge that ‘financial wellness’ is something very important, too

Discussing these statistics with an old friend recently, I was shocked when she confided that she was in debt; she was so generous I’d always thought she had more spending power than me.

Everyone, at some point, gets into a tricky situation with money and there shouldn’t be shame around it. Discussing a problem makes you realise lots of other people are in the same boat.

I hope that we can remove the stigma by encouraging women to talk more freely about their money, and in doing so they can become better equipped for their future.

Being able to admit when you can’t afford something is vital. We talk about physical and mental wellness often and it’s time to acknowledge that ‘financial wellness’ is something very important, too.

I try to find the positive in most negatives and the pandemic has been a chance to reflect. Lockdown made me see how much I was spending on the small things; getting taxis and eating out. As the Covid-19 restrictions are lifted, now is the time to look at what we need vs. what we want and reclaim a bit of financial control.

The next generation will be better at asking for their worth – I hope young girls will feel more comfortable talking about money because we can give them that confidence by opening up the conversation now.

To take Laybuy’s all new 5-minute Financial Health Check, access tips and advice, and for more information about the Laybuy ‘Master Your Money’ Campaign; click here.