Diaz’s last film role was in 2014, but she’s still been very busy since then.

Cameron Diaz has been living it up since she stepped away from the acting world in 2014, venturing into new businesses, getting hitched and becoming a mom.

Appearing on Kevin Hart’s “Hart to Heart” talk show on Peacock this week, the actor wondered why she decided to break from TV and film in the first place though, asking her what “motivated” her to stop after appearing in “Annie” seven years ago.

“When you do something at a really high level for a long period of time, you know, when you’re the person that’s sort of delivering on this one thing,” she explained. “Everything around you, all parts of you, that isn’t that has to sort of be handed off to other people.”

“It’s kind of like realizing that one part of me that functioned at a high level wasn’t enough,” she added. 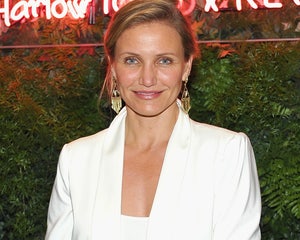 Cameron Diaz On Becoming a Mom in 'Second Half' of Life, Talks Marriage and Film Career

While she said she does “love acting” and it’s “fun to do,” her decision to take a step back was about wanting “to make my life manageable by me” and make a routine that “is literally what I can manage to do by myself.”

“I just realized I looked around and it was just so many parts of my life that I wasn’t touching and that I wasn’t managing,” she added. “I couldn’t really manage it because it was so big. Everything was so massive.”

Diaz’s career began with a “massive” debut in 1994’s “The Mask” opposite Jim Carrey and didn’t really slow from there. Soon after came roles in “My Best Friend’s Wedding,” “There’s Something About Mary,” two very successful “Charlie’s Angels” movies and the “Shrek” franchise. But after she put a halt to that on-camera career, she found time for more important things she’d been neglecting.

“I met my husband, we started a family,” said Diaz, referring to husband Benji Madden, who she was introduced to by Nicole Richie in 2014. “All of those things I didn’t have time for before and didn’t have the space to make the right decisions for me at the time to bring that in.”

“I feel whole,” she says of her life now, which includes daughter Raddix, who the couple welcomed in December 2019.

Diaz’s full episode of “Hart to Heart” is streaming now on Peacock.