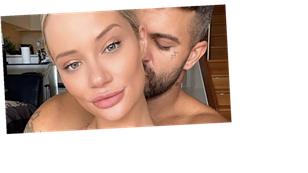 Married At First Sight Australia has had us all completely hooked.

The hit show that sees strangers, who have never met, take their vows to varying degrees of romantic success has been a source of entertainment for many in the UK as the lockdown continues.

But it has been over two years since series six of the show was filmed Down Under, and the cast members have all had a lot change in their lives since donning their wedding attire. One such star is whose life has changed since the hit show is Jessika Power, who is now dating rapper Filip Poznanovic.

Jessika, who lives in a very stylish apartment, was matched up with Mick Gould on the show, but things took a turn for the worst as she fell for newcomer Dan Webb.

Jessika and Dan revealed they’d been dating on and off during a seriously awkward commitment ceremony, however things didn’t work out between the pair. Now, Jessika, who looked very different before blonde transformation, is loved-up with her new man Filip Poznanovic, who she went public with earlier this year.

Filip, who goes by the hip hop pseudonym of Filthy Fil, reportedly met through her brother Rhyce Power.

It’s believed they met a while before things turned romantic, and Jessika has said of the pair: “He's a really passionate and goal-orientated guy, who's drive to succeed is what initially attracted me to him.

“We bonded over that actually, he wants to see me succeed and grow my platform, and is always encouraging me to put my energy into my business ideas and to complete my study.”

She added: “He's also really attentive and caring, and always puts my wants or needs above his without me ever asking, and I think that's something I'm just not used to, which made me realise what we had and where it could be in the future.”

Jessika, who boasts 306,000 followers on Instagram, often shares loved-up snaps with her boyfriend. Married At First Sight Australia: Take a look at where the couples are now and who stayed together

In a recent snap they cuddled and took a selfie, and Jessika penned: “IDGAF what people have to say about me so long as he sees the real me thats all that matters #happy.”

Jessika’s candid snap with her boyfriend comes after she was slammed as “vile” by MAFS Australia viewers in the UK. Fans of the show took to Twitter to praise Mick for showing his emotions and slammed “vile” Jess.

Another added: “Jess is VILE. Like beyond VILE. Tamara holds and and portrays herself exceptionally. Mick crying is breaking my heart.”