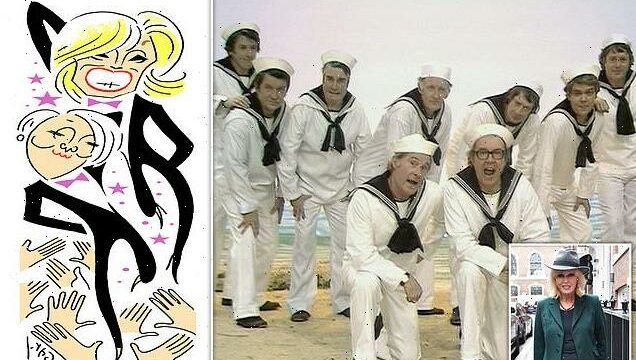 RICHARD LITTLEJOHN: When it comes to grown-up, no-­nonsense, plain speaking there really is nothing like a dame

Christmas wouldn’t be Christmas without repeats of the Morecambe and Wise TV shows.

And no re-run of Eric and Ern would be complete without the wonderful There Is Nothing Like A Dame routine.

Who could forget assorted BBC newsreaders and sports commentators, including Rugger-Bee League’s Eddie ‘Up’n’Under’ Waring and This Is Your Life’s ‘Ask’ Aspel, dressing up in sailor suits and making complete berks of themselves while singing and dancing along to the soundtrack from South Pacific?

OK, so it was 45 years ago. But it’s trotted out every Christmas and, at least to some of us, it’s as fresh as if it was yesterday.

I was reminded of this glorious sketch while reading the common-sense views of two of our most distinguished theatrical dames, Sheila Hancock and Joanna Lumley.

When it comes to grown-up, no-nonsense, plain speaking there really is nothing like a dame.

First out of the blocks was Lumley, aka Purdey and Patsy, taking a side-swipe at the sickening modern cult of alleged victimhood.

In a Prospect magazine interview, she said that back when she was a young actress, women were ‘a lot tougher’ than they are today.

‘The new fashion is to be a victim, a victim of something. It’s pathetic. We have gone mad.’

She slaughtered the dopey birds who pose in their flimsy knickers on the internet and then claim to be victims of sexism.

The latest recruit to this self-pitying breed appears to be Topshop model Kate Moss’s half-sister.

And, no, I’ve never heard of her, either, but I do read the papers and their associated websites for a living, and there’s no escape from these gormless girlies pouting provocatively into their mobile phones, while trying to hide the bog roll in the bathroom in the background.

Sorry, I don’t mean to come across all Glenda Slagg, but honestly . . .

Lumley was a bit of a sort in her day — the face that launched a million haircuts during her time in the New Avengers — but took it all in her confident stride. 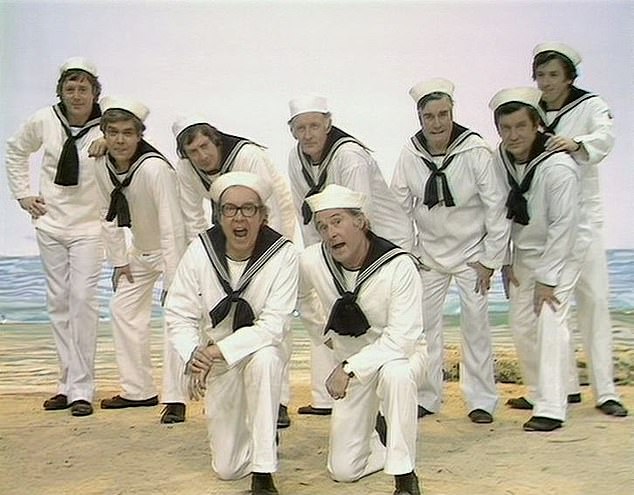 Eric and Ern were the butts of the joke, not their guests.

If anyone had made an offensive ‘sexist’ remark towards her, she’d have responded with a swift: ‘Get this in the wotsits from the start, mate.’

If some builder halfway up the scaffolding whistled at her in the street, she took it as a compliment, not an act of violence.

And if any man got a bit ‘handsy’, he’d have received a not-so-gentle slap round the chops, while she maintained a smile on her face.

‘Since when was it a badge of honour to cry?’ she asks. ‘When I was young, being brave meant hiding your tears.

Through bombing, separation, threat of invasion, hunger and death, the ethos of the ‘stiff upper lip’ and ‘grin and bear it’ prevailed.’

Quite right, too. I blame Lady Di. Or at least the reaction to her untimely death. Back then I wrote in the Mail: ‘When did the stiff upper lip become replaced by the trembling lower lip?’

In the aftermath of Lady Di, the world went bonkers. And we’ve never recovered. Her youngest son has now cynically monetised this self-indulgent nonsense, egged on by his shamless Z-list missus who claims to be a ‘victim of racism’.

Give me Dame Sheila Hancock and Dame Joanna Lumley any day of the week over the Duchess of Sussex — who sounds like a derelict pub on the Balls Pond Road.

It was my good fortune to interview both of them, back in the dim and distant when I did a bit of radio and TV.

My most fascinating guests were always women of a certain age — and I was only 30-something at the time.

Sheila Hancock was top of the pops, if a bit bristly — with good reason.

My brilliant producer at LBC — Nick Pisani, who went on to run Question Time — had described her as ‘wife of John Thaw’ on the running order.

Much as I loved Thaw, from The Sweeney, etc, Hancock was a big star long before him. We’re talking Rag Trade as a basis for negotiation.

Joanna Lumley was a delight, although even back then she had an obsession with the Gurkhas.

So were her Ab Fab pals Dawn French and Jennifer Saunders, two of Britain’s most talented writers/performers.

Actually, the day after Barbara Castle was on the show, Cindy Crawford turned up in a ridiculous stretch limo to promote a book on, frankly, who cares? I know who I’d rather have gone to the pub with. And we’re not talking Cindy Crawford here.

Another guest was the marvellous Scottish singer/actress/etc Barbara Dickson, about to perform a one-woman show at the Cafe Royal in Piccadilly.

For the best part of an hour, we never stopped giggling.

After interviewing her, I launched the Campaign For Real Women, dedicated to the death of the bimbo and the elevation of Proper Birds.

The following day, she rang me from Heathrow, where she was heading off on a world tour or something, offering — jokingly — to run away with me.

It never happened. Another suitcase in another hall.

And my beautiful, long-suffering wife of the past 48 years, Wendy.

Never for a single second have I considered them second-class citizens, under the cosh of the scumbag, racist patriarchy.

They don’t need role models. They are role models, just like Sheila Hancock and Joanna Lumley.

And like Eric and Ern, they’ve brought me sunshine.