There’s a sea of red costumes, top hats and spangled leotards, and a choir making up the backdrop, singing rich melodies alongside synchronised movements. 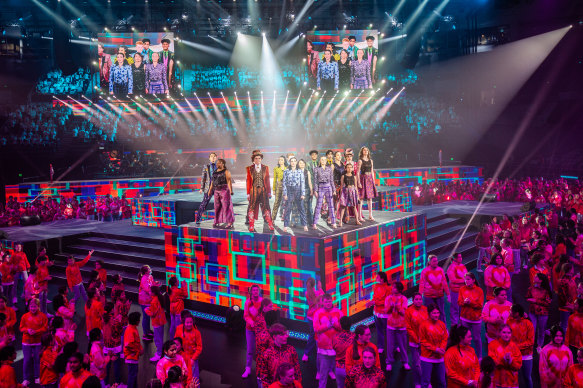 The 2022 Victorian State Schools Spectacular is nothing short of… spectacular.Credit:Scott McNaughton

This is the Victorian State Schools Spectacular – a three-hour live show worthy of its name.

Ashley Lucey-Jannert, 18, has been performing in the Schools Spectacular for 10 years, having debuted at age seven. For her, the show means more than just dancing and singing, it’s an avenue for friendship, self-discovery and mentorship.

“It means everything to me,” Ashley said. “I’ve dedicated pretty much every weekend of mine since I was about seven or eight to the show … I can’t imagine my life without being in the Spectacular.”

Ashley is now a principal vocalist and dancer, wowing the audience with her powerful voice, aptitude for choreography and chic purple pantsuit. Some of her numbers include You Can’t Stop the Beat from the Hairspray musical, Looking at Me (Sabrina Carpenter) and What I Said (Coco James). 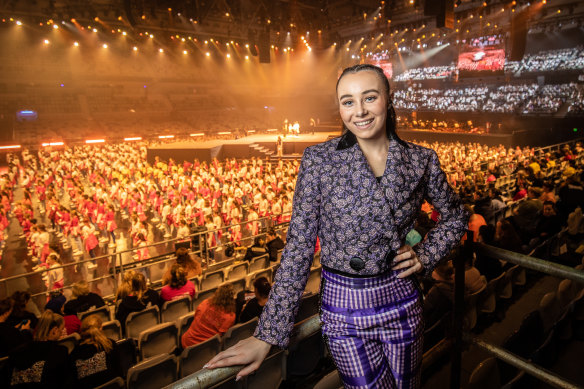 Ashley Lucey-Jannert is a principal vocalist and dancer in this year’s Victorian State Schools Spectacular.Credit:Scott McNaughton

She became aware of the Spectacular through her brother, tagging along to his rehearsals until having an epiphany that she was also destined for the spotlight.

“I came to watch [my brother] at the arena. I remember sitting in the audience, and I kept asking my mum, ‘Please can I go up there?’” she said. “She let me audition the next year, and I was lucky enough to get in. So ever since then, I’ve been on that stage.”

Aside from the 2015 show, when she became a principal singer (with her brother dancing backup – a fact she took great pride in), Ashley said this could be the year to beat – fitting, given it will be her final show as she approaches her graduation at Narre Warren South P-12 College.

As the first live show in three years, this year’s Spectacular is a chance to showcase Victoria’s young talent after waves of COVID-19 disruptions.

Featuring students from more than 200 primary and secondary schools across Melbourne and Victoria, it covers everything from daredevil skating and acrobatics to circus acts and giant puppetry.

“I get very emotional about it,” he said.

This year’s theme is ‘Time to Shine’ and features hits from artists such as Dua Lipa, The Beatles, David Guetta and Kate Bush. All were chosen by the students to reflect what matters most to them: community, friendship and the celebration of life. 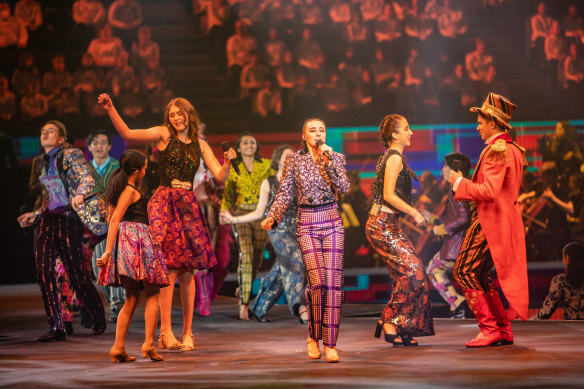 Ashley Lucey-Jannert performing her solo alongside other members of the cast during dress rehearsal.Credit:Scott McNaughton

Performing in front of around 10,000 people after months of training, it’s the students’ chance to learn what the arts can do for them, whether for their future careers or general well-being.

“The Spectacular has definitely helped shape me into the person and performer I am today,” Ashley said. “Some of the people who help us and mentor us are really well-known in the industry, and they give us so much knowledge that helps prepare us for the professional world.”

When the curtains close on Ashley’s final performance, she expects tears to mark the bittersweet occasion. After a long sleep and celebrations with her family, all she will feel is… Spectacular.

The Victorian State Schools Spectacular is on September 10 at 1pm and 6.30pm at John Cain Arena. Tickets are available now via Ticketek.