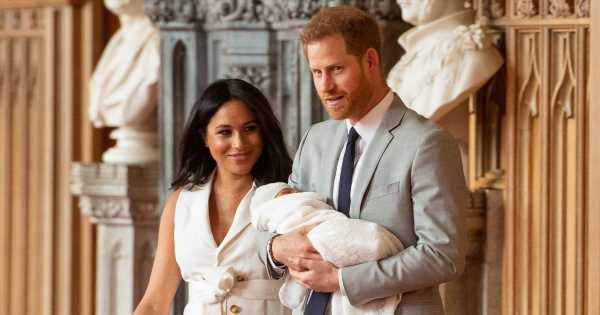 Meghan and Harry have been determined to dance to their own tune with the details they revealed about their son throughout the pregnancy and birth.

And when they unveiled baby Archie to the world earlier today – at a location and timing of their choosing – it was no different.

But despite calling the shots with everything, it didn't stop the proud new parents feeling a tinge of nervousness as they walked towards the selected members of the media awaiting them in Windsor Castle.

As they stepped through the doors into the majestic St George’s Hall – where they held their wedding reception just shy of a year ago – Harry, 34, was seen whispering something to his wife, 37.

Now Lip reader Tina Lannin has revealed to The Sun what the Duke said – and it's adorable.

As Harry took charge of the family's entrance he quietly told Meghan to "turn around" before looking at his new son.

He then uttered "he's so quiet" before he whispered "here we go" as he gave a wide grin to Meghan, The Sun reports.

Meghan went on to describe becoming a mother as being "magic".

She said: "It's pretty amazing. I have the two best guys in the world so I'm really happy.

"He has the sweetest temperament, he's really calm."

As they both laughed, Harry said: "I don't know who he gets that from."

Meghan added: "He's just been the dream so it's been a special couple of days."

Asked who the baby takes after, Meghan said: "We're still trying to figure that out."

Harry added: "Everyone says that babies change so much over two weeks we're basically monitoring how the changing process happens over this next month really.

"But his looks are changing every single day, so who knows."

Asked how he found parenting, Harry said: "It's great. Parenting is amazing.

"It's only been two and a half days, three days, but we're just so thrilled to have our own little bundle of joy and be able to spend some precious times with him as he slowly, slowly starts to grow up."