SUPERMARKET bosses have warned that food shortages in shops could last for as long as 18 months as shoppers face empty shelves.

Bare aisles have been spotted by customers across the country and now concerns are being raised over essential supplies such as bread and milk. 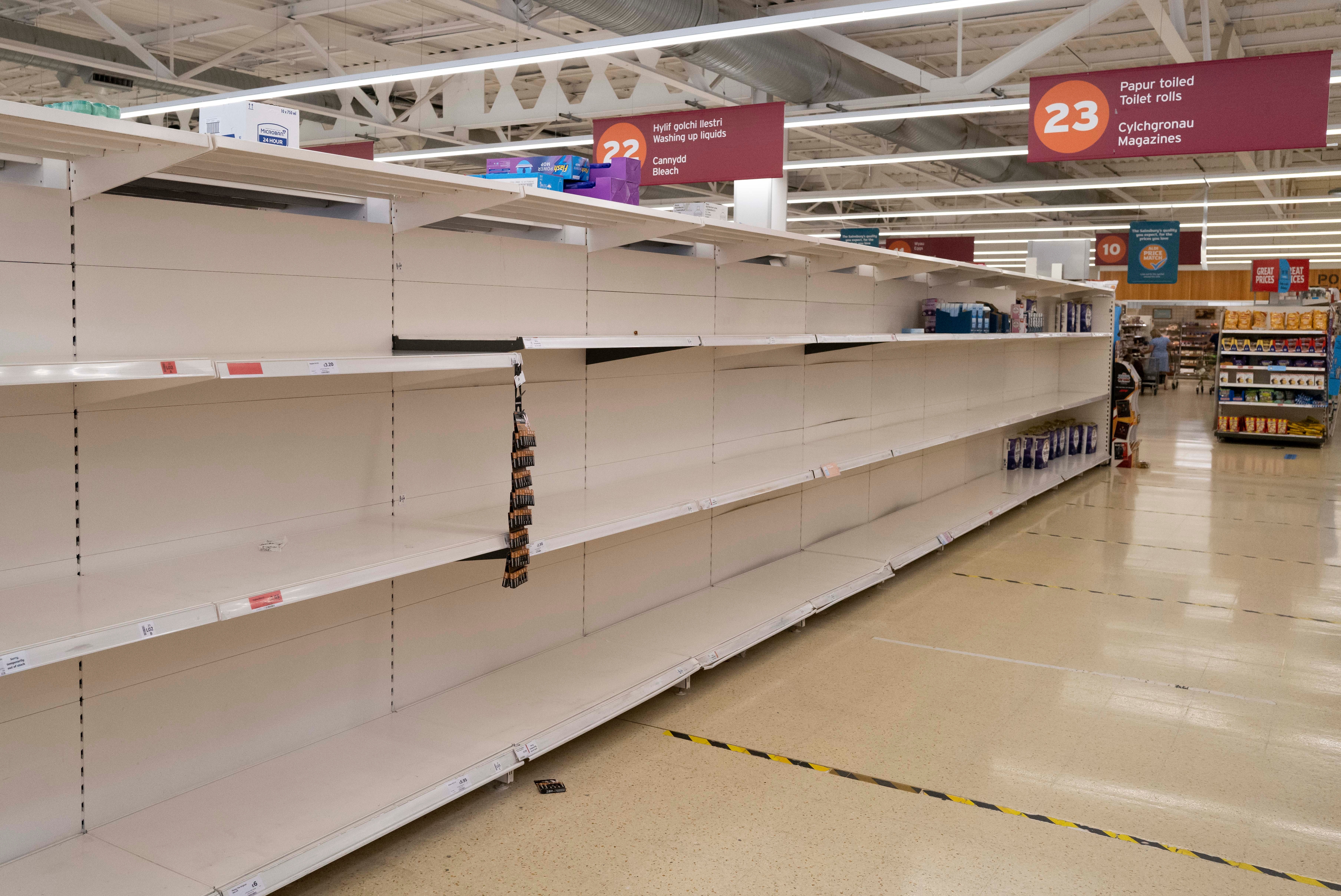 While Iceland boss Richard Walker warned Christmas could be cancelled if the crisis continues.

He told the BBC's Today programme yesterday: " "The reason for sounding the alarm now is that we've already had one Christmas cancelled at the last minute. I'd hate this one to be problematic as well."

We explain what's causing the shortages, and how long they could last for.

A number of factors are causing widespread shortages across Britain's supermarkets.

These include the impact of Covid, Brexit, and a nationwide lorry driver shortfall.

Industry leaders have been warning shoppers – and the government – for months that the nation could face shortages if urgent action isn't taken.

One of the main reasons why there are gaps in shelves is because there aren't enough lorry drivers to keep supermarkets fully stock.

It's meant that not enough deliveries are being made to stores due to the lack of drivers.

Experts estimate the nation faces a huge shortfall of 100,000 drivers.

Brexit has also been blamed for heightening the shortage, with thousands of delivery drivers flocking back to eastern Europe due to the impacts of the UK leaving the EU.

Businesses have been offering more money and cash bonuses to lorry drivers to plug the gap.

Some retailers, including Tesco, Asda and Marks & Spencer, are offering £1,000 bonuses to new HGV drivers.

Industry leaders have been urging the government for months about the crisis.

Trade groups including the Food and Drink Federation, British Beer and Pub Association and the Road Haulage Association wrote to Prime Minister Boris Johnson in June, urging him to allow eastern bloc drivers back into the country by adding them to the "shortage occupation" list.

It comes as The Sun launched a campaign yesterday to get Brits to fill the 100,000 empty driving roles.

Covid and the 'pingdemic'

Supermarkets have also struggled to get back on track after the "pingdemic" wrecked havoc for many businesses.

Millions of Brits were told to self-isolate after being "pinged" by the NHS app in July.

It meant that 20% of workers in the food sector were forced to stay at home – shortages got so bad that the army was put on standby.

An emergency government rule change meant that up to 10,000 supermarket supply chain workers were made exempt from having to self-isolate so shelves so shelves stripped of fruit and veg, bottled water, ice cream and beer could be restocked.

Businesses in the sector have also been facing a hiring crisis that has lasted for months.

Back in May, experts warned that a shortage of strawberries, raspberries, peas and lettuce could hit shoppers because foreign pickers have been unable to travel to Britain to harvest crops due to the Covid crisis.

It's meant there are simply not enough pickers to harvest the crop of items like strawberries, raspberries, peas and lettuce.

Seasonal workers coming to the UK are largely behind the fresh fruit and veg you see on supermarket shelves during the summer months.

But post-Brexit rules have tightened up visas for seasonal fruit pickers who come to Britain over the summer and help to get much-loved food out into the nation's supermarkets.

Other businesses are also struggling to hire enough staff to keep Britain's shelves stocked – and it could mean Christmas dinners this year suffer as a result.

Poultry farmers say they can't get enough staff – and will produce 20% fewer turkeys this Christmas.

Certain seasonal grub has been hit hardest by the crisis as demand for goods has far outweighed supply.

A sudden spike in demand created a flake shortage in May, for instance.

And shoppers were furious after supermarkets including Tesco, Asda and Sainsbury’s “ran out” of ice cream as Brits sizzle in soaring temperatures.

While this is not uncommon each year during the summer when the weather gets hot, the supply chain problems have made things worse.

How long will the shortages last for?

Industry leaders have warned that stripped back shelves could last well into next year.

He said that supermarket shelves were looking "ragged" and that this is "going to become the norm".

Mr Allen told The Independent: "At the moment it looks like disruption in the sector will continue into next year.”

Brits could see a shortage of festive grub too when Christmas comes around.

As well as a potential shortfall in turkeys, farmers are short of workers to pick produce and face higher costs to package cabbage, broccoli and sprouts.

Who else is suffering from shortages?

It's not just supermarkets suffering from shortages.

Fast food giants and chains including McDonald's, Nando's, Greggs and Costa have had to pull items from their menus temporarily due to supply issues.

McDonald's customers have been left frustrated by a lack of milkshakes and bottled drinks as the fast food giant has battled shortages.

While empty sandwich shelves at Greggs have been spotted in some stores – and chicken-based products are reportedly in short supply.

Costa is offering a reduced menu due to the supplier problems, with frustrated customers complaining about a lack of decaffeinated coffee too.

The Sun revealed earlier this month that Nandos was forced to close 50 restaurants due to a shortage of chicken.

KFC also revealed this month that some menu items would be unavailable following "weeks of disruption".