Scott Rankin has always had a thing for boats, boatsheds and the people who work in them. Which is understandable when you consider the writer and creative director of arts and social change company Big hArt spent the first 21 years of his life living – illegally – on a Chinese junk and in a boathouse moored on the Lane Cove River.

This unconventional lifestyle all started when his father, “a bit of a talker”, persuaded an old fisherman to let the family live in his boatshed at Woolwich. 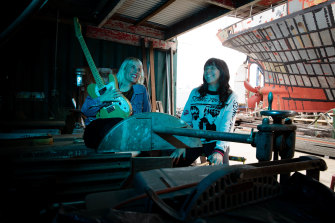 Jess Green and Bree van Reyk are among the performers taking part in the Acoustic Life of Boatsheds performances. Credit:Janie Barrett

“It was super cheap. There was nothing there,” says Rankin, Tasmania’s Australian of the Year in 2018. “They arrived with a mattress and put it on the rocks basically.”

However, even in the laissez-faire 1960s, the council was not happy with the family’s unorthodox living arrangements. 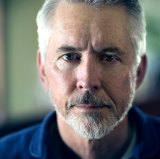 Listen to a space in new ways: Scott Rankin. Credit:

“Eventually the council said you know you can’t live here. So my dad thought he’d get a boat as well. He’s tall like me and he was looking for a boat with a high headroom and there was this Chinese junk for sale.”

He bought the boat cheaply and figured out how to get around the dead hand of the authorities.

It was a simple life Rankin remembers with great fondness.

“It was this really quiet childhood spent on water rather than on land so no one could spot us. I had one friend a couple of doors down but there were never any parties. Never any television. My whole world was the river and the upper harbour between Lavender Bay and Cockatoo Island.

“One of my favourite activities was paddling in an old plywood canoe – no life jacket, no sunscreen – up the harbour with a beach umbrella in the canoe then turning around and opening the umbrella in a nor’easter and sailing like a mad thing.”

Those idyllic early years also cemented in Rankin a love for the working harbour. For him a waterway composed only of party boats and tourists is a “shell” of itself.

“Anywhere where you keeping the craft of being a shipwright, or the craft of working on boats alive in the harbour adds to the life, providing it is environmentally sound,” he says.

With all this in mind, Big hArt, best described as a charity that uses the arts to bring about social justice, is staging a quirky event called Acoustic Life of Boatsheds at this year’s Sydney Festival, shining a light on the hidden working life of the upper reaches of the harbour.

Over four days, five musical duos will bring alive various working spaces with bespoke performances for audiences who will journey between the venues on the harbour by ferry. A similar event on Tasmania’s Tamar River was hugely popular at the 2021 Moma Foma festival.

Rankin has asked the sets of musicians to explore the resonant spaces and then respond musically, allowing the audience to “hear with their ears”. It was important, he says, not to be at all prescriptive when commissioning the composers.

“We don’t say, ‘Claire Edwards we want you to do this’,” he says. “We go, ‘Claire, here’s a space. It has amazing acoustic properties. So go investigate it and bring back what you’d like to do’.

“One of the gifts of composers is they can make you listen to the space and see in new ways.”