In a welcome glimmer of hope for Sydney’s devastated theatre scene, the first major production in the city has announced it will reopen next month.

Come From Away will begin playing again at the Capitol Theatre, Haymarket, on October 20. Tickets are now on sale through to November 28, with audience numbers capped at 75 per cent in line with the state government’s reopening plans. 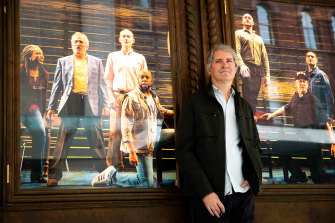 Come From Away producer Rodney Rigby can’t wait to welcome patrons back to the Capitol.Credit:Janie Barrett

Theatregoers aged 16 or over will also have to provide evidence of full vaccination before being allowed to take their seats.

Producer Rodney Rigby said he was excited that the lights were going on again after the show had to close on June 27.

“We’re absolutely thrilled to welcome audiences back to experience this extraordinary show and our cast are eagerly awaiting their return to the stage,” he said.

Come From Away is one of the more offbeat musical theatre hits of recent times, telling the story of the people of a small town in Newfoundland who suddenly had to welcome thousands of visitors after the attacks on the Twin Towers. It has won both Tony and Olivier awards.

And while Come From Away is the first production to announce a concrete opening date, companies including Sydney Theatre Company and the Michael Cassel Group, producer of Hamilton at Sydney’s Lyric Theatre, have confirmed reopening announcements will be made shortly.

Earlier this month, Rigby announced Come From Away would “lead by example” and become the first show in Australia to compel all performers to be fully vaccinated before being allowed to return to work.

Rigby said the company was on track to be fully vaccinated by the start of October.