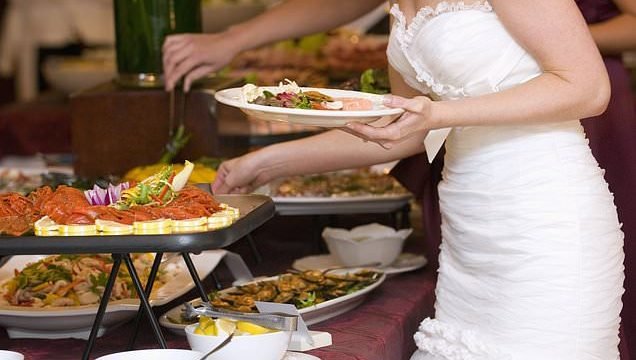 A buffet bandit! Bride reveals how a rude wedding guest filled TEN plastic containers with food and dessert to take home with her – and then grabbed beer and flowers on her way out

The very patient newlywed wrote about the incident in a closed Facebook group called That’s It, I’m Wedding Shaming, which was uncovered by Philadelphia’s WPVI-TV.

In her post, she recalled out a guest at her small wedding — whom she didn’t even know very well — arrived with ten Tupperware containers, which she proceeded to fill up with dinner and dessert to take home for later. 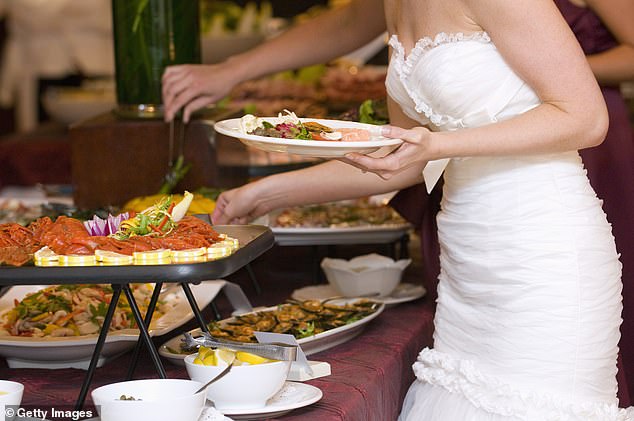 How rude! A Pennsylvania bride said one of her wedding guests filled up ten plastic containers with food and dessert — and took home beer and flowers, too (stock image)

‘My husband and I had a very small wedding ceremony and reception, probably about 25 people were invited. Only close family and a handful of friends,’ the bride explained.

One of those invitees was her dad’s best friend, whom she invited so he would have someone to socialize with besides her mom.

‘Anyway, a few days before the wedding, my dad’s friend asked him if it’s okay if his daughter and her husband came, and I didn’t have a problem with it.’

While some may have seen a person coming to a wedding without an official invite as a red flag, though, it wasn’t until later the bride realized her mistake.

‘So she shows up, without her husband, but with about 10 Tupperware containers. TO TAKE FOOD.

‘We has a buffet style wedding (I’m Polish in Western PA, and it’s kinda tradition in our area) and we had a cookie table.

‘She loaded up 7 Tupperware containers with food to take home, took about 3 containers of homemade cookies, a couple bottles of beer, and most [of] the centerpieces.’

The bride said she didn’t notice any of this going on, being that it was her wedding day and she was otherwise preoccupied. But her father told her the next day, much to her dismay.

And even more surprisingly — or maybe not surprisingly at all — the guest’s present was lacking something, too.

The bride went on to say that the woman isn’t poor ‘by any stretch of the imagination’ and is probably better off than the bride is.

‘I’m assuming it’s because she just freeloads from anyone and everyone she can! But seriously! Who tf does this? ‘

Commenters were mostly horrified by the guest’s rude behavior.

‘This audacity would p*** me off so badly,’ wrote one person on the message boards of The Takeout.

‘Some people just don’t know how to act in public. We attended our daughter’s band banquet. It was a buffet. One of the parents at our table finished eating, got another chicken leg and cut it into pieces, then asked the server for foil so she could take it home for her dog,’ wrote another.

‘Now I haven’t been to many weddings, but I’m pretty sure it’s typical of the married couple (or the hosting family, I guess) to take any extra food home. Just seems courteous to at least give them dibs on what they paid for/may not have been able to fully during the event,’ added a third.