The national science agency is making underground water banking for inland towns a top priority as global warming raises the risk of drought in Australia. 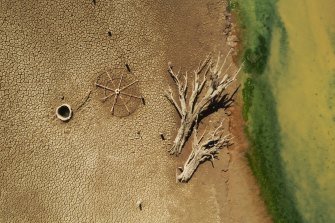 The Murray-Darling Basin in NSW and Queensland during the drought between 2015 and 2020, the most intense on record, leaving many towns at risk of running out of drinking water. Credit:Nick Moir

Water security for regional towns is already a pressing problem. The recent drought on the eastern seaboard was the most intense on record and by 2019 the Queensland towns of Stanthorpe and Clifton were trucking in water.

Dozens of towns across NSW and Queensland were within three months of running dry, spurring a spree of drilling across western districts, searching for new groundwater locked deep in the earth that had not been pumped dry like so many of the aquifers towns rely on.

CSIRO principal scientist Declan Page said a technique known as managed aquifer recharge can be used to supplement existing dams and borefields, and the Murray Darling Basin would be a good place to start.

Prime conditions for water banking are where an aquifer lies close enough to a river to pipe water to it, it’s shallow enough for the water to sink in quickly and there’s an ingress point with sandy soil where water can seep underground.

When inland rivers are running high some flow could be piped to an aquifer and banked for the inevitable non-rainy days.

“The reason we’re interested in the Murray Darling Basin is because there’s a water market where you can purchase water, so you buy it cheap when there’s a lot of water around and recover it when supply is at a premium,” Dr Page said.

“Dams can capture big run-off events quickly,” he explained, but many of them lose a lot of water to evaporation.”

Scientists are increasingly able to link particular weather events to human-induced global warming. A joint study by the Bureau of Meteorology and CSIRO found over the past 20 years there had been an 11 per cent reduction in crucial rains in winter over the southern Murray Darling Basin.

The drying trend is not as clear in the northern basin, but droughts are more likely and rainfall will become more sporadic as the atmosphere heats.

“The technology for water banking is known, it’s the analysis of exactly where the aquifers are the right sort and in close enough proximity to the town where you can move water along river channels to where you want to store the water and infiltrate it into the ground,” Dr Bonnett said.

Water banking is part of an ongoing research push that includes early analysis of new grain varieties that can be sown deeper in the soil than existing crops, so they can tap more soil moisture in dry conditions.

CSIRO is also continuing to invest in proof of origin technology to verify the location of Australian produce in overseas markets – so Australian farmers can charge a premium for quality, sustainably produced exports.