The NSW government acted faster than Victoria to direct some of its residents to stay home, but demographic differences and the rate of the outbreaks' growth make it difficult to directly compare the two states' responses, experts say.

NSW Premier Gladys Berejiklian urged northern beaches residents to stay inside on a day when the state recorded about a third of the daily COVID-19 cases that were recorded in Victoria before Premier Daniel Andrews first locked down Melbourne's hotspot suburbs.

The NSW Premier restricted indoor dining and instructed people in Sydney's northern beaches to leave home only for essential reasons on Saturday when the state recorded 23 cases. Fifteen local cases were recorded the day before and two the day prior to that. 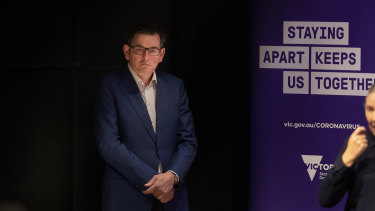 Premier Daniel Andrews at a press conference on June 30 when he announced a targeted lockdown of hotspot suburbs.Credit:Simon Schluter

The Victorian Premier first ordered a hard lockdown of 10 hotspot suburbs on June 30 when cases had peaked at 75 on a single day and there was an average of 39 cases in the 10 days before the announcement.

Mr Andrews on June 20 capped at five the number of people allowed to visit a home and limited capacity inside hospitality venues to 20 in each space. At this point, case numbers were in double-digits for several days and daily cases peaked at 25.

As 30 cases were recorded on Sunday, Ms Berejiklian encouraged people to wear masks but did not say face coverings would be mandatory. Masks were mandated in Victoria on July 19 when daily cases peaked at 363. The NSW Premier also capped the number of visitors in homes to 10 and reintroduced the one person per four square metre rule in venues.

It was on July 8 that the Victorian Premier placed all of Melbourne into a strict lockdown that eventually lasted more than 110 days. The NSW Liberal leader has resisted urging by some public health experts to enforce city-wide measures but has reserved the right to do so if there was evidence the virus had spread to areas outside the northern beaches. She has encouraged people in Greater Sydney not to undertake non-essential activities.

Sydney's northern beaches outbreak, which may also have been caused by an infection control breach at a quarantine hotel, has grown more rapidly than Victoria's. NSW has recorded 71 cases in the past week, many of them linked to the known cluster, after zero local cases the week before. In Victoria, there were only two days of double-digit daily case growth in the two weeks after the first case was identified at Rydges Hotel.

Professor Mike Toole from the Burnet Institute said a key difference between the two outbreaks was the demographic of those who were infected.

He said it was likely a large proportion of those affected in the early stages of Melbourne's outbreak were insecure workers who often had two jobs and lived in large migrant families, meaning they exposed more people to the virus once they become infected. He said those infected in Sydney's northern beaches were more likely to live in spacious homes and have one job.

"On the surface, the affected population in Melbourne were more vulnerable and that may have contributed to the rapid spread," he said.

"Having said that, the NSW spread is rapid. Two cases last week to 30 is rapid. It hasn't gotten to huge numbers but is very easily could.

"If it doubles tomorrow, then you're into triple digits and it can get away from you very fast."

Victoria was testing about 15,000 per day around the end of June while about 10,000 were being tested each day in NSW before a spike in test numbers after the northern beaches outbreak. Conducting more tests enables health authorities to better track the spread of the virus.

Raina MacIntyre, a Professor of Global Biosecurity with UNSW, said it was reasonable to compare the current situation in NSW to where Victoria was in late June when about 39 cases were being recorded each day and a targeted lockdown was instituted.

"NSW has done a targeted lockdown too, so that is a similar intervention," she said.

"Waiting until 100 cases per day to lock down the city (which occurred in Melbourne) is late, but there is more urgency in Sydney because of what time of year it is."

UNSW virologist Bill Rawlinson said it was difficult to compare the Victorian and NSW outbreak responses and argued the tools at the disposal of public health teams were more effective now than they were earlier in the year.

Professor Rawlinson said authorities now had rapid genomic sequencing at their disposal, allowing them to trace the origins of an outbreak more quickly. Rapid testing and superior outbreak management had also come about in recent months, he said.

"The amount of knowledge we have now about COVID-19 is tremendously more than we had in March and April … And, of course, all outbreaks are different."