The peak body for Australia’s universities, which is assisting the federal government in drafting new foreign interference guidelines, says it is unsure which countries besides China are potentially targeting students or exerting undue influence on campuses.

Universities Australia chief executive Catriona Jackson fronted Federal Parliament’s foreign affairs committee on Monday for a hearing to discuss the broader impact of foreign government interference in local Australian diaspora communities, following a recent Human Rights Watch report that revealed students and staff who criticised the Chinese Communist Party were at risk of being intimidated or harassed by pro-Beijing groups. 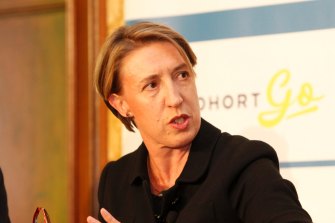 Universities Australia chief executive Catriona Jackson, who is on the federal government body drafting foreign interference guidelines for the sector, said she is not aware of which countries other than China could be targeting Australian universities. Credit:Eamon Gallagher

Ms Jackson – a member of the University Foreign Interference Taskforce (UFIT) – told the hearing individual universities and security agencies were in the best position to know which countries were targeting university students and campuses.

“This is certainly not a one-country problem, however, as the peak body we don’t have detailed knowledge of individual instances because, entirely appropriately, universities deal with the security agencies on a case-by-case basis,” Ms Jackson said.

“If I’m anecdotally aware, in a fairly casual sense, of there being other countries, it’s a matter of entirely private conversation. I don’t think universities would deny that these are certainly not one-country issues.”

Asked by the committee to provide a written list of countries on notice, Ms Jackson said: “I’ll do what I can to gather further information from vice-chancellors [but] it might be a question also to pose to my colleagues at ASIO”.

Universities Australia represents the country’s 39 comprehensive universities and has eight vice-chancellors on its board. UFIT was set up in 2019 to tackle foreign interference issues in the sector and also includes vice-chancellors, government department officials and representatives from security agencies.

Sophie McNeill, who authored the Human Rights Watch report, said she had verified three cases of students whose families had been contacted by Chinese police regarding the student’s activities in Australia.

“Despite the Chinese government in Beijing being thousands of kilometres away, many Chinese pro-democracy students in Australia say that they alter their behaviour and self-censor to avoid threats and harassment from fellow classmates and being reported on by them to authorities back home,” Ms McNeill told the inquiry.

But Ms Jackson’s evidence highlights the confusion in the university sector about which countries, other than China, are on the radar of Australia’s security agencies as the federal government bolsters its response to potential academic espionage and research theft. As part of this, UFIT is drafting new guidelines, due to be finalised by the end of the month, which include measures such as training staff and students how to identify and report foreign interference risks.

The drafting process has been complicated by the federal government’s policy of country-agnosticism on matters of foreign interference, which means it does not explicitly name the countries of most concern. University chiefs, for example, are fiercely resisting a proposal in the draft guidelines to force academics to reveal any overseas political memberships – a move that could cover tens of thousands of academics and apply equally to members of the US Democratic Party and the Chinese Communist Party.

ASIO director-general Mike Burgess warned earlier this year the scale of foreign interference in universities was higher than at any time since the Cold War, saying it was conducted by “more than one country [but] one country in particular is highly active”.

While the draft guidelines do not specifically name China or the CCP, Department of Education senior official Karen Sandercock, also a member of the UFIT, confirmed some measures had been informed by the Human Rights Watch report.

“We’re looking in much more concrete terms at what measures can be taken to prevent harassment and intimidation, and to give both students and staff mechanisms to report those incidents. So there has been quite a shift in emphasis over the last couple of years since we first worked on the guidelines,” Ms Sandercock said.

Labor backbencher Julian Hill, referring to an opinion piece by Australian-Khmer lawyer Sawathey Ek, questioned department officials about whether there were concerns about Cambodia and other illiberal countries such as Saudi Arabia exerting influence over diaspora communities.

“It’d be very helpful to us as parliamentarians to be able to get some guidance from your precise intelligence from the sector about what other diaspora communities may be under threat or where there may be issues,” Mr Hill said.

Ms Sandercock said the department was not aware of specific concerns about alleged misuse of Australian government scholarship programs by foreign governments.

Mr Ek wrote that since 2016 he had witnessed the influence of the Cambodian People’s Party, led by President Hun Sen, engage in a mass recruitment drive of students and community members in Sydney.

“Hun Sen’s network has been able to divide and disrupt our community harmony without scrutiny by the media or the government. Many students were recruited before they left Cambodia to study in Australia. In 2016, there was a mass recruitment drive involving at least 600 people in Sydney,” he wrote.