Australia’s Ambassador to the United States Arthur Sinodinos says a scientific arms race between America and China has created a boom in opportunities for universities to collaborate on defence and sensitive technologies research with our foremost ally.

Mr Sinodinos said the Biden administration was seeking out closer research collaboration with its allies and intelligence partners and was watching closely how Australia managed foreign interference risks inside universities. 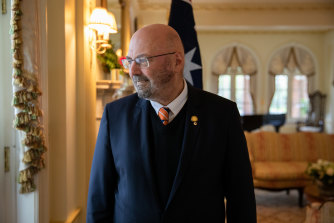 Ambassador of Australia to the United States Arthur Sinodinos has urged universities to capitalise on the research arms races between America and China. Credit:Amanda Andrade-Rhoades

“This new world of prosperity, science, and national security is likely to result in more interesting Five Eyes co-operation in university research,” Mr Sinodinos said in a keynote speech to a Universities Australia conference via videolink on Thursday.

He said research and development was “getting a lot of attention” in the US, where Congress was debating a bill for $110 billion for science and technology research aimed at countering growing strategic competition from China.

“[There are] lots of opportunities for partnerships. I know Australian universities do a lot in this area. But what I’m finding is that the scope for that … is actually growing and providing an increasing opportunity, particularly in as we face this geostrategic competition,” he said.

The opportunities for Australian researchers existed across “the whole panoply” of US government agencies, he said, including the Defense Advanced Research Projects Agency – the body responsible for developing emerging technologies for use by the military.

He added this collaboration would only be realised if Australian universities kept up to date with the US’s tightened controls around its research “and ensure that their own processes for due diligence and compliance are robust.”

“Our American partners are also watching very closely how we address issues like foreign interference in Australia,” Mr Sinodinos said.

He said the US had been Australia’s number one research partner since the 1930s. But whereas the US accounted for 70 per cent of total global research and development in the 1960s, it was now at 25 per cent and close to being matched by China.

The federal government has in recent years intensified its scrutiny on the foreign interference risks in the university sector. Under veto laws passed last year, the foreign minister has the power to cancel any research partnerships that are deemed contrary to Australia’s national interest.

Universities and security agencies have also formalised their working relationship with the creation of the University Foreign Interference Taskforce (UFIT) in 2019, which has developed guidelines on how to manage risks in research.

University of Newcastle vice-chancellor Alex Zelinsky urged his colleagues to comply with the guidelines rather than risk further crackdowns on the sector by the federal government.

“It’s best to be working with self-regulation, adhering to standards, rather than having a sledgehammer being imposed on the sector,” Professor Zelinsky said in a separate panel discussion on foreign interference.

“It’s just not right for the sector – overreach and poorly designed. We need to have a rethink on that,” Professor Zelinsky said.

Department of Home Affairs official Patrick Hallinan said the department was happy with how universities were managing risks through the UFIT process and there were “promising signs” no additional regulation was necessary at this point.

“They’ve had very close regard to the application of the UFIT … in forming a view that it is highly unlikely, I’d suggest, that there will be the sledgehammer coming down from a security or critical infrastructural perspective,” Mr Hallinan, the Deputy National Counter Foreign Interference Coordinator, said.