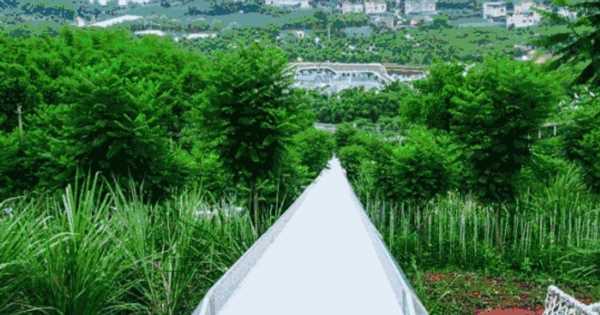 Two people have died and 12 have been injured in a horrific accident on a theme park ride dubbed the 'world's longest slide'.

The tragedy happened as the 14 tourists, including six children, were sitting on their own rubber rings, speeding down the 771ft slide before reportedly crashing into one another and falling off.

An investigation has now been launched into how the accident occurred at the ‘Children’s Yard' amusement park in Chengdu, in China’s south-western province of Sichuan.

According to an official statement by the local district office, eight adults and six children fell off the long stainless steel slide at roughly 5pm on May 1 during the country’s Labour Day break.

The visitors were each sitting on their own rubber rings, speeding down the 235-metre (771ftt) slide, but reports say the crowds collided into one another as some travelled faster than others.

The injured were taken to hospital and two adults have been confirmed dead.

A further 12 tourists continue to receive treatment for their injuries.

The district office says they have arrested staff members as part of an investigation.

They are also in touch with the victims’ families and have vowed to punish accordingly those responsible for the accident.

‘Children’s Yard’ has been temporarily closed as the enquiry continues.