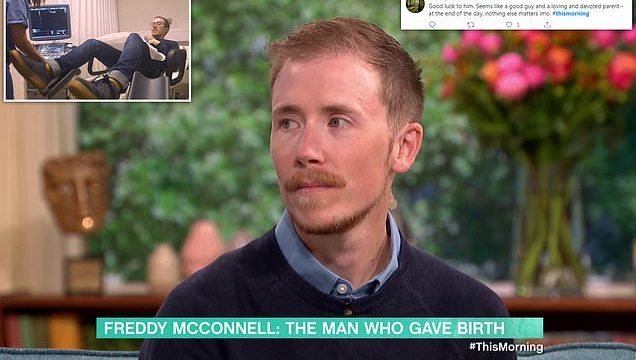 This Morning viewers have shown their support for a transgender man as he opened up about his fight to be legally named his child’s father on the birth certificate.

Freddy McConnell, 32, from the UK, hit headlines earlier this year after he gave birth to a son while legally a man after keeping his womb throughout his transition from a female and accessing sperm from a donor.

In today’s show, he explained how while he identifies as a man, he is legally considered the child’s mother – and added how others in his position could benefit from a change of law.

Twitter users were quick to praise Freddy, with one hailing him ‘amazing’ and another stating that regardless of his gender he seems like a ‘loving parent.’ 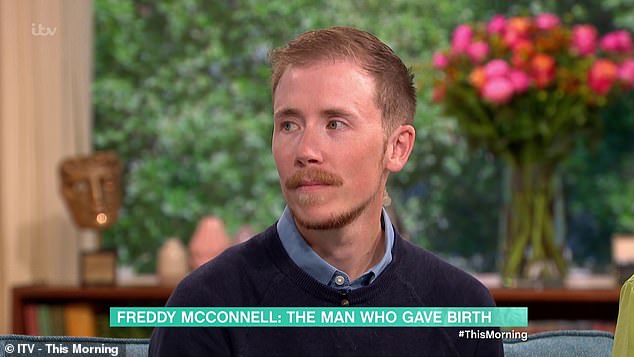 Freddy, 32 (pictured) appeared on This Morning where he opened up about how a change in law could be beneficial to him and other transgender and non-binary people

Those who tuned in were quick to offer their support to Freddy, with one writing: ‘Good luck to him. Seems like a good guy and a loving and devoted parent – at the end of the day, nothing else matters’

Freddy, who appeared on the sofa with his own mother, explained: ‘[It would help psychologically] If there was a way someone like me could go through this experience and be gendered correctly.

‘Someone in my position would be registered as the mother as it stands. There are actually lots of ways in which the law hasn’t kept up with society and families and the way families are created now.’

And many who tuned in to the segment took to social media to share their views – with one thanking the show for sharing Freddy’s story as it inspired her own non-binary child who wants to one day have a family.

‘Thank you for interviewing Freddy McConnell and his mum today,’ penned one. ‘Will be watching his documentary with my 13yr non-binary kid who also wants a family.’ 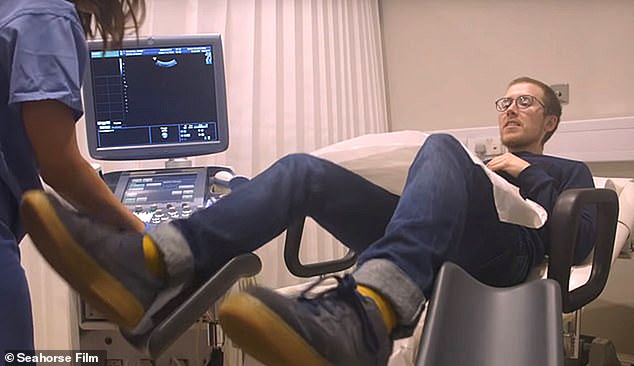 Another wrote: ‘Good luck to him. Seems like a good guy and a loving and devoted parent – at the end of the day, nothing else matters.’

A third commented: ‘It’s amazing that transgender man gave birth to his own baby. It’s disgusting that despite being legally recognised as a man at the time of birth, the General Registrar Office refuse to recognise him as the baby’s father.’

Freddy’s objections even led to a High Court battle against the Government, which was documented in his film ‘Seahorse.’ 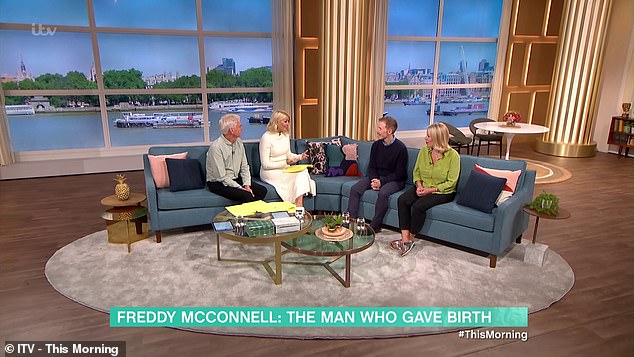 Freddy, who appeared on the show with his mother, also opened up about his hormone replacement therapy, insisting there is no medical evidence to support the idea testosterone can stop you having a baby

‘I thought this would be a great opportunity to share my experience. I think when you see the film you’ll realise it has a lot of things about it that are so universal.’

‘Seahorse is a label or badge of honor that someone like me might have, for people like me who are trans or non-binary and give birth to their own children.’

‘It’s perfectly safe and pragmatic and a wonderful thing to do depending on your desires and if you want to start your own family.’

Freddy also revealed that there is no medical evidence to support the idea that testosterone, which is used in hormone therapy for the masculine transition, can stop you from having a baby.

He added: ‘It might seem obvious, but actually there is no medical evidence to suggest that testosterone has an effect on your fertility.

‘I was given that warning and now I know that I shouldn’t have been, or we should be having a bigger and more holistic conversation about it.’