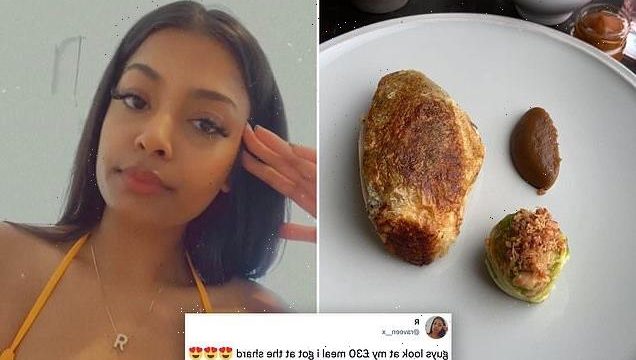 ‘Is that a microwaved jacket potato?’ Disgruntled diner’s ‘depressing’ £30 main course at The Shard baffles Twitter users as they try to work out what’s on the plate

A woman who was not impressed with the meal she was served at The Shard has left social media users equally baffled after they struggled to tell exactly what she’d ordered in a photo posted online.

Twitter user, @raveen__x, 21, visited one of the restaurants at London landmark on August 25th, and shared a picture with the caption ‘Guys look at my £30 meal I got at The Shard’, Raveen sarcastically followed the picture with heart eye emojis.

She later added that chips were five pounds extra and that her meal was an ‘L’—a slang term that means a loss.

The post, which quickly gained almost 10,000 likes, left other Twitter users confused as to what she actually had on her plate. 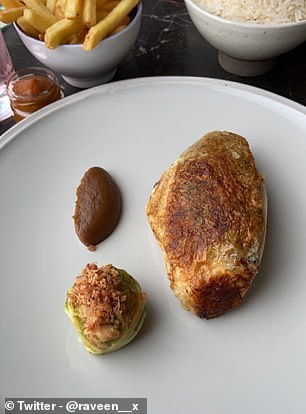 Twitter users could not decpiper what Raveen’s meal actually was when she ate at The Shard’s restaurant, Ting

One person commented, ‘I’d actually cry… imagine skipping lunch cos you know you’re going shard and this is what they come out with for £30. My condolences.’

While another sympathised, ‘Straight up thought that chicken breast was a depressed jacket potato for a second. Rolling on the floor laughing.’

A third person wrote, ‘I thought that was a flat jacket potato.’

Raveen later cleared up what the item on her plate was by saying, ‘that’s chicken by the way,’ but commenters were still unimpressed with the measly meal. 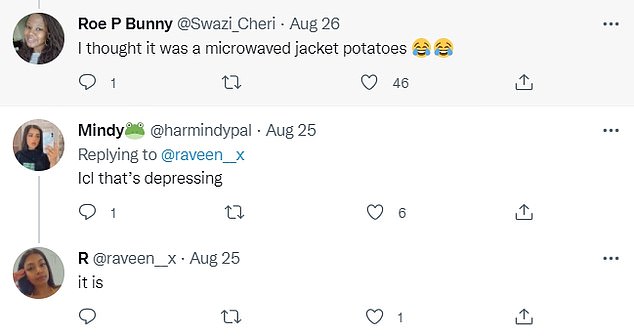 Commenters joked about what the food looked like and swore they couldn’t figure out what it was supposed to be, with one branding it ‘depressing’

‘It looks like the Bristol stool chart,’ joked one onlooker.

Another chimed in with, ‘I’ve seen all my friends Facebook posts of the restaurants in the shard I’m not going any time soon!! Plus I’m broke and hate heights. I’m good, there’s far better restaurants out there and the foods delicious.’

Raveen then agreed with a commenter who said that the meal looked ‘depressing’.

However, another asked what the diner expected while eating out at the UK’s tallest building, which cost £1.2 billion to erect.

They said: ‘Do you understand how much a building like the Shard costs to build, how much property is inside it and how limited the space is?’

‘You could have looked at the menu before. Obviously you’re going to be paying a premium. No one forced you to go there.’

Another claimed that the issue was with the presentation and not the side of the meal, pointing out the side dishes.

‘Bad presentation, that chef should be fired. But the portion looks right. If anything the sides seem quite generous.’