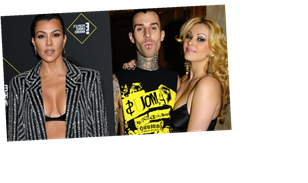 Yes, Travis Barker and Kourtney Kardashian are an item, but as random as that may seem, they appear to be doing very well together. The two lovebirds confirmed they were dating when Kardashian posted an Instagram showing herself holding hands with Barker on Feb 16. However, hours after the two became Instagram official, Barker’s ex-wife Shanna Moakler liked a comment shading Kourtney Kardashian, per E! News. The comment read, "Shhhhiiiii that broad don’t got nothin’ on you. Travis downgraded big time," and according to E News!, it was written underneath a post that Moakler shared just hours after Kardashian posted her sweet hand-holding pic. Yikes.

Moakler and Barker were married for four years before they got divorced in 2008. They share their two kids, Alabama and London, and their family has previously appeared on past episodes of Keeping Up With the Kardashians. Kardashian and Barker have been neighbors in Calabasas for years, and they were even rumored to be an item back in 2019 (though Barker denied it at the time). "Kourtney’s like a dear friend. That’s it," he told People in March 2019. However, fans realized the Blink-182 drummer might be more than friends with Kardashian when he posted a matching Instagram Story with her in January 2021.

According to People, Kardashian and Barker are "very happy" together. On Feb. 21, a source for the magazine reportedly claimed Kardashian "wanted to confirm their relationship, because it’s something positive," adding, "She feels very fortunate. She loves spending time with Travis." The insider also noted Kardashian didn’t expect her relationship with Barker "would turn romantic" so quickly, but since he reportedly "liked her for a while," she "got more open to the idea" of them being together. "Her family and friends all really like him. Their kids all get along too," the source reportedly added.

It seems like Barker even has the approval of Kardashian’s ex, Scott Disick. "Scott has been around Travis on several occasions and thinks he’s a great guy," a source reportedly claimed E! News when dating rumors first started circulating. "He’s really happy for Kourtney and is not surprised they are dating. Kourtney has spent a lot of time with Travis and it’s not shocking to him that they developed a romantic relationship."

The only thing that seems to be amiss in Barker and Kardashian’s new relationship is how Moakler feels about her ex-husband moving on. Although she may not accept his new romance with Kardashian anytime soon, hopefully she’ll come around after she realizes how happy he seems with the reality TV star.